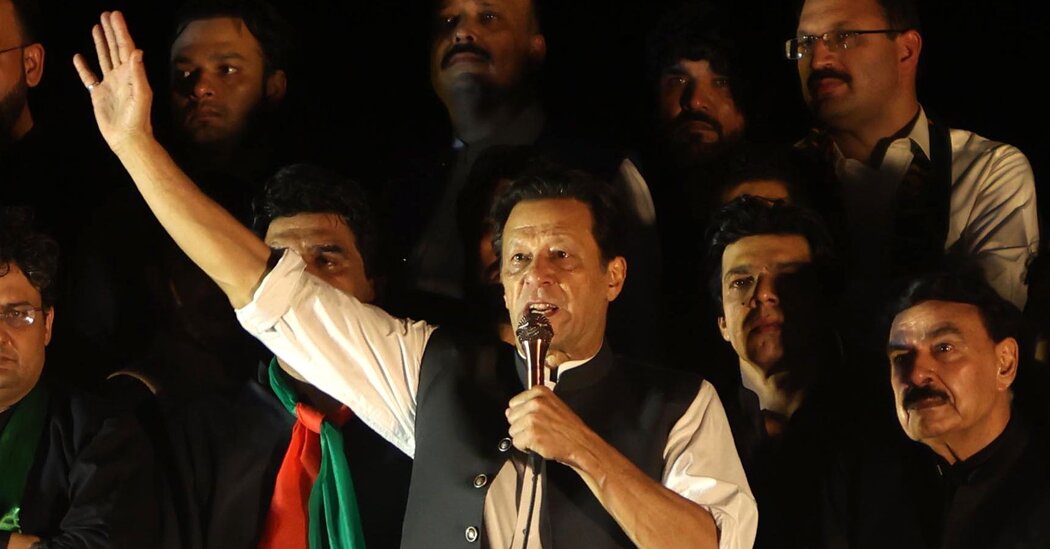 The move against Imran Khan is a major escalation of the power struggle between the government and the former leader and risks renewed public unrest.

ISLAMABAD, Pakistan — Pakistan’s former prime minister, Imran Khan, was charged under the country’s antiterrorism act on Sunday, in a drastic escalation of the tense power struggle between the country’s current government and its former leader that threatens to set off a fresh round of public unrest and turmoil.

The charges came a day after Mr. Khan, the former cricket star who was ousted from power in a no-confidence vote in April, gave an impassioned speech to hundreds of supporters at a rally in the capital, Islamabad, condemning the recent arrest of one of his top aides and threatening senior police officers and a judge involved in the case.

“We will not spare you,” Mr. Khan said, vowing to file legal cases against them.

The police report detailing the charges against the former prime minister said that his comments amounted to a deliberate and illegal attempt to intimidate the country’s judiciary and police force, local news outlets reported.

Mr. Khan was forced out of office in April, but since then he has proved that he remains a powerful force in Pakistani politics.

In recent months, the charismatic populist leader has drawn tens of thousands of people to his rallies across the country, and his party has successfully parlayed that influence into electoral success. In July, it won a sweeping victory in local elections in the most populous province, Punjab, and this month it also fared well in voting in the country’s economic hub, Karachi.

“Imran Khan is clearly an order of magnitude stronger than he was when he removed — the removal was probably the best thing to happen to him,” said Adil Najam, the dean of Boston University’s Frederick S. Pardee School of Global Studies and an expert on Pakistani politics.

Still, as Mr. Khan fights to make a political comeback, he and his supporters face a mounting crackdown aimed at curtailing his party’s electoral success, analysts say.

Pakistan’s media regulatory authority imposed a ban on the live broadcast of his speeches on news television channels. Several journalists and talk show hosts, who are sympathetic to Mr. Khan, say they have been harassed and threatened by the state authorities in recent weeks.

And a senior aide to Mr. Khan, Shahbaz Gill, was imprisoned earlier this month, accused of making anti-military comments on a television talk show. His call for military officers to defy orders from the top brass was an attempt to incite rebellion within the ranks, officials said.

The popular cable television channel on which Mr. Gill made those comments, ARY News, was subsequently forced off the air.

Mr. Khan and his party leaders say that Mr. Gill has been tortured and sexually abused while in custody, accusations that senior government ministers and Islamabad police officials deny.

Pakistan, a nuclear-armed nation with the world’s second-largest Muslim population, has struggled with political instability and military coups since its founding 75 years ago. Even under civilian governments, the military establishment is seen as the country’s primary power broker, and wields significant influence over electoral politics.

But the current crackdown on Mr. Khan is a stark change in fortunes for him.

When Mr. Khan was elected prime minister in 2018, many of his opponents attributed the victory to a back-room deal he struck with the country’s military. His political rivals described security forces as carrying out a campaign of coercion and intimidation that deterred opposition to Mr. Khan and narrowed the election field, ensuring his success. Military officials have denied those accusations.

Earlier this year, after Pakistan’s military leaders appeared to withdraw their support for Mr. Khan and eased their grip on his political opposition, he was ousted in a vote of no-confidence in Parliament.

In the months since, Mr. Khan has demanded fresh elections and accused the United States and Pakistan’s military of orchestrating a conspiracy to topple his government. During a speech Sunday at the garrison city of Rawalpindi, adjacent to the capital, Mr. Khan reiterated his attacks on the military over its role.

“Are you really neutral or not?” he asked.

Many fear that if Mr. Khan is now arrested, it could plunge the country into a new round of public unrest and violent street protests.

As word about his likely arrest spread, his party workers and supporters gathered at Mr. Khan’s palatial residence on the outskirts of the capital and chanted slogans against the government.

“Hundreds of people are gathered at the residence of Mr. Khan and thousands are headed here from other parts of the country to express support for their leader,” said Mr. Chaudhry, the senior leader of Mr. Khan’s party. “Police have now retreated after looking at the huge number of people here. Let’s see what happens next.”

Salman Masoodreported from Islamabad, and Christina Goldbaum from New York.

COVID crisis not over, following protocols must for protection: Adityanath