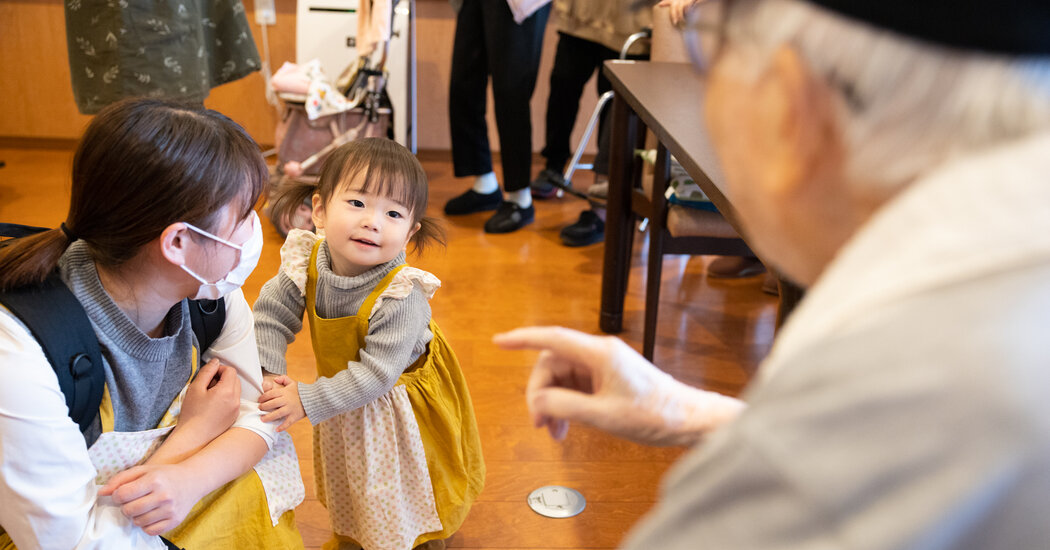 They get paid in formula and diapers, and their work hours are flexible, in a program that connects people across generations and brightens lives.

TOKYO — Cooing, giggling and the patter of tiny feet mix with the sound of walkers and wheelchairs at a nursing home in southern Japan. In this graying nation, one home has been recruiting an unusual class of workers to enliven its residents’ days.

These are “baby workers,” as the nursing home’s head calls them: 32 children so far, all under 4 years old, who spend time with its residents, who are mostly in their 80s. Residents strike up conversations with the young helpers. The babies, accompanied by their parents or guardians (usually mothers), offer the residents hugs.

The visitors’ reward? Diapers, baby formula, free baby photo shoots and coupons for a nearby cafe.

The facility, Ichoan Nursing Home, is in Kitakyushu, a city of 940,000 in Fukuoka Prefecture that is aging and shrinking like the rest of Japan. As families have become smaller and older people more isolated, the nursing home’s baby worker program has helped people connect across generations.

“I don’t get to see my grandkids very often, so the baby workers are a great treat,” said Kyoko Nakano, 85, who has lived at the nursing home for over a year. While she enjoys knitting and watching TV, she said she drops everything to spend time with the babies and toddlers when they arrive.

“They are just so cute, and they make the whole place brighter,” Ms. Nakano said. “Young energy is different.”

As Japan’s population has aged, the use of nursing homes has grown rapidly. The number in such homes more than doubled, to 1.8 million, between 2005 and 2020, according to the Japanese government. Life can be lonely and dull there, but at Ichoan Nursing Home, residents said that the babies brought energy and light.

Studies have linked social interaction with less loneliness, delayed mental decline, lower blood pressure and reduced risk of disease and death among older people. Socializing across generations has also been shown to draw older people out, making them smile and talk more. For children, these intergenerational interactions have been shown to enhance social and personal development.

The concept of letting nursing home residents interact with children is not new. In Seattle, residents of Providence Mount St. Vincent have shared their facility with a child care program for newborns to 5-year-olds since 1991.

Among Ichoan’s 120 residents, the oldest is 101, said Kimie Gondo, 58, the nursing home’s director. The youngest baby worker, at 2 months old, can barely hold his head up, she said.

Ms. Gondo said she was inspired to start the program last year when she took her newborn granddaughter with her to work and saw how the residents smiled and played with her. “I thought it was selfish to only have my granddaughter enjoy this special time,” she said, “so we decided to open it up to any baby that wanted to come do the same work.”

Expectations are loose for the little visitors, since they can be hard to corral. Toddlers are asked to stroll around the nursing home and interact with the residents, and parents help the babies circulate. “Nothing is mandatory,” Ms. Gondo said. “The babies decide when they come and for how long they want to stay.”

Parents at Ichoan, whose children are mostly too small for school or day care, said that the nursing home gave their children a rare opportunity to socialize safely at a time when Covid risks have kept many families cooped up. They said they trust that the nursing home has taken proper precautions against virus transmission to protect its vulnerable residents.

One mother, Mika Shintani, 31, said she signed her daughter up because she wanted her to encounter people beyond her immediate family. She also said she felt more comfortable taking her to the nursing home than to a park or a friend’s home. “My daughter was spending the majority of her days only interacting with me,” she said, “so I thought seeing other faces would be good for her.”

Ms. Gondo said that she had not yet seen a father accompanying a baby at Ichoan. Men in Japan do fewer hours of household chores and child care than in any of the wealthiest nations, according to the Organization for Economic Cooperation and Development.

On her daughter’s first day, Ms. Shintani said, she was 5 months old and cried when she arrived at the facility in her stroller. But she quickly warmed up to the residents and started laughing and playing with the women there, so they started going every two weeks.

The perks of the program are not just the tangible ones, like diapers and formula, she said: “On the days my daughter is hard at work, I don’t have to cook lunch!”

Britain’s ‘Brexit Festival’ Is Under Investigation Over Cost

Roland Garros 2021: Final in between Djokovic and Tsitsipas ends up being most viewed...