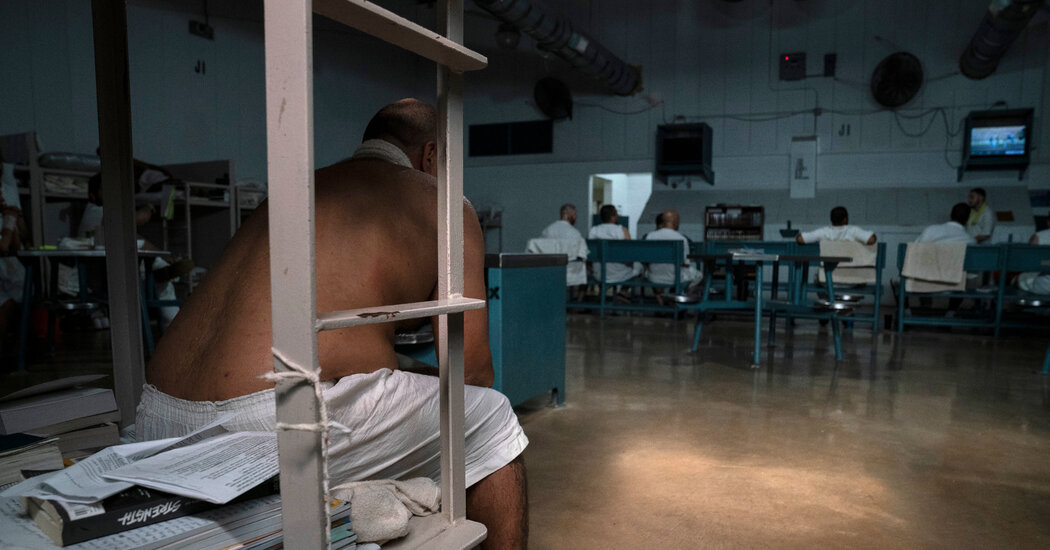 Texas is having its second-hottest summer on record, yet most state prisons and jails have little air-conditioning.

EDINBURG, Texas — Rashes from heat are common. Metal furniture is hot to the touch. Hyperthermia and dehydration are a constant risk, mitigated with fans, tepid water and wet towels. Deaths, though rare, have occurred.

This is life during much of the summer inside Texas’ stifling prisons, a majority of which have no air-conditioning for inmates despite increasingly extreme temperatures in the state.

For the men locked inside the dormitories of Lopez State Jail, dripping and desperate, a record-setting heat wave this summer created a feeling of misery bordering on hopelessness.

“It feels like you’re walking around in hell,” said Gary Crawford, a 44-year-old inmate from Houston who wore a sleeveless undershirt in the dormitory he shares with dozens of other inmates on a day when the temperature in the jail had reached 91 degrees.

On a recent weekday inside the minimum-security facility about 30 miles from the Mexico border, inmates draped yellow “cooling towels” around their necks and wiped away beads of sweat from their arms and faces.

“Everybody is always on edge,” said David Guerra, 42, from San Antonio, who has been at Lopez for nearly a year.

Texas, one of at least 13 states without fully air-conditioned housing in its prison systems, has faced costly lawsuits and scathing criticism for failing to provide its inmates with relief from withering indoor temperatures at a time when lingering heat waves have become an ever-more-relentless feature of Texas summers.

The state is coming off its second hottest summer on record, with an average daily temperature of 97.4 degrees. The area around the Lopez State Jail in Edinburg experienced 48 days of 100 degrees or above, according to the state climatologist.

Since 2000, there have been at least 17 heat-related deaths in Texas prisons, including 10 during a heat wave in 2011, according to the Texas Department of Criminal Justice. The last documented prison death was in 2012. This year, 12 inmates and 21 employees have suffered heat-related illnesses, prison officials said, although some inmates’ family members and supporters said they believed the number of heat-related illnesses was higher.

Although the Texas prison system has undergone court-mandated reforms, new prisons have not received extra funding for air-conditioning, prison officials said. There has been little political momentum in the state’s conservative Legislature to spend tax dollars on air-conditioning for inmates.

However, the state does require some inmates to have air-conditioning: those housed in jails run by the counties, which often house inmates who are awaiting trial. The Texas Commission on Jail Standards, a state agency, requires that all county jails keep the temperature from 65 to 85 degrees. But that standard does not apply to state-run prisons.

As a result, only one out of every three prisons in Texas is fully air-conditioned.

The New York Times was granted access to the Lopez jail this month during a state lawmaker’s fact-finding tour, a rare look inside a system that normally is closed to visitors.

“We can do better,” State Representative Terry Canales, a Democrat whose district includes the Lopez jail. He toured the prison ahead of the next legislative session, with plans to introduce new legislation on prison air-conditioning. A bill he introduced in 2021 passed the Texas House of Representatives but died in the Senate; both chambers are controlled by Republicans.

The Texas Department of Criminal Justice, which oversees the state’s 98 correctional facilities and its roughly 120,000 inmates, has a plan to completely air-condition prisons by the end of the decade at a cost of $1.1 billion. But it has yet to secure the funding from the Legislature.

Inside Lopez, there is air-conditioning in the hallways, but not in the dormitories that house inmates. Entering one from the cool hallway means confronting a withering blast of heat and humidity of the sort most people only experience climbing into a car parked in the sun on an extremely hot day.

During the visit, inmates were visibly sweating. Ismael Carrillo Gomez, a 32-year-old from San Antonio, displayed what he said was heat-related redness on his hands as he stood near his bunk without a shirt — a violation of the rules, though one that officials said was not enforced. (“If they need to take off their shirt, we’re not going to be writing disciplinary cases for that,” said Jason Clark, chief of staff of the Texas Department of Criminal Justice.)

Industrial fans were placed on the floors and ceilings as part of the state’s “heat mitigation” strategy, but inmates, who sleep on bunk beds and mingle in an open area with benches and tables, complained the fans only recirculated hot air. Lights in the dormitory were intermittently turned off during the day, an apparent attempt to reduce heat.

Inmates can request to be taken to “respite” areas in air-conditioned sections of the prison, and officials said they had access to ice and water. How often such requests for respite are granted was not immediately clear, but Texas Prisons Community Advocates, an inmate support group, said it had reports of inmates who asked to go to respite but were not allowed.

The men described the heat and humidity as a constant drain on their psyche, emotions and outlook, making them irritable and moody and raising the prospect for fights. A good night’s sleep is a rarity, they said. Some preferred to sleep on the floor where it was cooler.

“Nobody is going to say there was a fight because you got frustrated because of the heat,” said Mr. Guerra. “It’s always going to be another issue that led to it. But the heat provokes it.”