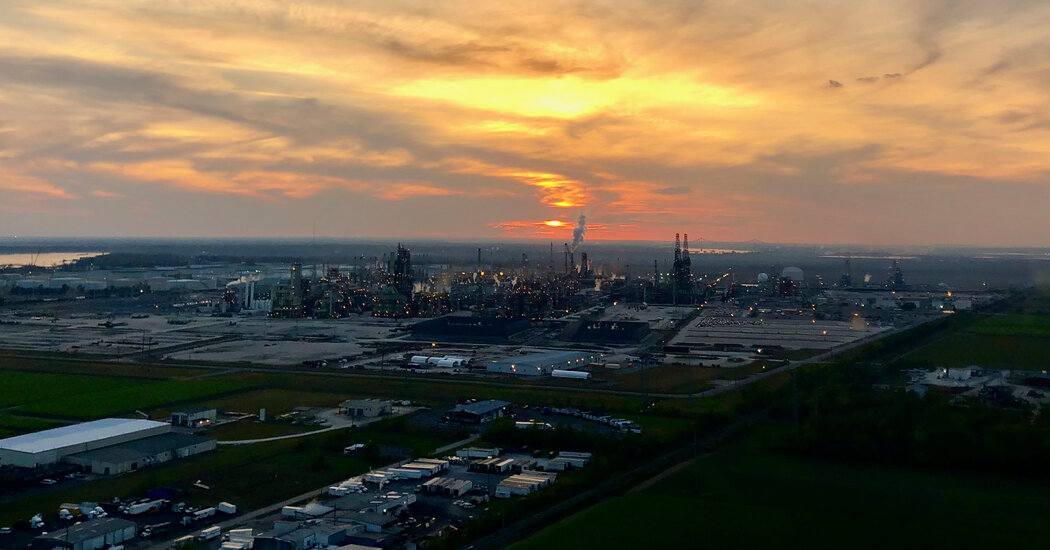 The company, an affiliate of Formosa Plastics, said it intended to move forward with the $9.4 billion complex in St. James Parish despite the ruling.

Louisiana activists battling to block an enormous plastics plant in a corridor so dense with industrial refineries it is known as Cancer Alley won a legal victory this week when a judge canceled the company’s air permits.

In a sharply worded opinion, Judge Trudy White of Louisiana’s 19th Judicial District in Baton Rouge noted that the residents in the tiny town of Welcome, where the $9.4 billion petrochemical plant would have been built, are descendants of enslaved Africans.

“The blood, sweat and tears of their ancestors is tied to the land,” Judge White wrote. “Their ancestors worked the land with the hope and dream of passing down productive agricultural untainted land along the Mississippi to their families.”

She said that when Louisiana state regulators granted 14 permits to FG LA L.L.C., an affiliate of the Taiwan-based giant Formosa Plastics, they had used “selective” and “inconsistent” data and had failed to consider the pollution effects on the predominantly Black community.

Relinquishing a fortune. Yvon Chouinard, the founder of the outdoor apparel maker Patagonia, transferred ownership of his company to a trust and an organization devoted to fighting climate change. The move comes at a moment of growing scrutiny for billionaires whose rhetoric about making the world a better place often don’t match reality.

High stakes. A new scientific assessment suggests that failure to limit global warming to the targets set by international accords will most likely set off several climate “tipping points,” thresholds passed which effects of climate change, from the thawing of Arctic permafrost to the loss of coral reefs, would probably become irreversible.

Melting ice. In a more drastic forecast than earlier assessments, a new study found that the melting of the Greenland ice sheet could eventually raise global sea levels by at least 10 inches. The study reached the conclusion in part because it used a different measure to gauge ice loss that takes into account the warming that has already occurred.

Forever chemicals. Scientists have found a cheap, effective way to destroy so-called forever chemicals, a group of compounds that pose a global threat to human health. The Environmental Protection Agency said it will designate the two most commonly detected chemicals, which have been linked to cancer and have been found in everything from drinking water to furniture, as hazardous substances.

The decision is the latest in a string of blows to the proposed petrochemical plant. Those who have been fighting the plant said they hoped it would be the death knell.

“People said you couldn’t do it, that the government approved it and I was wasting my time,” said Sharon Lavigne, founder and president of Rise St. James, a local advocacy group that led the suit against the plant.

The judge’s ruling cited Ms. Lavigne’s remarks to the court that the land where the plant would be built is “sacred.”

Janile Parks, a spokeswoman for FG LA L.L.C., a member of the Formosa Plastics Group, said in a statement that the company still planned to build the complex, which it calls the Sunshine Project.

The company “intends to explore all legal options in light of Judge White’s ruling as the project continues to pursue successful permitting,” Ms. Paris wrote. She argued the permits issued by the state were “sound” and that the project had met state and federal standards.

Greg Langley, a spokesman for the Louisiana Department of Environmental Quality, said that “we are reading the judge’s ruling and looking at our options.”

Ms. Lavigne, who lives in Welcome and whose grandmother is buried near the spot where the petrochemical complex would have been located, noted that St. James Parish was already home to 12 petrochemical facilities in a 10-mile radius.

“The air is toxic; you can’t drink the water; you can’t plant a garden,” Ms. Lavigne said in a telephone interview on Thursday. “I felt like these plants are cutting our life short.”

She likened the court victory to David’s beating Goliath and said that while she expected the company to appeal, “We beat them, and it’s going to stay that way.”

The plant would be the world’s largest production facility for plastics and raw materials for plastics. It has been on hold since November 2020, when the federal government suspended a permit amid protests from local environmental groups.

State and company officials have said 2,500-acre complex would create 1,200 jobs and add millions of dollars to the local economy. It also would release 800 tons of hazardous air pollutants per year by using ethane and propane as raw materials to make a variety of products, according to the lawsuit.

The canceled permits would have allowed the company to emit ethylene oxide, a substance that a 2016 Environmental Protection Agency study concluded could cause cancer even with limited exposure. It would also have emitted more than 13.6 million tons per year of greenhouse gases, the equivalent of 3.5 coal-fired power plants.

State officials had argued that the health of those living around the plant would not be affected. In her ruling, Judge White said the state had not conducted a cumulative assessment of the carcinogens and other pollutants that would be released and could not provide evidence to support its conclusion about the plant’s safety. She called the state’s decision to grant air permits “arbitrary and capricious.”

The town of Welcome is in a part of a district that is home to a third of the chemical plants in St. James Parish.

“It’s a shocking win that no one thought was possible a couple years ago,” said Abigail Dillen, president of Earthjustice, an environmental group that was among the organizations that had sued to overturn the permits. She called the decision “transformational” and argued that it would make it more difficult for state officials to grant permits to polluting facilities to operate in places where there is local opposition.

SL vs IND: Life in bio-bubble without playing is difficult, states Kuldeep Yadav

Read Your Way Through Cairo