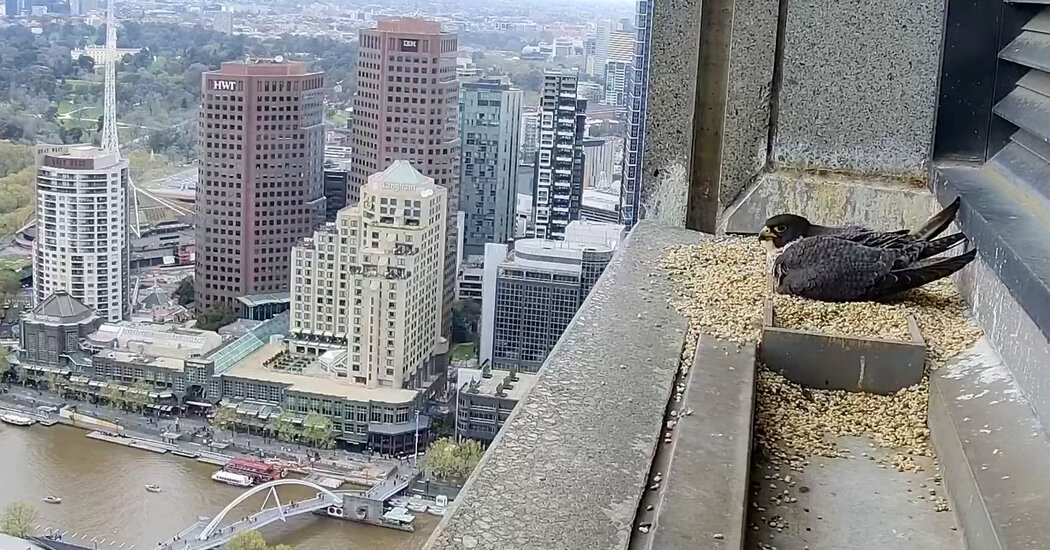 Peregrine falcons nesting in the city’s financial district offer riveting theater every day with their daily life, including sex, death and high-speed chases.

The Australia Letter is a weekly newsletter from our Australia bureau. Sign up to get it by email. This week’s issue is written by Meghan Dansie, a freelance reporter in Melbourne.

In the streets of Melbourne’s central business district, there is a routine buzz. Trams ding as they pass each other, and feet shuffle between shops and cafes, with a burst of bodies flowing from offices into bars and restaurants after 5 p.m.

But over the past few years, Melburnians have increasingly become aware of the lives in the skies above them, with a pair of peregrine falcons nesting in the city’s financial district attracting intense public interest.

Since 2017, the private lives of the peregrine falcons — the fastest species of bird — have been broadcast via livestream from Melbourne to the world. Their return for another season early this month prompted social media posts from the premier of Victoria, a surge of activity in a 30,000-strong Facebook group and the release of a children’s book.

In wilder places, peregrine falcons rear their chicks, or eyeases, in the protected nooks of cliff faces, where they have an easy vantage point to watch for prey and possible intruders. In cities, they have adapted to make the window ledges of tall buildings their homes.

Melbourne’s peregrine pair have an enviable view, with their nest box overlooking the nearby Yarra River and arts precinct. Victor Hurley, a wildlife ecologist who heads the Victorian Peregrine Project, first set up the nesting box at the site in 1991. He signs off his messages “raptorially yours” and has an enthusiasm that appears undiminished. He says that the Collins Street pair are the only peregrine falcons known to be nesting in the Melbourne area, where a reliable prey base allows them to use their best food-catching weapon: speed.

“They literally fall like a rock out of the sky,” Dr. Hurley said. “Peregrine falcons can actually accelerate past their terminal velocity just by diving. They shapeshift their body profile to go faster than they should be if they’re just falling.”

It’s not just the falcons’ physical feats that fascinate people. Every day, thousands tune into the livestream to watch these birds of prey go about their daily routines, which have the drama of a good reality TV program: sex, death and high-speed chases.

This year’s nesting season has been even more dramatic than usual, with a second, younger male successfully ousting the first male (and father of the egg clutch) from the site. The new male is now trying to breed with the female, even while she incubates her current clutch of eggs. Dr. Hurley says this recent plot twist has seen the online community “go off like a frog in a sock,” expressing concern about the intrigue and what will happen next.

“It’s a bit of wait and see,” he said. “We’re about eight days off finding out, and also finding whether she will lay any more eggs.”

And what has become of the original, banished male?

“He’s gone — either gone to God or he’s now what we call a ‘floater’, a nonbreeding male.”

Whatever happens to Melbourne’s peregrine family this season, interest in the avian soap opera doesn’t seem to be going anywhere. Sue Lawson, who wrote a book about the birds, “Peregrines in the City,” said that during the pandemic lockdowns, she found that the falcons provided a comforting glimpse that the broader world was continuing, despite everything.

“It was just this thing for me, of life keeps going,” Ms. Lawson said. “You know, there’s a whole world out there. It’s a bit of a drama, too, a real escape.”

Many may be drawn by the love triangle, others by a story of hope, but Dr. Hurley sees something else: “I think people’s initial fascination comes from seeing a pair of natural born killers in the financial district that aren’t corporate bankers.”

Now for this week’s news.

In a close race, Athing Mu comes away with the expected win.