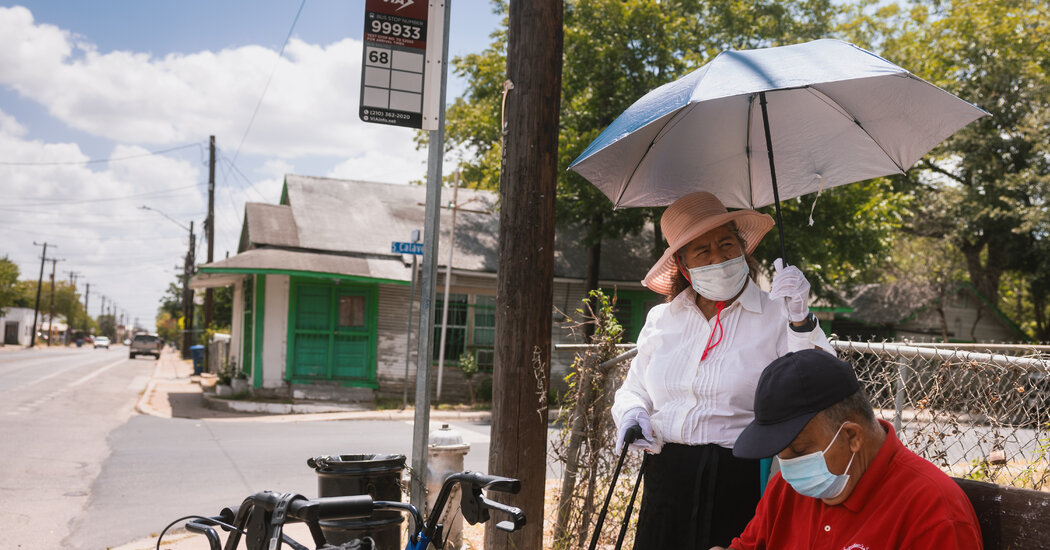 SAN ANTONIO — One day last week, Juanita Cruz-Perez poked her head out the back door of her two-bedroom home in San Antonio and shook her head no. It wasn’t quite noon yet, and the heat was already unbearable. She opened the front and back doors, praying for any kind of breeze, and turned on a plastic fan that sputtered hot air. She resisted the temptation to turn on the power-guzzling air-conditioner.

“The A.C. only goes on at night, no matter how hot it gets,” she said.

Ms. Cruz-Perez suffers from a slew of health problems that are exacerbated by the stifling heat, including diabetes and high blood pressure, but her $800-a-month budget leaves little room for what she would consider a luxury.

In San Antonio, weathering the second week of a heat wave that has been ferocious even by Texas standards, lower-income residents like Ms. Cruz-Perez are sometimes left with few options to relieve the misery. Not only can she not afford air-conditioning during the hottest part of the day, she lives in the Westside, one of several parts of San Antonio — nearly all of them working-class or poor neighborhoods — where there are few trees to provide shade.

Simple things like venturing into the back yard, walking to the store or waiting for a bus can be perilous.

“When you are poor, the sun finds you faster,” Ms. Cruz-Perez said.

San Antonio has seen at least 46 days of 100-plus-degree weather so far this year, according to the National Weather Service. Through July 25, measurements taken at the city’s airport have detected that all but one day in July has surpassed the 100-degree mark.

The heat wave has been blamed for a series of wildfires, including a blaze that damaged at least 29 homes Monday evening in Balch Springs, a suburb of Dallas. The heat has also tested the state’s beleaguered power grid. The Electric Reliability Council of Texas, or ERCOT, which runs the power grid, has pleaded for power conservation from those who can afford air-conditioning to avoid rolling blackouts.

High temperatures have afflicted much of the southern and eastern parts of the United States over the past two weeks, and have reached this week into the normally temperate Pacific Northwest. The oppressive impact is particularly visible in places like the San Antonio metropolitan area, a Latino-majority region where nearly 18 percent of the population lives in poverty.

The heat is inescapable in the city’s historic Westside, where the high ratio of asphalt to green space — along with old structures, freight trains and an abundance of concrete — creates the kind of “heat island effect” that is known to lead to higher energy consumption, more pollution and a greater risk of related health problems.

“It is the poor who usually end up suffering through these heat spells, because they lack the resources,” said Kayla Miranda, who heads the Coalition for Tenant Justice, an advocacy group that is pushing for more green spaces in San Antonio. “We feel forgotten by those in power. The wealthier neighborhoods have more green spaces, shade.”

Ms. Miranda knows this personally. She and her four children live in public housing, at the Alazan-Apache Courts, where her door opens onto a landscape of dry lawns and blistering sidewalks. She often struggles to pay the nearly $350-a-month electric bill to keep her children cool.

The heat is a lot more tolerable in San Antonio’s best-known area, the River Walk, where tourists drink margaritas from colorful plastic cups and ride boats under the shade trees that trace the placid river. The city’s wealthier neighborhoods, a few miles north of downtown San Antonio, are often adorned with soap-opera-style mansions, manicured lawns and lush green foliage.

The Westside, by contrast, is dotted with taquerias, small stores known as tienditas, and murals of the Virgin of Guadalupe and of folkloric singers that honor the neighborhood’s Mexican American history. A little more than a mile from the city center, the neighborhood lies next to Interstate 35.

San Antonio as a whole is no stranger to scorching temperatures. When the temperature hit 107 degrees on July 11, that was only the sixth hottest day since 1885, according to the National Weather Service; the hottest day on record, reaching a blistering 111 degrees, was 22 years ago.

Even so, scientists are increasingly finding that, as the climate warms across the globe, heat in urban areas is not distributed equitably. The National Oceanic and Atmospheric Administration is joining other agencies this year in mapping the distribution of heat in 14 cities around the country. Urban heat islands, often located in the neighborhoods occupied by lower-income residents and people of color, can be up to 20 degrees hotter than adjacent areas on summer days, researchers already have found.

In Austin, Texas, about 80 miles northeast of San Antonio, the University of Texas is using a grant from NOAA’s Climate Office to research the city’s hot spots and strategies for cooling them down.

These can include planting more trees, installing vegetation-covered or reflective roofs and canopies, and using “cool” pavement that absorbs more water than concrete or asphalt, according to the Environmental Protection Agency.

San Antonio officials said the city had created a campaign known as “Beat the Heat” to offer some temporary relief. Cooling centers are open during the hottest days, and residents are reminded through various media to stay indoors as much as possible, drink plenty of fluids and take frequent cool baths if air-conditioning is not an option.

But some residents in the Westside have to take a bus to get to the cooling centers. And with little shade, waiting for a bus can often be an excruciating experience.

On a recent day, Amelia Castillo, 67, walked slowly behind her husband, Antonio Castillo, 66, struggling with a walker, to reach a bus stop with no roof along Guadalupe Avenue in the Westside. Mr. Castillo settled onto an old wooden bench and winced as the sun baked his skin. His wife tilted a blue umbrella above their heads.

“It feels like the sun is getting hotter every day,” Ms. Castillo said. “And we are still in July.”

Minutes later, a bus arrived, and Ms. Castillo shared a surprised smile. “Sometimes we have to wait for 40 to 50 minutes,” she said.

Not far from the bus stop, Jessica Vasquez fanned herself with her hands as her three children and their Great Pyrenees puppy Simba took turns sipping warm water from the water fountain at Cassiano Park.

The pool at the park was closed, with a sign indicating that it would reopen on Saturday and Sunday from 1 p.m. to 7 p.m. “I wish it was open,” Ms. Vasquez said. “That would have been great. I don’t know why they close it during the week when the kids are out of school.”

Another pool less than a mile away is open during the week, a city pool worker said.

Susana Segura, who volunteers with a group called Bread and Blankets Mutual Aid, was spending the hottest parts of the week driving around poor neighborhoods to deliver water, mainly to homeless people, many of whom have disabilities. The homeless are especially vulnerable because they have nowhere to escape the arid streets and hot concrete, she said.

Ms. Segura stopped on a corner where there were signs of life — discarded cups and plastic chairs — and called out.

“Tenemos agua!” she said. We have water!

Elpidio Palacios, 56, rolled his wheelchair in her direction. He said he had lost both of his legs years ago when he fell off a train and landed on the tracks. He took a bottle of cold water from Ms. Segura and took a sip. He then showed off a straw hat that Ms. Segura had given him the day before — his version of shade.