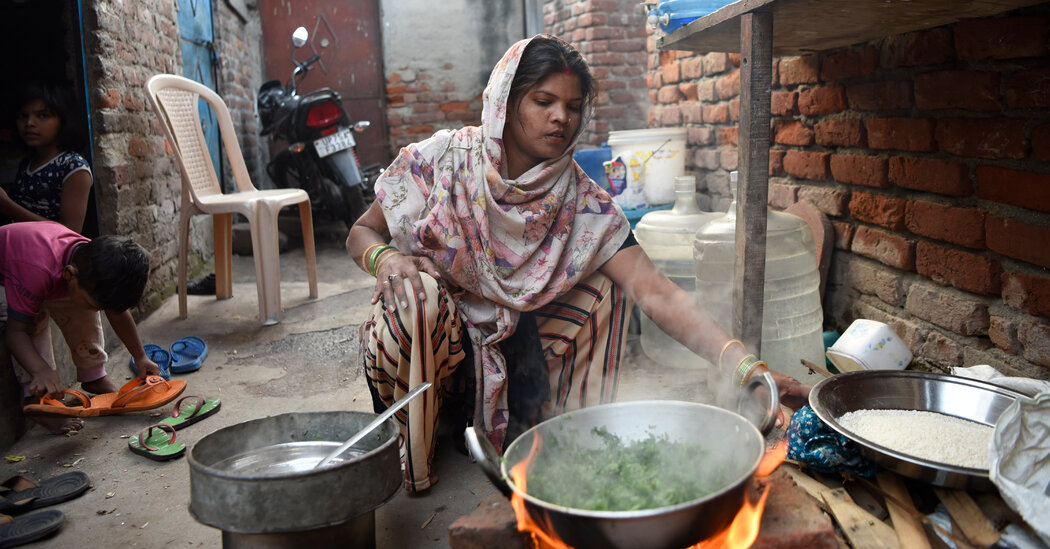 “I will not compromise on the availability of power,” India’s energy minister has declared in defense of fossil fuel use, which is heavily subsidized.

In the shadow of a retired coal-fired power plant in India’s capital, Meena Devi tries to make her family home — four brick walls with a tin roof — a safe place to breathe.

Though the smokestacks at the plant went dormant years ago under a court order, there is no shortage of hazards in her air, ranging from vehicular exhaust to construction dust to ash from crop stubble burning in adjacent states.

Emissions from the dozen coal-fired power plants still operating around the New Delhi region feed a toxic smog that hangs over the city each winter, imperiling people of all backgrounds. Sometimes, it is Ms. Devi adding to the smoke with wood fires she burns when her husband, a house painter, has no work and the family has no cash to refill the cooking gas cylinder.

While the central government gives poor families a small subsidy for cooking gas as a cleaner alternative to firewood, the main energy subsidies go to consumers of gasoline and diesel, mainly benefiting the middle class, and to producers, transporters and processors of coal as well as utilities that burn coal.

“My throat burns, and the kids are not able to breathe when I’m lighting the chulha,” Ms. Devi said, using the Hindi term for a wood stove. “What can I do? We’re not the only ones contributing to pollution.”

Ms. Devi is in the cross hairs of a global challenge: how to bring power to the world’s poor and fight climate change at the same time.

In India as in many other countries, political and economic considerations have yielded an energy strategy of simultaneously pursuing clean energy and burning fossil fuels, an approach that ultimately puts security ahead of climate.

Despite pledges at climate conferences to lead the world’s transition toward green energy, Prime Minister Narendra Modi’s government is in full expansion mode on the fossil-fuel front. Cheap, reliable prices for electricity and gasoline are its priority.

India’s subsidies for fossil fuels were nine times the size of clean energy subsidies in 2021, according to the International Institute for Sustainable Development.

The investments have boggled advocates of green energy, but officials say India’s ambitious economic growth targets — reaching annual gross domestic product of $5 trillion before the end of the decade, up from $3.2 trillion in 2021 — can be met only by sharply increasing dirty and cleaner energy sources alike.

“I will not compromise on the availability of power for this country’s development,” he added.

India will soon have the largest population of any country, so its choices will be critical not only for the health of its citizens but also for the prospects of limiting global warming to a sustainable level.

“India is pivotal to the future of global energy and climate policy,” said Amy Myers Jaffe, an energy and climate expert at the New York University School for Professional Studies. “Their emissions trajectory will be material on whether global emissions can reach net zero by midcentury.”

India’s environmental record is mixed at best. It has driven down the costs of renewable energy to some of the world’s cheapest rates, which should mean less smoky skies over New Delhi and other cities in India rated as having the world’s worst air.

Renewable energy in India rose to 163 gigawatts in August from a few megawatts in 2010, according to the Institute for Energy Economics and Financial Analysis, a research group in Cleveland. Moreover, renewables make up 40 percent of the country’s installed power generation capacity and are targeted to grow to 61 percent by 2030.

Yet coal is the foundation of India’s power system and the most persistent source of urban air pollution. The average coal-fired power plant in India is 14 years old, compared with a global average of 20. Coal plants normally function for 30 to 50 years.

India’s pledge to achieve carbon neutrality by 2070 leaves ample space for coal-powered generation to increase even as cleaner energy sources gradually take up a larger share of the energy mix. And a broad lack of regulation could mean far greater emissions before coal power peaks.

Yet Mr. Modi’s government has offered to finance a new coal-fired plant near the capital, part of an extensive pipeline of new coal infrastructure. It subsidizes publicly traded Coal India with $2 billion a year.

“The way coal is priced, subsidies are leading to higher air pollution from power plant emissions,” said Sunil Dahiya, an analyst at the Center for Research on Energy and Clean Air.

“The entire world knows that Delhi is a critically polluted region,” Mr. Dahiya added. “Contrary to that, they are trying to add one more plant,” he continued, referring to the Modi government. “It defies all logic.”

As it has for many countries, the war in Ukraine has made India alert to its dependence on foreign energy, particularly oil. It imports about 85 percent of the five million barrels it consumes daily. The government has opened up close to a million square miles of territory, including pristine coastal areas and offshore waters, for natural gas and oil drilling, drawing the attention of Exxon Mobil, Total and Chevron.

The investments in fossil fuels belie the increasingly compelling economics of renewable energy in India.

After more than a decade of both public and private investment, solar power is abundant in India and as cheap as any other energy source. An aggressive biofuels policy that has led to 10 percent ethanol blending saves the government $5 billion a year in oil imports. India is sopping up foreign direct investment in green hydrogen, so called because it is produced with renewable energy.

India’s national oil company, ONGC, is adding renewable energy to its portfolio, and Coal India has proposed setting up solar parks in reclaimed mining areas. Reliance, the giant Indian refiner, is trying to sell assets to Saudi Aramco to raise capital to expand solar panel production and establish green hydrogen infrastructure. Reliance and Adani, the largest coal supplier in India, have net-zero goals and have pledged tens of billions of dollars toward green energy projects.

Because India is the world’s third-largest emitter of greenhouse gases, its adoption of cleaner fuels could help the world avert climate disaster. Yet India’s projected energy demands include an astronomical rise in oil, gas and coal consumption. That suggests that the problem of India’s hazardous air quality — and tens of thousands of premature deaths it claims each year — could get much worse before getting better.

“We went into the transition, green, sustainability thing with a degree of passion that was almost religious fervor,” Hardeep Singh Puri, India’s petroleum and natural gas minister, said in an interview.

“But you’ve got to survive the present to be able to make a realistic transition,” he said.

India has taken advantage of Moscow’s supply of heavily discounted crude oil — now supplying about a quarter of its daily needs — to shield India’s state refiners from losses. Cheaper crude has also allowed New Delhi to protect its people from inflation by keeping pump prices low.

The government slashed excise duties on petrol and diesel twice in the last year, urging states controlled by Mr. Modi’s Bharatiya Janata Party to cut taxes, too. The move most likely helped the government avoid the political tumult over high gas prices and shortages seen in neighboring Pakistan, Sri Lanka and Nepal.

“More than inflation, we’ve shielded our population from chaos,” Mr. Puri said. “If you didn’t have gas,” he added, “all hell breaks loose.”

Half of emissions in Delhi, ranked as the world’s most polluted capital, come from vehicular traffic, but there is little incentive to drive less. Some 60 million people in India fuel up daily.

Yet many millions more in the country of nearly 1.4 billion get bad air with little benefit.

In Subhash Camp, the Delhi slum where Ms. Devi lives, women gather in a narrow lane strung with electrical wire and decorative strands of marigold. They describe the respiratory illnesses that their children were born with or that they soon developed, requiring expensive hospital treatment.

They also explain how free cooking gas canisters and subsidized gas in recent years have helped them control the environment in a small way for their children, and the consequences when there is no money for gas.

“My children say, ‘Please, Mummy, do not light the chulha — I can’t breathe,’” said Reshma, a construction worker and mother of three who goes by one name. “I think about the pollution, but I have to make food.”

After pledging billions of dollars for oil and gas exploration and the expansion of coal, the Modi government says it plans to pivot away from energy subsidies — but starting with the cooking gas, the subsidy that most helps the poor.