Federal prosecutors filed charges on Monday against the man the police said broke into House Speaker Nancy Pelosi’s San Francisco home and struck her husband with a hammer.

Federal prosecutors charged the man accused of breaking into the San Francisco home of House Speaker Nancy Pelosi with attempting to kidnap Ms. Pelosi and with assaulting a relative of a federal official, according to charging documents filed on Monday.

The suspect, David DePape, 42, was apprehended by the police at the Pelosi home in the early morning hours on Friday. The police said he forcibly entered through the back door of the house, encountered Ms. Pelosi’s husband, Paul Pelosi, 82, and, following a struggle over a hammer, struck him with it.

Mr. DePape was looking for Ms. Pelosi, who was in Washington at the time, to interrogate the speaker on an unspecified political matter, according to the federal complaint. If she told the “truth,” he would let her go; if she “lied,” he intended to break her kneecaps because he saw her as “the ‘leader of the pack’ of lies told by the Democratic Party” and wanted her to be wheeled into Congress as a lesson to other Democrats, Mr. DePape told police officers in an interview.

He had “a roll of tape, white rope, a second hammer, a pair of rubber and cloth gloves, and zip ties” according to the U.S. Attorney’s Office for the Northern District of California, which filed the charges.

The swift action by the Justice Department in bringing federal charges — on the same day the San Francisco District Attorney’s Office filed its own charges against Mr. DePape — reflects the department’s urgency in addressing what it sees as a politically motivated crime shortly before the 2022 midterm elections. There has been a surge in threats and attacks against figures of both political parties in recent years, and Ms. Pelosi, in particular, has long been the subject of vilification and threats. 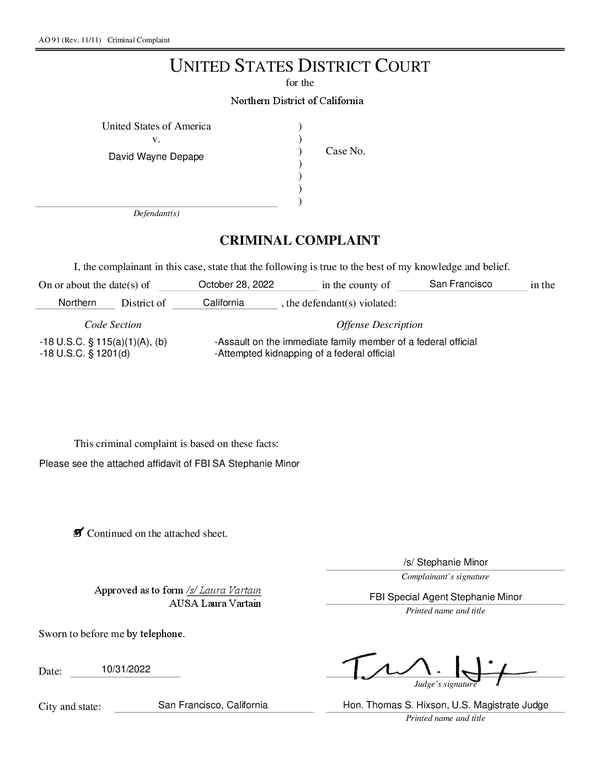 Mr. Pelosi, who alerted the police, underwent surgery on Friday after sustaining a fractured skull and serious injuries to his hands and right arm, according to a spokesman for Ms. Pelosi. Mr. Pelosi remains in the intensive care unit of a San Francisco hospital, surrounded by his family, according to a person familiar with the situation.

Law enforcement officials said that Mr. DePape sustained “minor injuries” and was treated at a hospital.

The affidavit from an F.B.I. agent that accompanied the charges provided the most complete, and chilling, narrative of the break-in to date. It detailed a groggy early-morning home invasion that culminated with a single, sudden hammer blow, delivered in the presence of shocked police officers.

Mr. DePape broke a glass door and entered the residence, awakening Mr. Pelosi, who confronted him and then ducked into a bathroom to call 911 at 2:23 a.m. Officers with the San Francisco Police Department arrived eight minutes later to find the two men struggling over a hammer.

When they asked what was going on, Mr. DePape “responded that everything was good,” the agent wrote. At that moment, Mr. DePape yanked the hammer from Mr. Pelosi’s grip and struck him once in the head, rendering him unconscious on the floor.

The officers quickly restrained Mr. DePape, who told them he had left his backpack near the smashed door window on the rear porch. When they examined its contents, they found another hammer, tape, rope, two pairs of gloves — rubber and cloth — and a journal.

The police recovered the zip ties in the bedroom. Mr. DePape later told officers he had intended to tie up Mr. Pelosi until the speaker arrived home.

Kidnapping and assault are usually charged under state laws by local authorities, but in extreme circumstances, such as cases involving federal officials or judges, they can become federal crimes.

If convicted, Mr. DePape would face a maximum of 20 years in prison for the attempted kidnapping of a federal official in the performance of official duties, and up to 30 years for assaulting an immediate member of a federal official’s family and inflicting a serious injury with a dangerous weapon.

Ms. Pelosi’s spokesman had no comment on the charges.

It was not immediately clear who was representing Mr. DePape in the case.

Federal law makes such an assault a federal crime when it is done “with the intent to impede, intimidate, or interfere with” the work of an official or “with intent to retaliate against” that person — a charge that stems from Mr. DePape’s attempts to find the speaker.

The attack on the Pelosi home in San Francisco contained echoes of the Jan. 6, 2021, mob attack on the Capitol. When rioters broke into the halls of Congress on that day, some of them carried zip ties and shouted, “Nancy, Nancy, where are you, Nancy?” When he was apprehended on Friday, Mr. DePape also was carrying zip ties; a person who had been briefed on the attack said Mr. DePape had been loudly demanding to know where Ms. Pelosi was.

Law enforcement officials have not specified the exact motivation for the attack, and much remains unknown about Mr. DePape. But the authorities have been examining what appeared to be Mr. DePape’s copious online presence, which included angry rants and extremist views.

The domain of a blog written by a user who called himself “daviddepape” was registered to an address in Richmond, Calif., in August, and a resident close to that location said that Mr. DePape lived at that address. From August until the day before the attack on Mr. Pelosi, the blog featured many antisemitic sentiments as well as concerns about pedophilia, anti-white racism and “elite” control of the internet.

One of the blog posts suggested that there had been no mass gassing of prisoners at Auschwitz, and others were accompanied by malicious and stereotypical images. Another reposted a video lecture defending Adolf Hitler.