Following India’s emphatic victory over England inside two days yet again in Ahmedabad,  Indian cricket board (BCCI) and IPL governing council on Sunday released the full schedule of the much-anticipated Indian Premier League 2021, which will be played between April 9 and May 30 in India.

The season opener will be Royal Challengers Bangalore 14th attempt at winning their maiden title when they face off against defending champions Mumbai Indians in Chennai on April 9 (7:30 pm). Let’s take a detailed look at Virat Kohli and team’s detailed schedule. 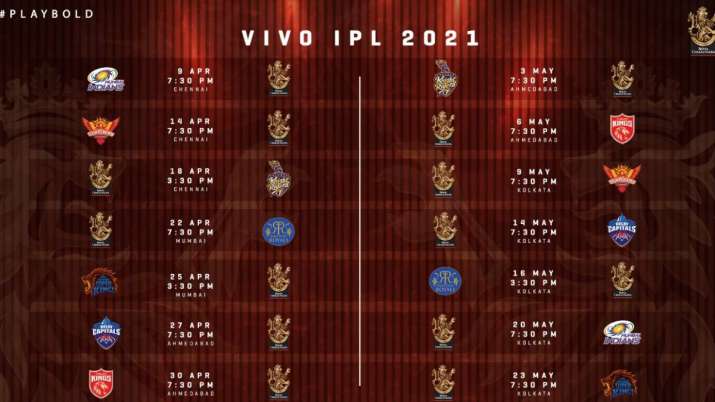 The opener will be the first of three matches that RCB will play in Chennai. Their second game will be against fellow southern outfit Sunrisers Hyderabad on April 14, 7:30 pm, followed by Kolkata Knight Riders in a Sunday afternoon clash (April 18, 3:30pm).

The side will then travel to Mumbai for two matches — Rajasthan Royals (April 22, 7:30 pm) and Chennai Super Kings (April 25, 3:30 pm) before moving to Ahmedabad for the third phase.

In the Gujarat capital, RCB will play four games with the first against Delhi Capitals on April 27, 7:30 pm; followed by Punjab Kings on April 30, 7:30 pm.

RCB finished fourth last season after losing out in the eliminator to Sunrisers Hyderabad. They finished a satisfactory fourth in the points table after seeing off the last-minute challenge from Kolkata Knight Riders.

20,000 national guards with lethal weapons being deployed in Washington DC