Bollywood actress Janhvi Kapoor has quite a few films in the pipeline. The actress is currently in Chandigarh reportedly shooting for her film Good Luck Jerry. Now taking to her Instagram stories Janhvi posted a video from the sets of the film playing cricket. Janhvi is seen playing cricket with her crew members. In the clip, Janhvi is seen dressed as a simple, small-town girl in salwar-kameez paired with a black puffer jacket.

In the Instagram Story video, Janhvi hits a ball with her bat. “Is it safe to say I became a pro,” Janhvi wrote. The actress’ hair is done in plaits in the video. Although she misses hitting the first ball but she soon becomes a pro as she hits long shots. In the video, an excited Janhvi was also seen jumping like a kid as she manages to hit the ball with her bat. 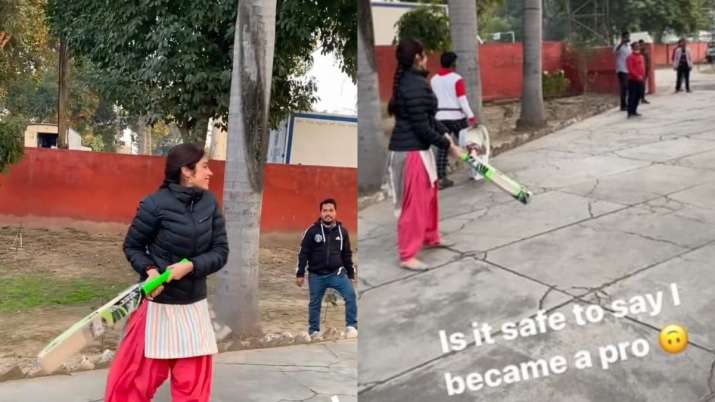 Recently, the shoot of Janhvi-starrer film Good Luck Jerry was disrupted after a group of farmers held a protest in Patiala. The incident took place on Bhupindra Road when protesting farmers opposed the filming of the movie. They even carried forward the protest outside the hotel where Janhvi, movie director Sidharth Sengupta and other staff were staying. Due to safety concerns, the production house has now decided to shift its shooting location to Chandigarh which is about 70 km from Patiala.

On the work front, Janhvi was last seen in the digitally-released film Gunjan Saxena: The Kargil Girl. She will next feature in Good Luck Jerry. The film also stars Deepak Dobriyal, Meeta Vashishth, Neeraj Sood and Sushant Singh. Her other films lined up are Roohi Afzana and Dostana 2.

AEW Double Or Nothing 2022 Results

Ashwiny Iyer Tiwari to make her digital debut with ‘Faadu’