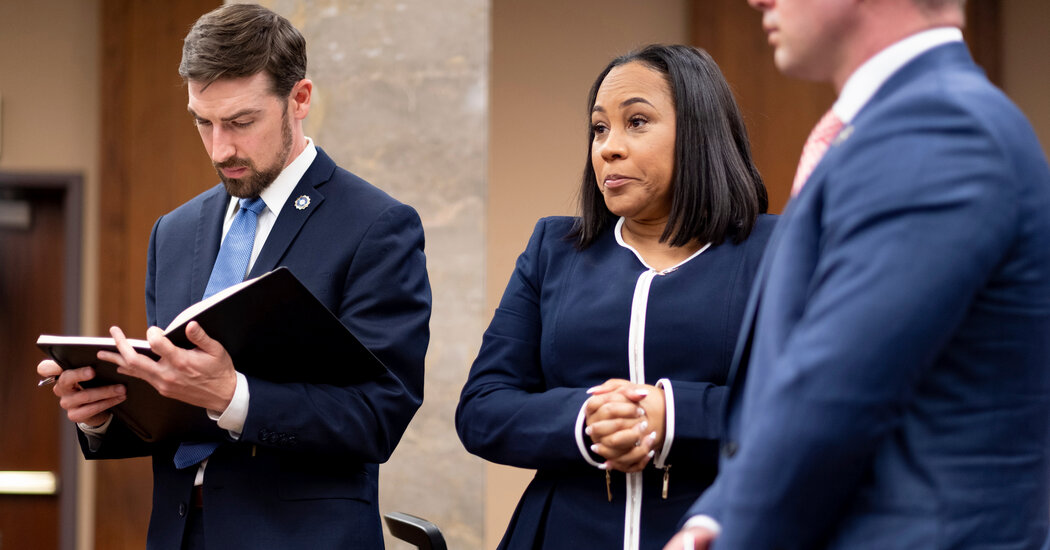 Fani T. Willis, the district attorney in Atlanta, is leading an investigation into election interference by Donald J. Trump. A Republican targeted by her inquiry wants her disqualified.

ATLANTA — A Georgia judge on Thursday criticized the Atlanta prosecutor leading an investigation into election interference by Donald J. Trump and his allies, calling her decision to host a fund-raiser for a political rival of one of the targets of her inquiry a “what-are-you-thinking moment.”

A lawyer for one Trump elector, State Senator Burt Jones, argued that Ms. Willis should be disqualified from the case, or at least from his part of the case, because she hosted a fund-raiser for Charlie Bailey, a Democrat running against Mr. Jones to be Georgia’s next lieutenant governor.

A lawyer representing Ms. Willis’s office, Anna Green Cross, pointed out that the fund-raiser was “very clearly identified” in a flier as pertaining to a runoff election in the Democratic primary, not the general election matchup against Mr. Jones.

But the judge was clearly troubled by it. “The optics are horrific,” he said, adding that it created at least an appearance problem. “If we are at a cocktail party and people are asking, ‘Do you think that this is a fair and balanced approach to things?’” he said, and continued, “Well, how do you explain this?” He also expressed concern that the district attorney, as “the legal adviser to the grand jury,” was “on national media almost nightly talking about this investigation.”

Criticism aside, efforts to remove prosecutors have been tried, unsuccessfully, in other Trump-related cases. Late last year, lawyers for Mr. Trump filed a federal lawsuit seeking to halt an inquiry by the New York attorney general, Letitia James, arguing that her public criticism of Mr. Trump had violated several of his constitutional rights, including those to free speech and due process. That suit was dismissed in May. Judge McBurney told a lawyer for several of the pro-Trump electors, Holly Pierson, “you’re not asking, I hope, that we have to have a Republican district attorney investigate this, because that’s the only way it will be fair?”

Ms. Pierson said she was not.

The legal maneuvers come as Ms. Willis’s investigation has been intensifying and has emerged as the inquiry that puts Mr. Trump and some of his allies in perhaps the most immediate criminal jeopardy.

In recent weeks, Ms. Willis has sought to compel testimony from a number of Mr. Trump’s lawyers and advisers, including Rudolph W. Giuliani, Senator Lindsey Graham and John Eastman. She has also informed at least 17 people connected to the case that they are targets who may be charged. Her office has said that it is weighing a range of charges, including conspiracy and racketeering, and that a special grand jury has been meeting for weeks in Atlanta to hear testimony and review documents and videos that may shed light on the multipronged effort to put Georgia in Mr. Trump’s win column.

Judge McBurney also said on Thursday that if the grand jury’s report was ready near the November election, he would keep it sealed until afterward.

Back to School in DeSantis’s Florida, as Teachers Look Over Their Shoulders

BHU to reopen from February 22 in hybrid mode

US condemns Houthi attack in UAE, promises to stand beside Emirati partners

Firefighters In Frace Battle an ‘Explosive Cocktail’ of Wind and Flame