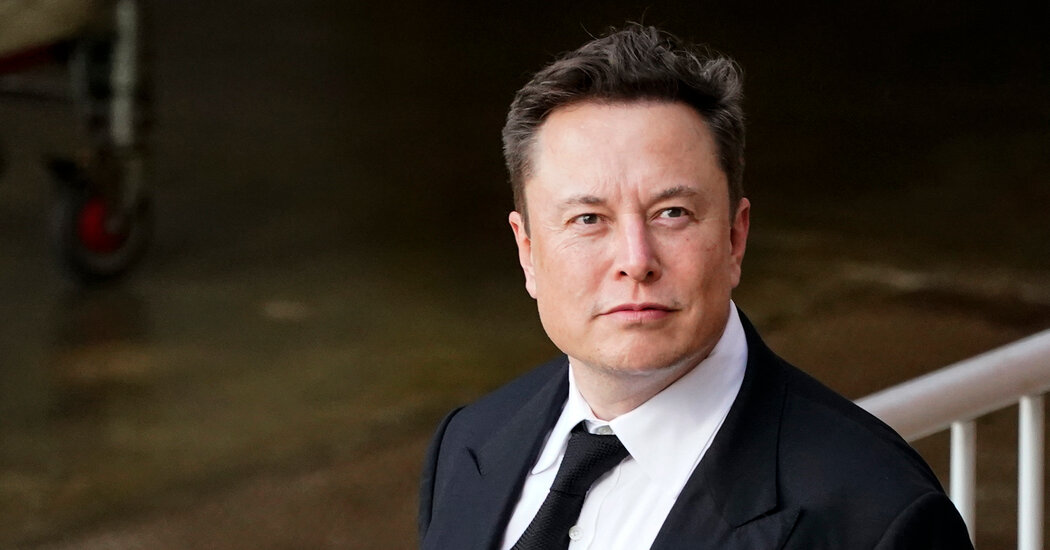 A judge in Delaware gave Mr. Musk until Oct. 28 to complete the deal. The trial, which was set to start in a little more than a week, could still happen in November.

Elon’s Musk’s surprise move to return to the bargaining table with Twitter earlier this week may have merely been the opening salvo in the next stage of the protracted struggle over the future of the company.

On Thursday, Mr. Musk tried to end Twitter’s lawsuit against him, asking a judge to halt a trial that was set to begin in little more than a week and could force him to make good on a deal he made in April to acquire the company for $44 billion.

The judge overseeing the case granted Mr. Musk’s request, postponing the trial and giving the billionaire three weeks to complete his purchase of Twitter.

Mr. Musk argued for patience in a legal filing. He said he was working to arrange financing for the deal, but the process would take several weeks and he could complete it by Oct. 28. If the transaction does not close by then, the judge said, a trial will be scheduled in November.

Twitter had opposed the motion, arguing that Mr. Musk did not appear to be serious about lining up the financing he needs to complete the deal and that the trial should proceed unless Mr. Musk quickly makes good on his latest offer.

Mr. Musk made his request as Twitter board members discussed his latest offer to buy the company on Thursday morning, as negotiations over the sale of Twitter dragged into their third day.

Lawyers for Mr. Musk accused Twitter of bogging down the process by insisting that the lawsuit continue, while Twitter said the attempt to halt the litigation was “an invitation to further mischief and delay.”

A blockbuster deal. In April, Elon Musk made an unsolicited bid worth more than $40 billion for the social network, saying he wanted to make Twitter a private company and allow people to speak more freely on the service.

The response. Twitter’s board countered Mr. Musk’s offer with a defense mechanism known as a “poison pill.” This well-worn corporate tactic makes a company less palatable to a potential acquirer by making it more expensive to buy shares above a certain threshold.

Securing financing. Though his original offer had scant details and was received skeptically by Wall Street, Mr. Musk, the world’s wealthiest man, moved swiftly to secure commitments to finance his bid, putting pressure on Twitter’s board to take his advances seriously.

Striking a deal. With the financing in place, Twitter’s board met with Mr. Musk in April to discuss his offer. The two sides soon reached a deal, with the company agreeing to sell itself for $54.20 a share — roughly $44 billion in total.

Tensions arise. Not long after Mr. Musk and Twitter reached their agreement, problems began. Mr. Musk threatened to pull out of the deal if Twitter did not provide more information on how it calculates the number of fake accounts. In June, the company announced that it planned to give him access to a large swath of its data.

Musk backs out. In July, Mr. Musk announced that he was terminating the deal, citing the continuing disagreement over the number of spam accounts. Twitter then sued the billionaire to force him to go through with the deal. But Mr. Musk fired back in a legal filing, arguing that the company concealed the true number of fake accounts on its platform, accusing Twitter of fraud.

Preparing for trial. Lawyers for both sides have issued more than 100 subpoenas ahead of a trial that was expected to start in October, mostly targeting tech VIPs. In September, a judge ruled that Mr. Musk could amend his suit to include accusations from a former Twitter security chief who claimed that the company misled the public about its security practices.

A surprise move. On Oct. 4, Mr. Musk proposed a deal to acquire Twitter for $44 billion, the price he agreed to pay for the company in April. An agreement at the original price, which would be a victory for Twitter, could bring to an end the acrimonious legal fight. The judge overseeing the case granted Mr. Musk’s request to postpone the trial, giving him three weeks to complete the deal.

“Twitter will not take yes for an answer. Astonishingly, they have insisted on proceeding with this litigation, recklessly putting the deal at risk and gambling with their stockholders’ interests,” lawyers for Mr. Musk wrote in a legal filing. “Proceeding toward trial is not only an enormous waste of party and judicial resources, it will undermine the ability of the parties to close the transaction.”

Twitter had been set to face Mr. Musk in court on Oct. 17 for a trial that could have forced the billionaire to buy the company. But on Monday, Mr. Musk delivered a surprise letter to Twitter declaring he would pay $44 billion for the company, as he agreed to do in April before changing his mind and declaring he would quit the deal.

Mr. Musk’s fresh proposal has left Twitter’s board juggling two high-stakes negotiations: one over the legal battle and the other about a potential agreement to sell the company that would avert the courtroom drama.

Twitter plans to proceed with its litigation against Mr. Musk until a deal is certain, two people with knowledge of the confidential discussions said. The board’s transaction committee, which includes the technology executives Bret Taylor, Martha Lane Fox and Patrick Pichette, has met weekly with legal and financial advisers to manage the deal-making.

Closing such a deal would normally be a mundane event, with the two sides exchanging the legal documents necessary to transfer ownership of a company. But Mr. Musk’s volatile business dealings have made Twitter hesitant to abandon its lawsuit until he takes ownership of the company and his funds are delivered to Twitter shareholders, the people said.

Lawyers for Twitter said in a legal filing that Mr. Musk had refused to commit to a closing date for the transaction. But Mr. Musk’s lawyers argued that clinging to the lawsuit would jeopardize the deal and that the banks who had agreed to fund Mr. Musk’s bid for Twitter were prepared to honor their commitments.

On Thursday, Mr. Musk suggested that he had reluctantly been coaxed to the negotiation table, tweeting a scene from “The Godfather, Part III” that included the line, “Just when I thought I was out, they pull me back in.”

In recent weeks, Mr. Musk proposed buying Twitter at a significant discount of as much as 30 percent. Discussions later narrowed to around 10 percent, people familiar with those conversations said.

“Twitter offered Mr. Musk billions off the transaction price. Mr. Musk refused because Twitter attempted to put certain self-serving conditions on the deal,” Mr. Spiro said, without adding more details. A Twitter spokesman declined respond to a request for comment on his claim.

On Monday, after those conversations had fizzled, Mr. Musk informed the company that he was ready to proceed with the original price he offered in April.

Despite Mr. Musk’s motion to stop it, Twitter’s lawsuit against him may continue, legal experts said.

Debt financing has remained a focal point in negotiations. If Mr. Musk’s debt financing falls through, he can pay a $1 billion breakup fee to Twitter and walk away from the acquisition.

A group of lenders, led by Morgan Stanley, Bank of America and Barclays, has committed to providing $12.5 billion to Mr. Musk’s bid. The banks are on the hook for that debt through next year. Fully prepared debt commitment letters from those banks are required to finalize the deal.

Investment banks typically sell the debt they arrange for such loans to reduce their risks in case borrowers cannot repay what is owed, a process that takes months. Doing so now might be painful for the banks, since economic uncertainty has dented investors’ interest and forced banks to sell such loans at a loss.

A corporate representative for one of the banks testified on Thursday that Mr. Musk had not communicated to the bank that he plans to close the transaction, Twitter said in a legal filing. The filing did not identify the banking official or indicate where they testified. Twitter has accused Mr. Musk in its lawsuit of not making reasonable efforts to secure the debt financing for the deal, which would put him in breach of their contract.

The remaining funds for the $44 billion deal are set to come from Mr. Musk’s personal wealth and equity investors. Mr. Musk has sold about $15.5 billion in Tesla stock to amass the cash needed to buy Twitter.

In the spring, he said he had raised $7.1 billion from equity investors, including the top venture capital firms Andreessen Horowitz and Sequoia Capital, and his personal confidants, including the tech mogul Larry Ellison.

It is unclear whether the terms of their agreement with Mr. Musk allow them to back out given the changed circumstances. Representatives of Andreessen Horowitz and Oracle, the company that Mr. Ellison leads, did not respond to requests for comment.

A spokeswoman for Binance, the cryptocurrency exchange that committed $500 million, said nothing had changed about the company’s plans to participate in the deal.

The deal-making continues under the shadow of Twitter’s lawsuit, which is set for an Oct. 17 trial. If the company cannot reach an agreement with Mr. Musk before then, it is set for an incendiary showdown in the Delaware Court of Chancery, which specializes in managing deal disputes and could order Mr. Musk to buy Twitter. If it proceeds, the trial could feature testimony from Mr. Musk and top Twitter executives.

A deposition scheduled for Thursday with the billionaire was canceled as negotiations continued, two people familiar with the matter said. It has been rescheduled for Monday, a person with knowledge of the plans said.

“Trial is fast approaching,” Kathaleen McCormick, the judge overseeing the litigation, wrote in a letter on Thursday to lawyers for Twitter and Mr. Musk. The letter urged the legal teams to quickly resolve their disputes over discovery and prepare for the trial.

Zoom to Lay Off 1,300 Workers, Joining Other Tech Giants

The People Onscreen Are Fake. The Disinformation Is Real.

Racing to Catch Up With ChatGPT, Google Plans Release of Its Own Chatbot

How to Get Rid of Author’s Block