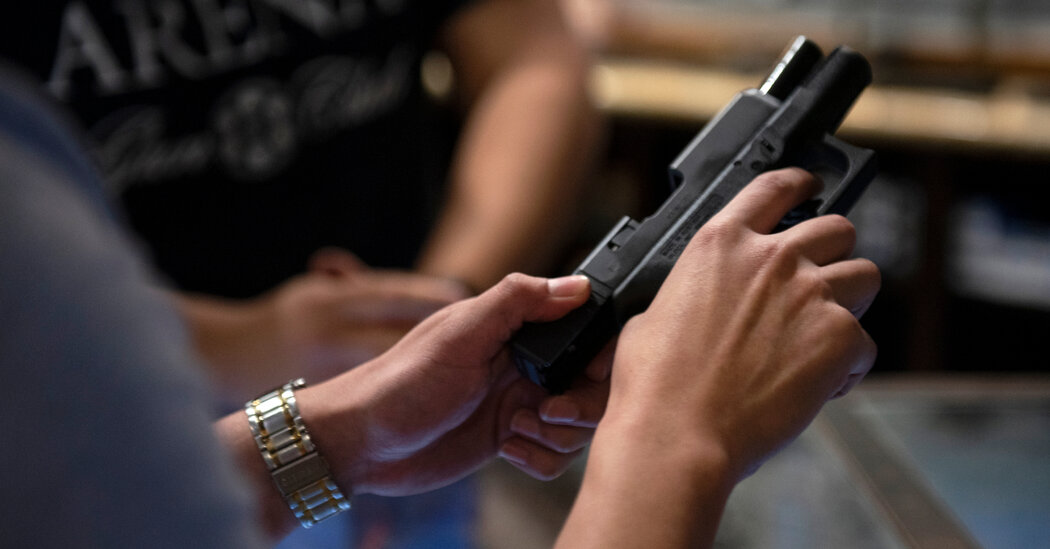 The federal judge ruled that the Second Amendment, “as informed by Founding-era history and tradition,” did not exclude 18- to 20-year-olds from the right to carry handguns.

A federal judge in Fort Worth struck down a Texas law on Thursday that prohibits adults under 21 from carrying handguns, on the grounds that the restriction violated the Second Amendment.

A lawsuit brought against the state in November 2021 by two adult plaintiffs under 21 and the Firearms Policy Coalition, a gun-rights advocacy nonprofit, challenged the constitutionality of the statute. The lawsuit argued that “18- to 20-year-old adults were fully protected by the Second Amendment at the time of its ratification.”

In his ruling, U.S. District Judge Mark T. Pittman of the Northern District of Texas wrote that the Second Amendment, “as informed by Founding-era history and tradition,” did not exclude 18- to 20-year-olds from the right to bear arms.

Judge Pittman, who was nominated by President Donald J. Trump in 2019, ordered the injunction stayed for 30 days, pending appeal, meaning that it would not immediately go into effect.

His ruling and a statement by the Firearms Policy Coalition were couched in the language of originalism, the theory that the Constitution and other texts must be interpreted the same they would have been at the time they were written. That interpretation is favored by the Supreme Court’s conservative majority and groups like the powerful Federalist Society. Judge Pittman is a former vice president and founding member of the Fort Worth chapter of the group.

“This decision is a significant victory for the rights of young adults in Texas and demonstrates for the rest of the nation that similar bans cannot withstand constitutional challenges grounded in history,” Cody J. Wisniewski, a senior attorney for constitutional litigation at the Firearms Policy Coalition, said in a statement, noting that many people ages 17 to 20 fought in the American Revolution. He added: “Texas cannot point to a single Founding-era law that prohibited 18- to 20-year-olds from carrying a functional firearm for self-defense.”

Texas gun laws have grown less restrictive in recent years, even as the state reels from mass shootings, including in Uvalde, where an 18-year-old gunman killed 19 children and two teachers in May. Months before the Firearms Policy Coalition filed its lawsuit in 2021, Gov. Greg Abbott signed a law that ended the requirement for Texans to obtain a license to carry a handgun.

David Pucino, deputy chief counsel for the Giffords Law Center to Prevent Gun Violence, said that the judge’s decision was “squarely at odds” with precedent established by the Fifth Circuit Court of Appeals, which has jurisdiction over the Federal District Court in Fort Worth.

“Going back all the way to 2013, the Fifth Circuit precedent has said that you can prohibit both the purchasing of handguns and the carrying of handguns for people of the age of 18 to 21,” he said.

Mr. Pucino also noted that “young people are responsible for an outsize share of gun violence” and disproportionately likely to be the victims of it.

As of June, six of the nine deadliest mass shootings in the United States since 2018 were carried out by people who were 21 or younger, reflecting a demographic shift in mass shootings. Before 2000, men in their mid-20s, 30s and 40s were more likely to engage in mass shootings.

“This is yet another example of a radical court operating wildly out of step with the American people and the Constitution,” Shannon Watts, founder of the gun-control organization Moms Demand Action, said in a statement. “After hearing Uvalde survivors demanding common-sense gun safety measures — including raising the age to buy an assault weapon — a Trump-appointed judge in Texas just issued a dangerous ruling that would allow teenagers to carry handguns in public.”

Mr. Wisniewski, of the Firearms Policy Coalition, said the group was committed to pressing its aggressive view of gun rights.

“We look forward to restoring the right to keep and bear arms throughout the United States in the coming months and years,” he said.