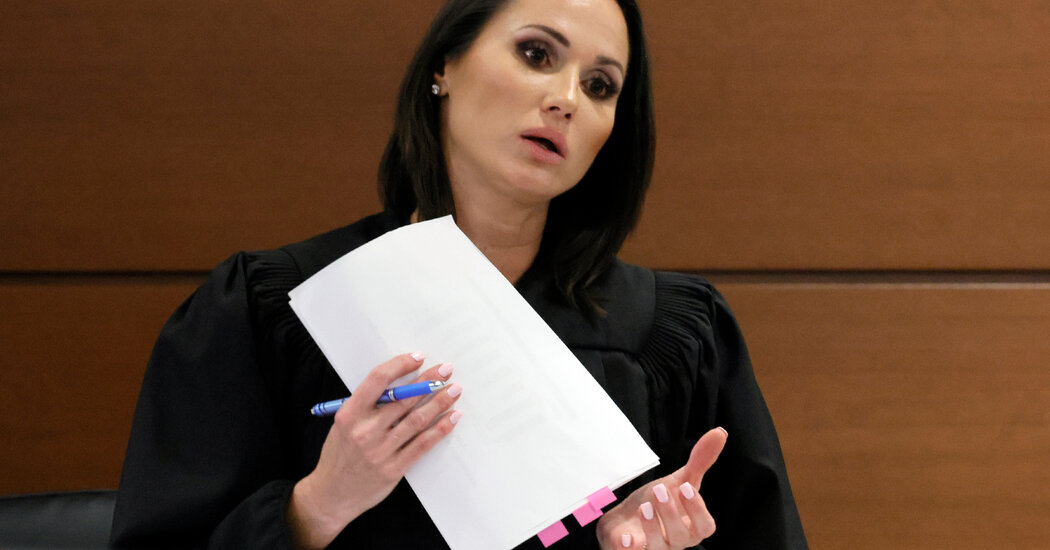 A juror says he and others tried to persuade those who wanted to spare the gunman’s life by making them look again at the evidence of his rampage, including the weapon he used to kill 17 people.

MIAMI — Deliberations had all but collapsed on Wednesday when Andrew Johnson, one of the 12 jurors in the sentencing trial of the gunman in the Parkland, Fla., mass shooting, tried a surprising, last-ditch move to provoke conversation: He asked for sheriff’s deputies to bring into the jury room the semiautomatic rifle that had been used to murder 17 students and faculty members at Marjory Stoneman Douglas High School.

Mr. Johnson and eight other jurors thought that the gunman, Nikolas Cruz, should be sentenced to death for his rampage. But three jurors leaned toward a sentence of life in prison. So Mr. Johnson and others pulled evidence out of boxes, Mr. Johnson said — at one point even replaying graphic videos of the Feb. 14, 2018, attack — to persuade the jurors who favored life.

They failed. On Thursday, the jury of seven men and five women said that Mr. Cruz, 24, should spend the rest of his life in prison without the possibility of parole, a sentence that shocked and outraged victims’ families and immediately raised questions about what had transpired inside the jury room during the seven or so hours of deliberations.

Most of the jurors wanted a different outcome, Mr. Johnson emphasized in an interview on Friday, in which he offered a view into the sensitive deliberations. But Florida law requires death sentence recommendations to be unanimous. He said he tried not to look anyone in the eye when the jury walked into the courtroom to deliver its decision.

“I didn’t want to see any lawyers or anyone,” he said, “just out of disappointment.”

He felt let down not only by the sentence but also by how it was reached, he said — without the sort of open dialogue and cooperation that he had hoped for, especially in such a significant case. “We never deliberated correctly,” he lamented.

The jury’s actions have become the source of much speculation among legal observers and the public in South Florida, where Mr. Cruz’s trial was closely followed and where many expected a death sentence. A motion addressing an alleged threat made by one juror in the jury room led to a court hearing on Friday, though the issue was not one that could overturn the life sentence.

Judge Elizabeth A. Scherer told lawyers on Friday that hours before that complaint had been made to prosecutors, another juror, Jimmie Benbow, had tried to get her attention before and after the verdict was read. He had asked for a complaint form, which she thought might have been for something innocuous like the courthouse parking. However, that request, according to Mr. Johnson, was to address some jurors’ feelings that they had not meaningfully deliberated about the gunman’s fate. Reached by phone on Friday, Mr. Benbow declined to comment.

The deliberations had started out well enough, said Mr. Johnson, 39, a computer technician for Miami International Airport. An initial vote showed that some jurors favored a death sentence, others life and perhaps four were undecided, he said. Then, they engaged in what he described as a productive conversation about how to weigh the aggravating factors presented by prosecutors to justify the death penalty and the mitigating circumstances presented by defense lawyers to show the gunman’s troubled life. His biological mother drank heavily while pregnant with him, and his adoptive mother became overwhelmed by his developmental delays and, at times, violent behavior, the gunman’s lawyers said.

But soon, one juror firmly declared that she could not sentence someone she considered to be mentally ill to death, Mr. Johnson said. Benjamin Thomas, the jury foreman, gave a similar account to a local television station on Thursday.

“When you know that one person says, ‘This is going to be my choice, and I’m not going to change it,’ and that one choice means we’re done, that basically kills the morale,” Mr. Johnson said on Friday.

By Wednesday afternoon, jurors knew they were at an entrenched 9-3 split. Mr. Johnson made a calculated move: He asked for the gun to be brought in.

“We said, ‘OK, let’s not turn this in so early, even though one person basically affects the whole thing,’” Mr. Johnson said of the jury’s recommendation. “‘We’re going to the hotel to sleep on it. Maybe there’ll be in the morning the kind of collaborative work and communication that we had at the beginning of the day.’”

The panel, which was sequestered at an undisclosed location without access to electronics, had dinner at an Italian restaurant. He felt anxious and slept fitfully.

“Not knowing how the next day was going to play out was not easy,” he said.

The gun awaited jurors in the jury room on Thursday morning. But it did not change any minds. The panel had reached a decision. Tension mounted, Mr. Johnson said.

“You had a lot of tears, a lot of frustration on everyone’s face,” he said. “It became very silent.”

As they filed into the jury box of the packed and hushed courtroom, Mr. Johnson saw Mr. Benbow try to get the judge’s attention. Once seated, Mr. Benbow and another juror hunched over in their chairs, clutching their faces in their hands. Several other jurors cried.

After the verdicts were read, Judge Scherer polled the jurors, asking them one by one: “Is this your verdict?” One woman hesitated for a long time before tearfully replying, “Yes.”

Mr. Johnson had to be asked twice. He seriously considered an answer that could have upended the verdict.

“I was going to say no,” he said. But three people had favored life, and the decision was not up to a simple majority. “That’s a huge flaw” in the law, Mr. Johnson added.

Back in the jury room, as sheriff’s deputies returned the jurors’ confiscated cellphones, Mr. Johnson noticed that the woman who had most strongly opposed a death sentence had written a note to the judge. That note, filed later in the public court docket, was from a juror named Denise Cunha, who said she had been “fair and unbiased” despite accusations from fellow jurors that she had made up her mind before the trial began. Ms. Cunha did not respond to multiple requests for comment on Friday.

By Friday morning, another juror had filed a complaint to prosecutors about the alleged threat. The prosecutors’ motion did not name the juror accused of making the threat or the complainant.

“I do respect the decision of everyone’s vote, including the ones that made the life vote,” Mr. Johnson said. “But at the same time, I would have preferred more cooperation, more involvement.”

“I’m not happy with the result,” he added.