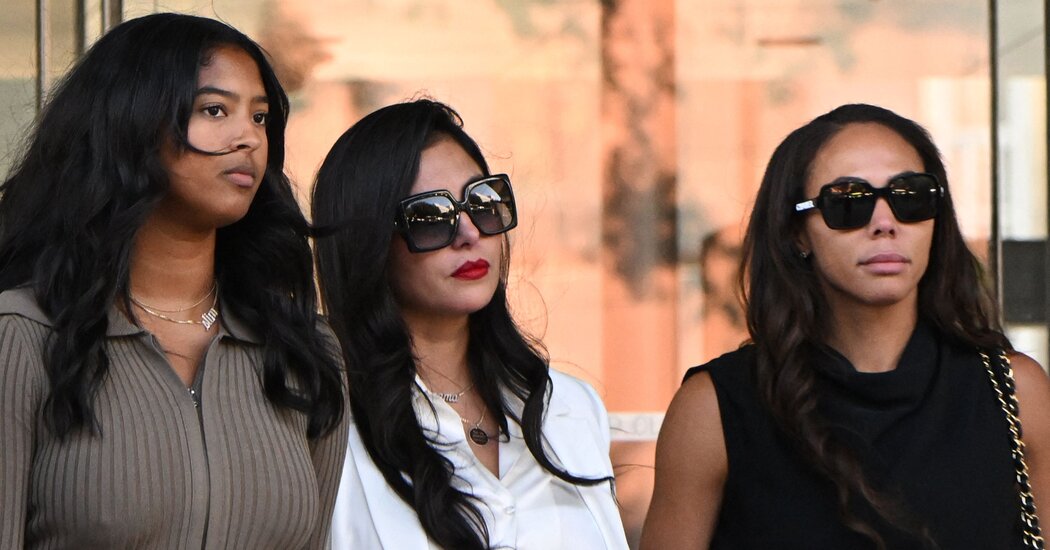 Ms. Bryant had sued Los Angeles County over the sharing of photos of human remains from the helicopter crash that killed her husband, her daughter and seven others. Another plaintiff was awarded $15 million.

LOS ANGELES — A jury awarded Vanessa Bryant $16 million on Wednesday in her lawsuit against Los Angeles County over the inappropriate sharing of photos of human remains from the helicopter crash that killed her husband, Kobe Bryant, and her daughter, Gianna, along with seven others.

Chris Chester, whose wife Sarah, 45, and daughter, Payton, 13 were among those killed in the crash and who joined the suit, was awarded $15 million.

Ms. Bryant, who wore a face mask in court, clasped her hands around her head and began to weep as the verdict was read.

Jerry Jackson, Mr. Chester’s lawyer, said he and the plaintiffs were grateful to the jury and Judge John F. Walter, “who gave us a very fair trial.”

Ms. Bryant and her lawyers declined to comment after the verdict was read on Wednesday afternoon.

Mira Hashmall, the lead attorney for the county in the case, said in a statement that she and other members of the county’s legal team disagreed with the verdict.

“We will be discussing next steps with our client,” she said. “Meanwhile, we hope the Bryant and Chester families continue to heal from their tragic loss.”

Mr. Bryant, a star for the Los Angeles Lakers, achieved a stature in Southern California that far transcended basketball. On Wednesday, about 14 blocks from the courthouse, a new mural celebrating his legacy was unveiled to mark “Mamba Day,” referring to Mr. Bryant’s nickname.

On a foggy Sunday morning in January 2020, Mr. Bryant, 41, and eight others were flying from Orange County to a youth basketball tournament in a suburb north of Los Angeles when the pilot became disoriented in the clouds. The helicopter crashed into a hill near Calabasas, Calif., and everyone on board was killed.

As news of the crash and the identity of the victims rippled around the world, law enforcement officials, investigators, journalists and fans of Mr. Bryant headed toward the rugged crash scene.

In those first hours after the crash, Ms. Bryant alleged in her lawsuit, Los Angeles County firefighters and sheriff’s deputies were allowed to take unnecessary close-up photos of human remains around the site, including the bodies of Kobe and Gianna Bryant, and the photos were then shared among sheriff’s deputies and firefighters.

Ms. Bryant testified in court that a few days after the emotional public memorial for her husband of almost two decades, she was told about a Los Angeles Times report that one of the deputies, Joey Cruz, had shown photos to a bartender and another bar patron, who filed a complaint with the Sheriff’s Department.

“I felt like I wanted to run down the block and just scream,” Ms. Bryant testified. “But I couldn’t escape. I can’t escape my body.”

Another woman, a relative of some of the crash victims, testified that a Fire Department official showed some of the photos at a gala where communications staff were receiving an award. She later complained to the Fire Department.

In the suit, Ms. Bryant accused the county of negligence and of violating her constitutional right to privacy. Her lawyers argued that orders from Fire Department and Sheriff’s Department officials to delete the images after inquiries were begun amounted to the destruction of evidence and an attempted cover-up.

Ms. Bryant and Mr. Chester sought damages for emotional distress brought on by worrying that the photos could surface publicly on the internet at any time.

Lawyers for the county acknowledged that the photos were taken and were shared, but they argued that the effort to delete them was thorough enough to keep the photos from appearing for the last two and a half years, and therefore the photos had not been publicly disseminated. The photos were not introduced as evidence in the trial.

“To claim privacy and then put all these details in public — it defies logic,” Ms. Hashmall said.

The county’s lawyers argued that although some county policies were violated, the plaintiffs’ constitutional rights were not. And they said that police officers, firefighters and other emergency responders need the flexibility to document accident scenes before federal investigators or coroner’s officials arrive, so the taking of the photographs was justified.

The trial was in some ways a typical Los Angeles celebrity legal spectacle. Ms. Bryant arrived each day at the gleaming, cube-shaped federal courthouse in downtown Los Angeles in a black sport utility vehicle and walked briskly past photographers as she entered and left the building.

Rob Pelinka, the general manager of the Los Angeles Lakers, testified in the trial, and several of Ms. Bryant’s friends, including the professional soccer player Sydney Leroux and the singer Ciara, appeared in the gallery to support her.

The suit was an effort to hold officials to account for behavior that lawyers for Ms. Bryant and Mr. Chester argued had “shocked the conscience.”

Throughout the trial, the plaintiffs’ lawyers portrayed sheriff’s deputies and firefighters as motivated by a kind of macabre voyeurism that they said was embedded in the agencies’ culture.

They played video of Sheriff Alex Villanueva talking about how, “since the invention of the Polaroid,” law enforcement officers have been creating so-called death books, documenting the bodies they’d seen in the course of their work.

The agencies had no explicit policies in force that would bar officers from making images of human remains, so the practice was allowed to continue essentially unchecked until citizens spoke up.

The agencies’ internal efforts to investigate what had happened in the Bryant case were sloppy and incomplete, the plaintiffs’ lawyers argued.

Mr. Villanueva, who took the witness stand just after Ms. Bryant, testified that he had offered “amnesty” to deputies for coming forward with the images and then deleting them.

In closing arguments, Craig Lavoie, who represented Ms. Bryant, showed the jury a flow chart of how the photos had spread. There were question marks on the chart for people who, according to witness testimony or official reports, had received the images but whose electronic devices were never searched.

“If I asked all nine of you to give a percentage chance these photos would end up online, I’d get nine different answers,” Mr. Lavoie told the jury. “But none of them would be zero. And when it’s your husband, your child, you don’t get the luxury of cold percentages.”

Jerry Jackson, Mr. Chester’s lawyer, asked the jury to consider awarding a total of as much as $75 million to the plaintiffs — $2.5 million each for past suffering, plus about $1 million for each year of their remaining life expectancy — a formula that would add up to $30 million for Mr. Chester and $40 million for Ms. Bryant.

“Ladies and gentlemen, you can’t award too much for what they’ve been through,” Mr. Jackson told the jury.

He asked the jury to divide the burden of paying the damages evenly between the Sheriff’s and Fire Departments; both are funded by Los Angeles County taxpayers.

In their closing arguments, lawyers for the county said that ultimately, the case was about photographs that almost no one had seen.

“This is a photographs case but there are no photographs,” Ms. Hashmall said.

The jury disagreed, finding that the failure of both agencies to train employees about the right to privacy amounted to a constitutional violation. They also found that the Sheriff’s Department’s practice of taking and sharing photos of human remains violated Ms. Bryant’s and Mr. Chester’s constitutional rights.

They deliberated for less than five hours.