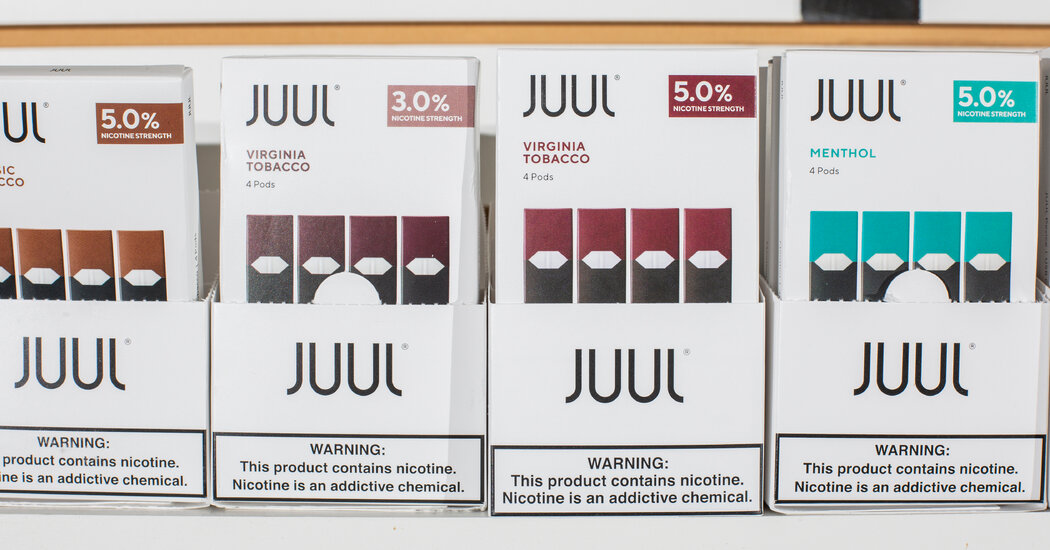 The tentative deal would close an investigation by nearly three dozen states into the company’s marketing and sales practices.

Juul Labs, fighting for its survival in the United States, on Tuesday tentatively agreed to pay $438.5 million to settle an investigation by nearly three dozen states over marketing and sales practices that they contend set off the nation’s teenage vaping crisis.

The company said that it did not acknowledge any wrongdoing in the settlement, but that it was trying to “resolve issues from the past” while awaiting a decision by the Food and Drug Administration over whether it would be permitted to continue to sell its products. Juul has been trying to reposition itself as a seller of vaping products that could help adults quit smoking traditional cigarettes, in an effort to rehabilitate its tarnished reputation and improve its diminished market value.

The tentative settlement prohibits the company from marketing to youth, funding education in schools and misrepresenting the level of nicotine in its products. But Juul had already discontinued several marketing practices and withdrawn many of its flavored pods that appealed to teenagers, under public pressure from lawmakers, parents and health experts a few years ago when the vaping crisis was at a peak.

“We think that this will go a long way in stemming the flow of youth vaping,” William Tong, Connecticut’s attorney general, said at a news conference on Tuesday. “We are under no illusions and cannot claim that it will stop youth vaping. It continues to be an epidemic. It continues to be a huge problem. But we have essentially taken a big chunk out of what was once a market leader.”

The multistate investigation found that the company appealed to young people by hiring young models, using social media to court teenagers and giving out free samples, he said. And, he added, the inquiry revealed that the company had a “porous” age verification system for its products and that 45 percent of its Twitter followers were ages 13 to 17.

Jason Miyares, the attorney general for Virginia, pointed out in a statement that the company’s former strategy of selling flavors like mango and crème brûlée appealed to youth as did the sleek design of its device that was easy to conceal. One term of the settlement banned the company from depicting anyone under 35 in its marketing images, Mr. Miyares’ statement said.

Juul said on Tuesday that the settlement agreement was “aligned with our current business practices which we started to implement after our companywide reset in the fall of 2019.”

“We remain focused on the future as we work to fulfill our mission to transition adult smokers away from cigarettes — the No. 1 cause of preventable death — while combating underage use,” the company statement said.

The agreement does not resolve all of the company’s legal battles. While Juul had previously reached settlements in lawsuits brought by attorneys general from North Carolina, Washington, Louisiana and Arizona, nine similar cases remain. Major lawsuits filed by New York and California are among those still pending. And about 3,600 lawsuits by individuals, school districts and local governments, have been consolidated in an action that is still wending its way through a California court.

Juul is still selling tobacco and menthol-flavored pods and vaping products while its application for permanent sales is under review by the F.D.A. The agency originally denied the company’s request in June, saying Juul had not provided sufficient proof that its products would benefit public health and citing “insufficient and conflicting” data from the company.

Juul received a temporary reprieve in court. It has since argued that it helped two million adult smokers quit traditional cigarettes, and it took exception to the agency’s conclusions about chemicals in its products. The F.D.A. then relented on its denial, announcing that it would perform an additional review of “scientific issues” in the application.

States will vary in the ways they use the settlement funds, which are to be paid over six to 10 years. A spokeswoman for the Connecticut attorney general’s office said its share (more than $16 million) would go toward vaping and nicotine cessation and addiction treatment. Texas estimated it would receive nearly $43 million and Virginia listed its share as $16.6 million.

Meredith Berkman, who co-founded Parents Against Vaping E-Cigarettes, said she was gratified to learn of the settlement. She got involved in the group after Juul sent a representative into her ninth-grade son’s high school to speak at an assembly in 2018. Her son relayed that the representative had described the product as “totally safe,” a conversation Ms. Berkman recounted during a congressional hearing in 2019.

Since then, she said the group had heard from hundreds of families who contended that their teenagers had become addicted to vaping Juul and other nicotine and marijuana devices. Some young people became gravely ill from vaping and others had to go to drug rehabilitation to kick the nicotine habit.

“It was Juul who came on the scene and opened this terrible Pandora’s box,” Ms. Berkman said. “No amount of money can erase the harm caused by Juul’s targeting of and marketing to teens whose use of the company’s stealth-by-design flavored products led many kids to suffer severe nicotine addiction and physical harm.”

E-cigarette use among teenagers appears to have fallen in recent years, though the coronavirus pandemic had thrown new dynamics at the leading monitor of youth tobacco use, a survey conducted in schools by the Centers for Disease Control and Prevention. In March, that survey showed that nearly 8 percent, or about two million students, reported using e-cigarettes within the past 30 days.

While Juul was once the youth favorite, the survey showed that the candy- and fruit-flavored Puff Bar vapes were most liked by youth, with Juul coming in fourth among students. Data from IRI, a marketing research company, suggested that the brand attracted more adult customers by competing closely with another brand, Vuse vapes, for the market leader position, with about 30 percent of recent sales.

Altria, which in December 2018 bought a 35 percent stake in Juul for $12.8 billion, said in a recent filing to investors that the company’s share was now valued at about $450 million — nearly the same amount that Juul just agreed to pay to settle the investigations by nearly three dozen states and Puerto Rico.

After drawing major scrutiny for its cachet with adolescents, Juul lost considerable market share and value when it buckled to public pressure and stopped selling the flavors that appealed most to young people.

Although the vaping market is still a small share of the overall sales of cigarettes and other inhaled products, the F.D.A. has repeatedly fallen short in its efforts to rein in youth-friendly e-cigarettes that continue to pop up in new candy colors and flavors. After the agency attempted to crack down on existing brands, companies and the market pivoted to synthetic nicotine in an attempt to evade regulation.

In March, Congress gave the F.D.A. the authority to take synthetic nicotine off the market. But the agency is moving methodically, sifting through about a million applications it received from non-tobacco nicotine product makers in the spring. To a degree, it has to proceed carefully to ensure that its rulings stand up in court.

The agency is also continuing to review and approve some marketing authorization applications submitted years ago for leading vapes that tend to be sold in service stations and convenience stores. But it recently said that it did not expect to finish the review of the applications already submitted before next year.