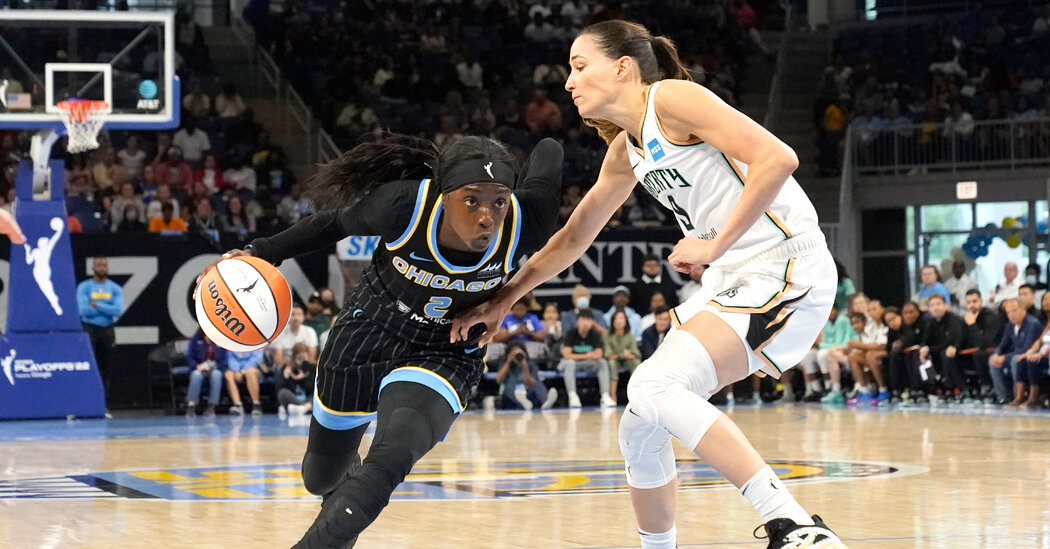 The Liberty stunned Chicago in Game 1, then the Sky returned the favor with a record-setting win in Game 2.

One thing was evident early in the Game 2 playoff matchup between the Chicago Sky and the Liberty: If the Sky were going to lose their first-round series, it would not be because of Kahleah Copper.

Copper looked eager to get the game going before tipoff on Saturday, bouncing up and down on the court, clapping her hands and energetically talking with teammates. After the ball was tipped, she blew by Liberty defenders for tough layups, yelled after the finishes and took on the challenge of guarding Sabrina Ionescu, the Liberty’s All-Star guard.

Copper finished with 10 points in the first quarter, matching the Liberty’s total score and propelling Chicago to a 21-point lead that all but ended the game. The Liberty never recovered from Copper’s first-quarter barrage and the Sky won, 100-62, to tie the best-of-three series at one game apiece. Game 3 is on Tuesday at Barclays Center.

“I definitely approached this game with a chip on my shoulder,” Copper said. “We lost at home in front of our crowd who shows up consistently and gives us everything, so it was important for us to respond.”

Sky Coach James Wade said the Game 1 loss woke the team up, inspiring them to play Saturday’s game with an intensity that matched how the team had approached games throughout the season. Guard Courtney Vandersloot echoed Wade’s sentiments and said that they came into the game with a “different mentality.”

Copper ignited the crowd in the first quarter after she connected on a corner 3-pointer in front of the Sky bench, turned, and ran down the floor with three fingers raised. She gave Wade a high five as she passed him. The Liberty called timeout.

The Sky’s 38-point win set a W.N.B.A. record for the largest margin of victory in playoff history. (The Sky held the previous record, with a 36-point victory in Game 3 of last year’s finals against the Phoenix Mercury.)

“I expected this from Chicago, but I didn’t think it would be such a butt-kicking,” Liberty Coach Sandy Brondello said. She added that she was disappointed with the way the Liberty let Copper and other players “drive right by them,” along with their poor decision-making and 19 turnovers.

“We’re not built like them,” she said. “We don’t have a Copper that can drive by anyone. Our one-on-one defense has to be better.”

The Sky won their first W.N.B.A. championship in 2021 largely because of Copper’s fearless playing style and her ability to elevate her game — and that of her teammates — in the biggest moments. After the Sky lost Game 2 of the finals last season, Copper outscored the Mercury’s starting five in the first half of Game 3. She was named the most valuable player of the finals.

So, with the Sky on the brink of elimination on Saturday, Copper performed how her teammates and Wade expected her to. And Wade made point of calling out a recent ESPN ranking that listed Copper as the 17th best player in the playoffs. “I know she’s probably the 17th best player in the playoffs right now, but you know, we’ll take that 17,” Wade deadpanned.

Copper’s scores came from a variety of acrobatic layups in which she twisted and turned in the air before finishing. She has become known for her superb touch around the basket, which Vandersloot said is somewhat unfortunate because Copper’s stellar finishes have become expected.

“She has such a unique ability to finish through contact, and through multiple players, and she makes it look easy and what she’s doing is not easy,” Vandersloot said. “But you know, she’s kind of our engine, and when she’s doing that, we’re special.”

Copper’s crucial performance came a day after the Sky looked like they might have to play without her. She left the Sky’s Friday practice early after an unspecified injury. Wade dismissed questions about the injury and told reporters before the game on Saturday that she was “fine.” Copper looked healthy as she led all scorers with 20 points, and nagged the Liberty — especially Ionescu — all over the court, earning three steals. Wade said Copper’s ability to play both ends of the floor is what makes her special, and that her defense is an undervalued part of her game.

“Her ability to be disruptive and then, on the other end, get us a bucket and actually draw the defense in, it sets a tone,” Wade said. “And the tone is what we need, and she was able to do that tonight, and she does that most nights for us.”

Michaela Onyenwere said Chicago “exploited” them in multiple ways, mainly with their toughness. That was the most disappointing aspect of the loss because the Liberty expected the Sky to play that way but “faltered to the pressure,” she said.

“I think just looking at ourselves first, I think, is the first thing we start with,” she said. “Continue to play together and continue to know that this is our season that’s on the line. So you know, I believe wholeheartedly that we will respond better than we did today.”

The loss for the seventh-seeded Liberty came after they stunned the No. 2-seeded Sky in Chicago in the first game of the series on Wednesday. In that game, the Liberty held Chicago scoreless for the final 3 minutes 31 seconds and went on a 13-0 run, winning 98-91. But on Saturday they did not look like the team that accomplished that feat; Brondello said it was because “we went away from what we wanted to accomplish here and playing together as a team.”

She added: “But it’s nice to know we have, you know, we have one more game, and hopefully, we can bring a better effort and hopefully the result will be positive.”

PM Modi to speak in Rajya Sabha on February 8