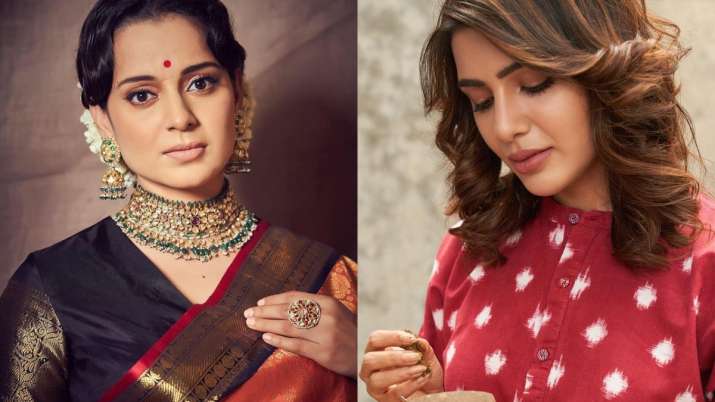 Bollywood actress Kangana Ranaut lauded South superstar Samantha Akkineni for launching the first song Chali Chali from her upcoming film Thalaivi in three languages– Hindi, Tamil and Telugu. The actress called her an epitome of women empowerment. She tweeted, “Thank you my dear @Samanthaprabhu2 for being so gracious… You are epitome of woman empowerment, we need to empower each other and that’s real feminism. Thank you.”

Samantha Akkineni was quick to respond to the words of praise by Kangana Ranaut and tweeted, “Queen.”

Kangana plays late Tamil Nadu chief minister J. Jayalalithaa in the film and on Friday, she released the first song Chali Chali. The director of the film revealed that the actress rehearsed for a month for the song. “Jayalalithaa ji’s persona on screen was alluring and it was a great responsibility to recreate the same in ‘Thalaivi’. However, given the strong screen presence of our very own four-time National Award winner Kangana ji, she worked really hard and rehearsed the song almost for a month to get utmost perfection and the shoot unfolded quite smoothly,” he said.

The song recreates the commencement of Jayalalithaa’s cinematic journey before she entered politics. The director says that a lot of research was done to make sure that the song is perfect.

“Jayalalithaa ji was the ruling superstar of Tamil cinema, one of the earliest reigning queens of romance and a legend who is still loved and respected dearly. We did extensive research to understand the looks and feels of the films of Jayalalithaa ji and accordingly attempted to replicate the same on screen,” he added.

Thalaivi is slated to release in Hindi, Tamil and Telugu on April 23.