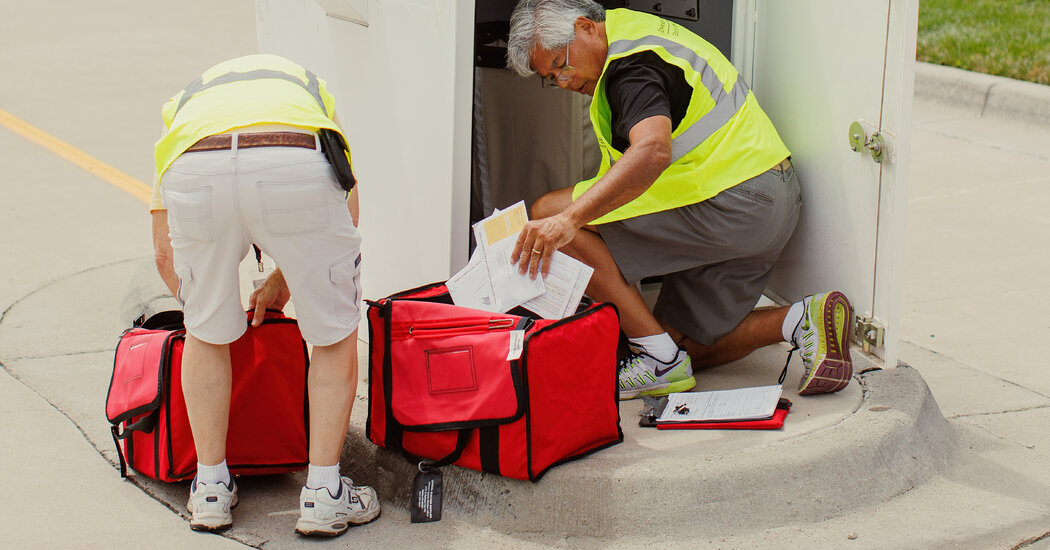 On Tuesday, Kansans will decide whether to pass a constitutional amendment that could lead to far-reaching abortion restrictions or an outright ban on the procedure.

OLATHE, Kan. — In the final days before Kansans decide whether to remove abortion rights protections from their State Constitution, the politically competitive Kansas City suburbs have become hotbeds of activism.

In neighborhoods where yard signs often tout high school sports teams, dueling abortion-related messages now also dot front lawns. A cafe known for its chocolates and cheese pie has become a haven for abortion rights advocates and a source of ire for opponents. Signs have been stolen, a Catholic church was vandalized earlier this month and tension is palpable on the cusp of the first major vote on the abortion issue since Roe v. Wade was overturned in June.

“I’m really sad that that happened,” said Leslie Schmitz, 54, of Olathe, speaking of the abortion access landscape. “And mad. Sad and mad.”

There may be no greater motivator in modern American politics than anger. And for months, Republican voters enraged by the Biden administration have been explosively energized about this year’s elections. Democrats, meanwhile, have confronted erosion with their base and significant challenges with independent voters.

But interviews with more than 40 voters in populous Johnson County, Kan., this week show that after the fall of Roe, Republicans no longer have a monopoly on fury — especially in states where abortion rights are clearly on the ballot and particularly in the battleground suburbs.

“I feel pretty strongly about this,” said Chris Price, 46, a political independent who said he voted for Mitt Romney for president in 2012 before backing Democrats when Donald J. Trump was on the ballot. “The candidates that would support an abortion ban, I would not be supporting at all. Period.”

Asked if threats to abortion rights had affected how motivated she felt about engaging in the midterm elections this fall, Natalie Roberts-Wilner, a Democrat from Merriam, Kan., added, “Yes. Yes. Yes. Definitely.”

On Tuesday, Kansans will vote on a constitutional amendment that, if it passes, could give the Republican-dominated Legislature the ability to push new abortion restrictions or to outlaw the procedure entirely. Nearby states including Missouri — which is separated from some competitive Kansas suburbs by State Line Road, a thoroughfare dotted with abortion-related yard signs — have already enacted near-total bans.

The vote is open to unaffiliated Kansans as well as partisans. And whatever the outcome, activists on both sides caution against drawing sweeping national conclusions from an August ballot question, given complex crosscurrents at play.

The amendment language itself has been criticized as confusing, and in an overwhelmingly Republican state, Democrats and unaffiliated voters are less accustomed to voting on Primary Day. On the other hand, a few voters said they would vote no on the amendment but could back Republicans in November — a sign that some who support abortion rights still weigh other political issues more heavily in elections. And nationally, a Washington Post-Schar School poll released on Friday found that Republicans and abortion opponents were more likely to vote in November.

But there is no question that the abortion debate in the state’s most populous county — located in the Third District of Kansas, one of the nation’s most competitive congressional seats — offers the first significant national test of how the issue is resonating in suburban swing territory.

Like other highly educated, moderate areas — from suburban Philadelphia to Orange County, Calif. — the Third District is home to a substantial number of center-right voters who, like Mr. Price, were comfortable with Mr. Romney in 2012. But they embraced Democrats in the 2018 midterms, including Gov. Laura Kelly and Representative Sharice Davids, and many have recoiled from Mr. Trump.

Whether those voters remain in the Democratic fold this year, with Mr. Trump out of office, has been an open question in American politics. Democrats are betting that outrage over far-reaching abortion restrictions will help the party hang onto at least some of those moderates, despite the extraordinary political headwinds they face.

Republicans insist that anger around inflation — and fear of a recession — will crowd out other concerns for a broad swath of voters. (In polls, far more Americans cite inflation or the economy as the biggest problem facing the country than they do abortion.)

The Tuesday vote will offer an early snapshot of attitudes and energy around abortion, if not a definitive predictor of how those voters will behave in the fall.

“How much of a motivator is it really?” said Dan Sena, a Democratic strategist who guided the House takeover in 2018, of abortion rights, adding that there had recently been signs of improvement for Democrats in some suburban districts. “How does it actually, when it’s by itself, move women, move portions of the electorate? And this will really give us insight and the opportunity to get an answer to that.”

“It appears that the ‘Yes’ vote still has the lead, but that has narrowed,” said Mike Kuckelman, the chairman of the Kansas Republican Party. Citing the Dobbs v. Jackson Women’s Health Organization decision that handed control over abortion rights to the states, he continued, “A lot of that is because, I think, the Dobbs decision has incited the pro-choice forces to come out.”

The Kansas City Star reported on Thursday that there had been an increase, so far, of about 246 percent in early in-person votes compared with during the 2018 midterm primary elections. Several voting stations in both moderate and more conservative parts of Johnson County this week were bustling all day, including in a rainstorm and in the baking heat. And on Friday, Scott Schwab, the Republican secretary of state, predicted that around 36 percent of Kansas voters would participate in the 2022 primary election, slightly up from the primary in 2020.

His office said that the constitutional amendment “has increased voter interest in the election.”

“I’ve talked to many people that said, ‘I’ve not previously been involved but going to vote,’” Mr. Kuckelman said.

Other Republicans said that the abortion amendment and overturning of Roe did not affect their commitment to voting in other races this year — that they have long been highly engaged.

“No more energized,” said John Morrill, 58, of Overland Park, who supports the amendment. “I was already very energized.”

At the Olathe site, which drew more conservative voters on Thursday, Melissa Moore said she was voting for the amendment because of her deeply held beliefs opposing abortion.

“I understand women saying, ‘I need to control my own body,’ but once you have another body in there, that’s their body,” Ms. Moore said. But asked how the intense national focus on abortion affected how she thought about voting, she replied, “I tend to always be energized.”

A few others at the early-voting site in Olathe indicated that they were voting against the amendment and were inclined to back Democrats this fall. But they spoke in hushed tones and declined to give full names, citing concerns about professional backlash, in an illustration of how fraught the environment has become.

Closer to the Missouri border, patrons at André’s, an upscale Swiss cafe, felt freer to openly express their opposition to the amendment. The restaurant and shop stoked controversy earlier this summer when employees wore “Vote No” stickers or buttons and encouraged patrons to vote, but several lunchtime visitors made clear that they shared those views.

“We just want to make sure people have rights to make choices,” said Silvana Botero, 45, who said that she and a group of about 20 friends were all voting no and that she felt more enthusiastic about voting in November, too.

At a voting site nearby, Shelly Schneider, a 66-year-old Republican, was more politically conflicted. Ms. Schneider opposed the amendment but planned to back some Republicans in November. Still, she was open to Ms. Kelly, the Democratic governor, especially if the amendment succeeded. Approval of the amendment, she acknowledged, could open the way for potentially far-reaching action from the Legislature.

“I think Laura Kelly is kind of a hedge against anything that might pass,” she said. “She might provide some common sense there.”

Aaj Ki Baat LIVE | How voters were beaten up by hoodlums in Bengal,...

By-elections in MP between nationalism and anti-nationals: Uma Bharti