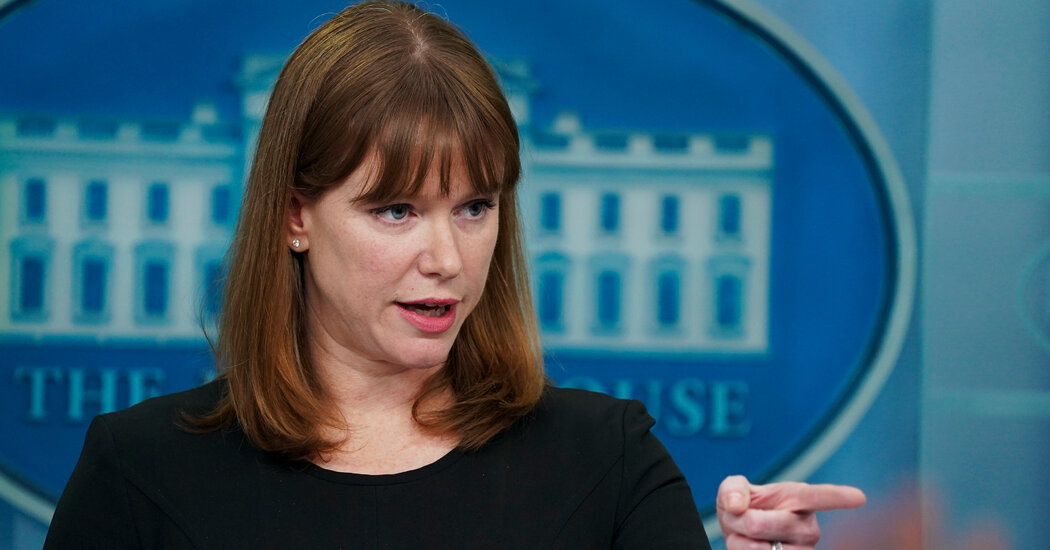 Kate Bedingfield, who announced this month that she was stepping down, abruptly changed her mind and said on Friday that she had decided to remain at the White House.

WASHINGTON — At this point in an administration, with the president’s poll numbers in the tank and a daunting midterm election on the horizon, the usual staff news around the White House is a roster of who is leaving. But in an unusual twist, the news on Friday was who is not leaving after all.

After announcing in early July that she would step down, Kate Bedingfield, the White House communications director and an adviser to President Biden for years, abruptly changed her mind. She had been nursing second thoughts after her original decision, colleagues said, and Mr. Biden and Ron Klain, the chief of staff, asked her to reconsider.

“After much thought, discussion and reflection, I’ve decided to stay,” Ms. Bedingfield told colleagues in an email on Friday. “I’m not done here and there is so much more good work to do with all of you. I couldn’t be happier and more excited about this awesome — if admittedly last-minute! — development. The work is too important and too energizing and I have a lot of gas left in the tank.”

Ms. Bedingfield’s about-face, which was reported earlier by CNN, came as turnover in the West Wing has picked up, although it is still nowhere comparable to the revolving door of President Donald J. Trump’s administration.

Mr. Klain wanted anyone planning to leave to do so by the end of July to have a stable staff heading into the campaign season.

It has been a time of mixed news for the president. His approval rating is dismal, and the latest data showed that the economy had shrunk for the second quarter in a row, a possible indicator of a recession. But a flurry of action on Capitol Hill has advanced his priorities on climate change, health care, same-sex marriage and industrial policy, possibly the start of a winning streak that had long eluded him.

Ms. Bedingfield has been a key counselor to Mr. Biden since his second term as vice president. During his presidential campaign, she was one of the architects of the message of national restoration that carried him through the primaries and the general election. But some Democrats have complained that the president’s messaging has not been focused, forceful, sustained or commanding enough since he took office.

Still, one message from the president’s communicator was welcomed in the West Wing on Friday. “I’m excited that this isn’t me sending you all a sappy ‘this is my last day’ note,” Ms. Bedingfield wrote in her email, “and so excited for all that is to come.”

Retail inflation rises to 5.03% in February