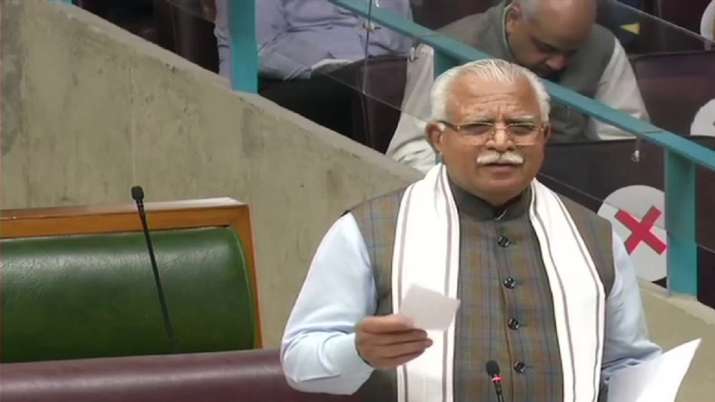 No confidence motion against Haryana government-led by Manohar Lal Khattar defeated in the Legislative Assembly by 55-32. The no-confidence motion was moved by the Congress party. The Bharatiya Janata Party has 40 MLAs in the 90-member Haryana Assembly. The party also has the support of 10 MLAs of Dushyant Chautala’s Jannayak Janata Party (JJP) and five independent legislators. The opposition Congress has 31 members in the Assembly.

During a debate in the Haryana assembly, Chief Minister Manohar Lal Khattar said, “No Confidence is Congress’ culture. When the party loses polls, there’s no confidence on EVMs, for surgical strikes, it asked for evidence. ‘Alochana for sake of alochana nahi karni chahiye’. If Congress is in power, all is well, but if it’s BJP, then not.”

“Mistrust culture’ is an old Congress tradition. Though this mistrust can be seen within the party, with PC Chacko leaving the party (today). Sometimes it’s G-23 or mistrust between Surjewala or Hooda sahab in the State,” Khattar said while lashing out at the Congress.

READ more...  Amid Opposition ruckus, Tomar says 'ready to discuss farmers issues inside and outside Parliament'

ALSO READ | Big setback for Congress ahead of polls in Kerala, PC Chacko resigns from party

In less than one-and-a-half-year Manohar Lal Khattar-led BJP-JJP coalition government was put on test on the issue of three Central farm laws when Congress moved a no-confidence motion in the Assembly.

Moving the motion, Leader of the Opposition Bhupinder Singh Hooda demanded inclusion of 250 farmers killed during the farmers’ agitation in the obituary references of the Assembly.

Describing the government a minority, Hooda said that in the 2019 Assembly elections the BJP failed to get the majority. The BJP formed the government with the support of the JJP (Jannayak Janta Party), which sought votes against the BJP.

Describing Chief Minister Khattar “Nero”, Hooda said, “The Chief Minister is behaving like Nero when Rome was burning. The same thing is happening in Haryana.”

“The situation was bad to the extent that Khattar could not go to Panipat to unfurl tricolour on Republic Day and instead went to neighbouring Panchkula to escape farmers’ wrath,” Hooda said. He demanded secret voting on the no-confidence motion, which was rejected by Speaker Gian Chand Gupta.

Earlier, a confident Khattar told the media before the House assembled that he was confident that the no-confidence motion against the government would be defeated.

Political observers said that the no-trust motion is a calculated move to embarrass the JJP, the crucial post-electoral coalition partner with the BJP-led government, which is supporting the saffron party despite claiming to be an outfit of a rural Jat-centric party with the farmers as its core vote bank.

The JJP has also been facing criticism within the party too for not walking out of the alliance on the issue of farmers and ‘clinging to power’. In an alliance, the JJP had extended support to the BJP, which won 40 seats in the Assembly polls in 2019, six short of the majority mark.

In a video message, he said, “Residents of the state should protest in front of the residences of legislators, who have been supporting the state government. They should warn the leaders that they would face social and political boycott if they continued to support the laws.”

The current strength of the 90-member Assembly is 88 members with the resignation of INLD’s Abhay Chautala and disqualification of Congress’ Pradeep Chaudhary after he was sentenced to three-year imprisonment.

(With inputs from IANS)