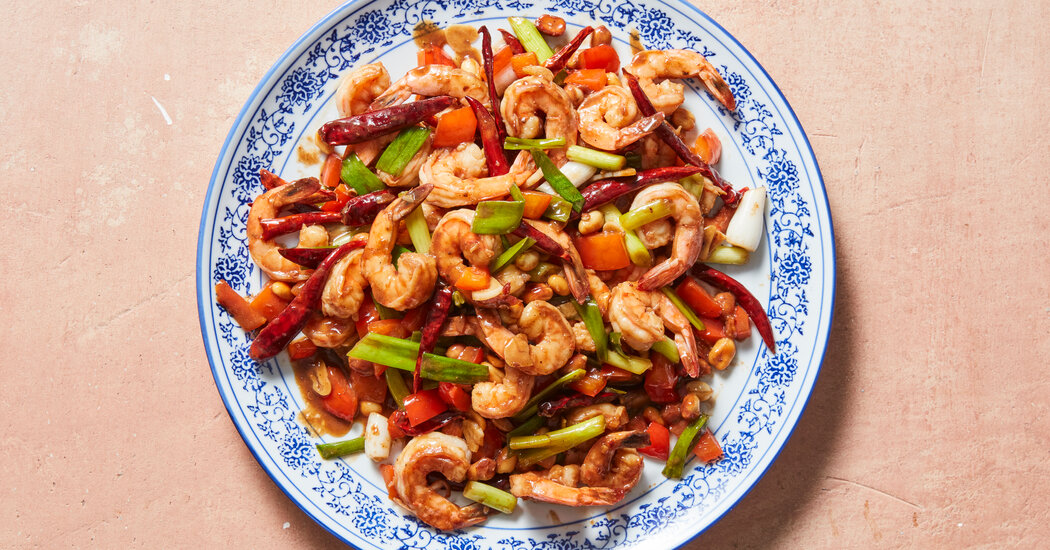 Chiles and a sweetened soy-vinegar sauce define the dish, but you can make it a million ways at home.

A steaming plate of kung pao anything feels like the part of a fireworks show when small, bright bursts pop without deafening booms. Surprising but not jolting, it’s a dish filled with beats of excitement: You don’t know when they’re coming, but they’re always welcome.

With kung pao, that likable little thrill comes from the sauce’s flashes of chile heat in a glossy swirl of salty, sour and sweet that coats stir-fried chicken, shrimp, tofu, vegetables and, often, peppers and nuts. Every bite swings a little spicy or chewy, tangy or crisp. And there are endless variations, so the total number of possible kung pao experiences is something like infinity.

The dish’s defining elements are chiles and a sweetened soy-vinegar sauce, but most everything else is up for grabs, as it has been from the start. That makes it a meal you can cook night after night at home, where you can calibrate the seasonings to your liking and end up with something that tastes both new and familiar. (It also doesn’t hurt that it takes less than 20 minutes from start to finish.)

The origins of kung pao — transliterated today as “gong bao” — are murky, but the original source of the name is undisputed. It stems from a late-19th-century governor-general of Sichuan and gong bao (“palace guardian”), who is said to have loved this dish. In exploring the dish’s history, Fuchsia Dunlop, the British food writer who has expertly covered Chinese cuisine in English, notes that it may have been created in Sichuan, Guizhou or Shandong, with each province laying claim to it. But she notes, too, that there are countless versions from region to region, and even from cook to cook.

Knowing that there is no single way to make the dish, while simultaneously learning more about it, freed me from the fear of not preparing it “authentically.” I’m Chinese American and was raised on the food and in the culture, but Ms. Dunlop studied professional cooking in regions of China I’ve never even visited. Learning from the well-researched recipes in her cookbooks helped me return to how I long cooked Chinese dishes — by scent, sound, taste and practical needs — and gave me the confidence to create my own versions of beloved meals.

The first time I prepared kung pao chicken, I followed a recipe handwritten by my Taiwanese-American friend Grace Han, who transcribed instructions from her mother, Pearl Han. Grace and I grew up together as neighbors, and our parents still live next to each other, on lots close enough that I could always smell what Auntie Pearl was cooking. And it smelled so good, the tingle of chiles, the urgency of garlic, the warmth of ginger as soft and bright as the Southern California sun setting behind our homes.

With the perspective of adulthood, I couldn’t understand how she pulled together those meals after long days of working and watching us, but, when I saw Grace’s notes, I understood. Auntie Pearl pared down recipes, including this one for kung pao chicken, to its essentials for those busy nights — and it’s exactly right when dinner needs to get on the table as quickly as possible.

This kung pao shrimp may have more ingredients, but it doesn’t take much longer. The sea saltiness and snap of the shrimp sharpen against a confetti of sweet bell pepper. Peanuts, fried to bring out a toasty earthiness, deliver crunch among the slips of garlic and scallions. Dried chiles lace the dish with heat and are great on their own, but throwing in floral, citrusy Sichuan pepper adds the welcome tingly sensation known as ma la. Once you try the dish with it, you can decide whether you want more or less, as you should with all of the ingredients, to make — and enjoy — the kung pao you’re craving.