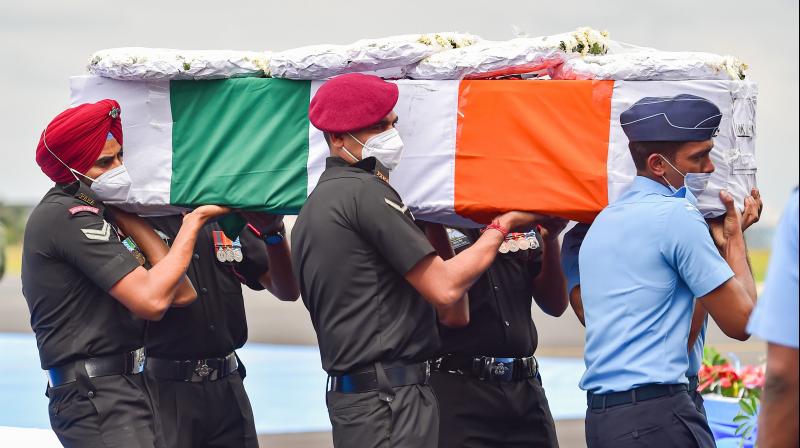 Chittoor: Lance Naik B Sai Teja, who lost his life in a helicopter crash in addition to CDS General Bipin Rawat and 11 others in Tamil Nadu, was put to rest in his native village Yeguvaregadi in Chittoor district on Sunday afternoon.

Teja’s more youthful bro Chaitanya, who is likewise an Army jawan, carried out the last rites as hundreds of villagers chanted Jai Jawan and Bharat Mata ki Jai and bid a tearful goodbye.

Army authorities solemnly presented the national tricolour to Teja’s widow as the mortal remains were buried in his agricultural land with complete military honours and a gun salute.

The mortal remains of the Lance Naik were given his town in a flower-bedecked military automobile from the Army Base Hospital in Bengaluru on Sunday early morning.

Thousands of youths and other citizens, carrying the nationwide flag, lined up along the 30-km path from the Andhra-Karnataka border as the convoy proceeded to Yeguvaregadi.

Tragic scenes were experienced at the jawan’s residence as his body was brought in. The member of the family, buddies and villagers broke down throughout the funeral.

Apart from the Army officials, the AP federal government officials too admired the left soldier.

Hundreds of individuals from neighboring villages put in to pay their last respects.

Was in phone for two straight hours with Xi Jinping: Joe Biden