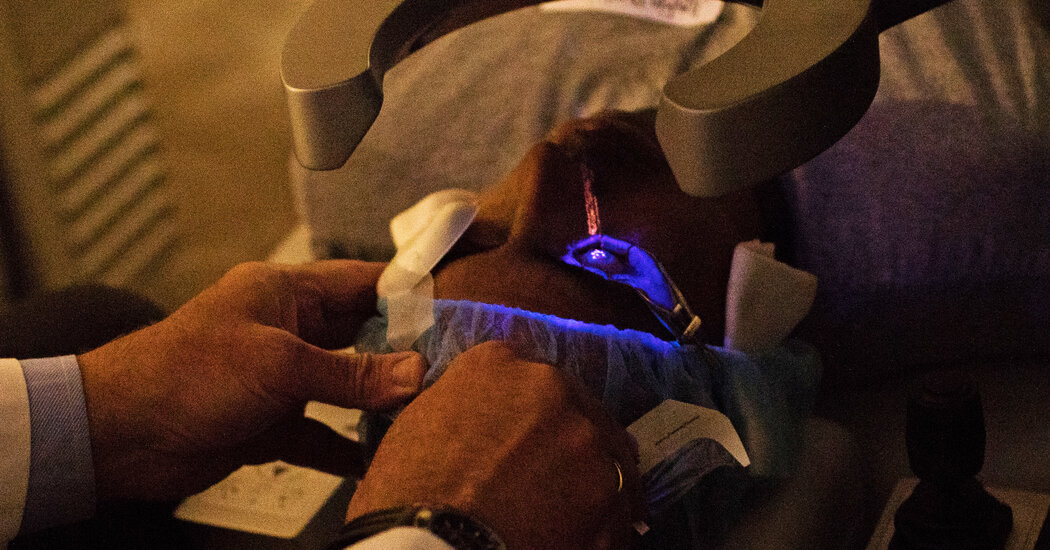 Draft recommendations by the agency describe dry eyes, visual disturbances and other side effects of the procedure. Surgeons say the benefits are being ignored.

Patients considering Lasik surgery should be warned that they may be left with double vision, dry eyes, difficulty driving at night and, in rare cases, persistent eye pain, according to draft guidance by the Food and Drug Administration. After surgery, patients may still need eyeglasses, the document warns.

If put into effect, the agency’s warnings are likely to come as a surprise to many Americans, who view the procedure as safe and commonplace. Every year, more than half a million adults undergo Lasik surgery to correct poor vision.

The operation involves reshaping the cornea, the clear round dome that covers the front of the eye and focuses light on the retina at the back of the eye. The surgeon cuts a thin flap in the cornea and folds it back, and then uses the laser to sculpt the cornea. Afterward, the surgeon replaces the flap.

The operation normally takes less than 15 minutes per eye, and patients usually must pay thousands of dollars out of pocket, since the procedure is not covered by insurance and is considered cosmetic. Lasik surgeons, who point to surveys showing that 90 to 95 percent of customers are satisfied, often promote the procedure by offering free consultations and steep discounts.

The F.D.A. document is not final. More than 600 individuals and professional groups have weighed in with comments since the draft of the guidance was made public in July, and the agency is now reviewing the input while preparing the final documents, officials said.

Organizations representing surgeons and medical device manufacturers have gone on the offensive, accusing the F.D.A. of meddling in the practice of medicine and saying the information is one-sided and will needlessly frighten patients.

Many ophthalmologists say Lasik is the safest procedure done on the eye and that serious, long-lasting complications are rare.

“All we’re asking for is balance,” said Dr. Vance Thompson, incoming vice president of the American Society of Cataract and Refractive Surgery. “This document mainly emphasizes the dangers and complications of Lasik, with no mention of the advantages, and the tone is negative enough that it will scare patients.”

He noted that over 90 percent of patients in the F.D.A.’s own studies expressed satisfaction with the results because they “are achieving good vision without spectacles, which is the goal of most patients.”

But according to the F.D.A.’s draft guidance, a few Lasik patients have become severely depressed, even considering suicide, after experiencing complications from the surgery. Certain chronic conditions, like diabetes, and some medications may put patients at risk for poor outcomes, the document says.

The F.D.A. guidance has been in the making for over a decade. The document states briefly that the surgery is done to reduce dependency on eyeglasses, but most of the 29-page draft guidance is about the risks.

While surgeons and device manufacturers are calling for the draft to be withdrawn in its entirety, critics of the procedure say the focus on risks is appropriate, since the procedure is performed on healthy eyes, not to treat an illness.

“I’ve been waiting 14 years for this to happen,” said Paula Cofer, a Florida woman who testified before the F.D.A. in 2008 and in 2018 that Lasik surgery ruined her eyesight and left her with chronic pain.

The new warnings would provide critical information for consumers, she added: “Right now, even if patients do research on the internet and see warnings, they think it’s just one or two unhappy people. Now they see it’s the F.D.A. saying this.”

The F.D.A. is proposing a patient “decision checklist” that describes Lasik surgery, noting that corneal tissue is “vaporized” and that corneal nerves “may not fully recover” from the incisions, “resulting in dry eyes and/or chronic pain.”

Even after healing, the draft says, the cornea will never be as strong as it was before the surgery.

In comments to the agency, some patients said they had life-altering complications and vision loss, while others raved about their results.

The professional organization representing optometrists, who perform vision tests and prescribe eyeglasses and contact lenses, praised the draft and recommended adding even more precautions about Lasik surgery for pregnant patients and those with irregular astigmatism.

The Medical Device Manufacturers Association, on the other hand, accused the F.D.A. of overstepping its authority and “impermissibly regulating the practice of medicine.”

In an emailed statement, agency officials dismissed the criticism, noting that the F.D.A. routinely issued labeling guidance to ensure that both providers and patients understand the benefits and risks of medical devices.

In 2018, the agency restricted the sale of a permanent contraceptive implant called Essure to doctors who would review a list of safety concerns with prospective patients. (The device was removed from the market shortly afterward.)

The agency’s draft draws on the 2017 findings of a study on patients’ outcomes with Lasik, a collaboration between the F.D.A. and the National Eye Institute and the Department of Defense. It assessed visual symptoms before and after Lasik. The F.D.A. also performed its own meta-analysis of peer-reviewed studies published between 2013 and 2018.

The first study found that three months after Lasik surgery, nearly half of patients who had no visual symptoms before the procedure had developed a new visual aberration for the first time, most commonly halos, which are starburst shapes around lights. Close to one-third reported dry eyes at three months.

The study’s authors wrote that “patients undergoing Lasik surgery should be adequately counseled about the possibility of developing new visual symptoms after surgery before undergoing this elective procedure.” Still, more than 90 percent of patients said they were satisfied with the outcome.

The agency has conducted its own analysis, finding that six months after surgery, 27 percent of patients experienced dry eyes and 2 percent had difficulties that prevented them from engaging in their usual daily activities.

Five years after surgery, according to the F.D.A., 17 percent of patients still relied on eye drops, 2 percent continued to experience visual disturbances and 8 percent still had difficulty driving at night.

F.D.A. officials said they did not know when the guidance would be finalized. Critics of Lasik are concerned that many patients will not have a chance to see the warnings because the agency is not making a review mandatory before surgery.

The guidance and checklist “should be provided by manufacturers and given to physicians and patients before a procedure” and used to “enhance” the physician-patient discussion of risks and benefits.

But reviewing the information with patients is only a recommendation, agency officials acknowledged. That’s problematic, said Diana Zuckerman, who heads the National Center for Health Research, a nonprofit think tank that analyzes research on medical and other consumer products.

“The question is, ‘Are they actually doing anything that will make a meaningful difference to patients?’” she said. “And I don’t think they are.”

Dr. Zuckerman is concerned that patients will see the checklist for the first time when they come in for their scheduled procedures, after they have already decided to get Lasik surgery “or after they’ve already put down a nonrefundable deposit.”

“We think they should review the checklist before they give a deposit, and at least a week before the scheduled procedure,” Dr. Zuckerman said.

Her Foot Looked Normal. What Was Causing the Excruciating Pain?

Her Foot Looked Normal. What Was Causing the Excruciating Pain?

Good news! Junk your old car and get 5% rebate from automakers on new...