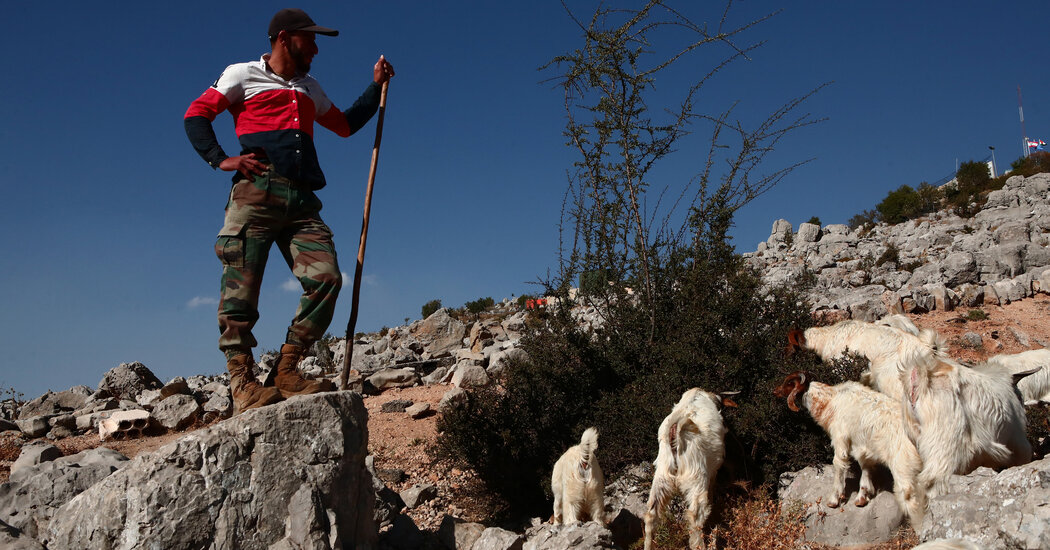 Lebanese herders say that Israel crosses an ill-defined frontier to abduct and interrogate them. Israel accuses the herders of espionage on behalf of Hezbollah.

SHEBAA, Lebanon — It was nearing the end of Hassan Zahra’s workday, herding goats on a mountaintop along Lebanon’s southeastern border, when he was ambushed by a group of Israeli soldiers, he said.

Mr. Zahra, 23, said that last year he was handcuffed, blindfolded and taken to an interrogation facility in Israel, where he was accused of spying for the Lebanese militant group Hezbollah. Hundreds of his goats were left behind on the hillside.

“They said, ‘You shepherds, you make it seem like you are just herding but you work for Hezbollah and you watch us,’” Mr. Zahra said. “We just tend our goats, but they don’t believe us.”

Although the warring states of Lebanon and Israel have just negotiated a maritime border, the situation remains tense along their land frontier, which is still in dispute and lined with minefields and barbed-wire fencing, and surveilled by drones.

Caught in the middle are the men who herd sheep and goats in southern Lebanon adjacent to the agricultural region called Shebaa Farms, which is claimed by Lebanon but occupied by Israel, where it is known as Mount Dov.

The shepherds say they are repeatedly abducted by Israeli troops, accused of feeding information about the army and its movements in the area to Hezbollah. But when they are released, they are often then hauled in for questioning by the Lebanese authorities, who apparently fear that they may have been recruited as spies for the other side. Both the herders and Hezbollah deny the Israeli charges of espionage.

When Israel ended its occupation of southern Lebanon in 2000, it withdrew to what is called the Blue Line, a demarcation set by the United Nations for the purpose of confirming the Israeli withdrawal. But the formal border was never resolved. And Israel did not withdraw from Shebaa Farms, saying that the area was part of the Golan Heights that it took from Syria in 1967, a position backed by a United Nations assessment.

Mr. Zahra says that his family still has land in Shebaa Farms and that previous generations raised livestock there.

The area has long been a tinderbox between Israel and Lebanon; Hezbollah has said that it will not give up its weapons, despite U.N. resolutions calling for the disarmament of all Lebanese militias, as long as part of what it views as Lebanon is occupied.

More than 10,000 U.N. peacekeepers patrol the 75-mile Blue Line but that has not prevented conflict from breaking out or herders like Mr. Zahra from being taken by Israeli troops in the areas along the porous border.

Andrea Tenenti, spokesman for the United Nations Interim Force in Lebanon, acknowledged the difficulties. “Because the line is not well defined, it is hard to tell if the shepherds cross into Israel or if Israelis are crossing into Lebanon,” he said.

Mr. Tenenti said that the Israeli forces call herders like Mr. Zahra “operational shepherds.” The Israeli military says the herders use a phone app that deletes photographs of personnel and vehicles once they are sent back to their Hezbollah handlers.

Sometimes, the herders are dispatched along the border with women and children “so as to conceal their real purpose and to make them appear to be innocent,” the Israeli Army said in a video released by an Israeli news website last year.

The video notes that the army “has been monitoring this trend and has proactively chosen to expose it publicly as part of the battle of wits with the other side.”

Mr. Zahra said that he was inside Lebanese territory in January last year when he came upon about a dozen Israeli soldiers, who surrounded him, rifles pointed at him. He was held for three days in Israel, he added, guarded around the clock by armed soldiers and interrogated multiple times.

The Israeli Army, responding to questions from The New York Times, said that Mr. Zahra had “infiltrated” Israeli territory and that his interrogation had yielded valuable information.

Mr. Zahra’s detention last year was the second time he had been taken by Israeli soldiers, he added. He said that the first time, when he was 14, he and his older brother Ismail had been held for hours. Israeli interrogators demanded to know who was sending them to the area, he recalled.

The U.N. peacekeepers oversee the return of herders and livestock through the only operating border checkpoint in the area. It was there that Mr. Zahra crossed back into Lebanon after he was released by the Israeli forces.

Lebanese intelligence officers then took him and questioned him for some 12 hours.

The Lebanese Army did not respond to questions about why it interrogates the herders. Mr. Zahra’s father, Kassem Ali Zahra, 62, said he thought that the Lebanese Army worried that shepherds could be recruited as Israeli spies.

“The government becomes suspicious of us,” said the elder Mr. Zahra, smiling at one of two Lebanese intelligence officers who were standing nearby and closely watching his interview.

On a recent day, three generations of the Zahra family gathered near the Blue Line.

Hassan Zahra had been in the mountains all day and made his way down the slope with his goats, toward his father; his brother; and Kassem, his 7-year-old nephew. His father filled two troughs with water for the animals.

The elder Mr. Zahra looked over at Kassem, who carried a stick as tall as he was and imitated the movements and sounds of his elders to call the goats, learning the family trade.

“We’re all afraid for their futures,” Mr. Zahra said.

U.N. peacekeepers in a small outpost nearby patrol around the clock and have radars that detect air violations of the Blue Line, which happen almost daily by Israel.

When the peacekeepers see herders approaching the division, they blow whistles to warn them, said Lt. Col. Abhinav Bakshi, who oversees a contingent of Indian troops monitoring about two and a half miles of the Blue Line that is unmarked.

“If they don’t cross, it is easier for me because otherwise that’s two sleepless nights until we get them back and do a head count,” he said. “The shepherd doesn’t realize it is a line because it is an imaginary line.”

As he spoke, an Israeli surveillance drone whirred overhead, a violation of the Blue Line’s rules.

This year, Colonel Bakshi said, there has been a rise in reported breaches of the Blue Line, with a minimum of two a day. About 40 percent of them involved herders and their flocks, he added.

Referring to the detentions of herders by Israel, Muhammad Hashim, governor of the southern Lebanese town of Shebaa, said, “The enemy takes them under the belief that they could be working for the benefit of the resistance.”

“But the resistance has its own people, it doesn’t need shepherds,” he added, referring to Hezbollah.

Mr. Hashim noted that the area was predominately Sunni Muslim, with a small Roman Catholic minority, and that support there for Hezbollah, a Shiite group, was limited.

Another herder, Maher Hamdan, 28, said that he was taken by Israeli troops twice this year.

The first time was on Jabal al Sheikh, the mountain which rises behind his family’s home.

“It was an ambush, I didn’t cross the line,” he said. “I know there is danger there because I’m near the Blue Line, but there is no sign.”

He said that he was strip-searched, handcuffed, blindfolded and taken to an Israeli military barracks where he was interrogated for hours about whether Hezbollah had a presence on the mountain. He told them no.

Sometime after midnight, he said, they returned him to the same point where he had been captured and was released without the United Nations getting involved.

Then in June on the same mountain, in a rocky area with no trees, he came upon some soldiers lying on the ground in wait, he said. He ran away, but the soldiers started shooting toward him.

“I could see the dust as the bullets hit the ground around me,” he recalled.

He was quickly surrounded by soldiers with their rifles trained on him, and taken away for interrogation, he said. This time, he noted, the military intelligence officers asked him where his house was and made him point it out on a map.

Mr. Hamdan still goes back to the same mountain every day so his goats can graze, knowing he could go through the same ordeal. But he, like other herders in the area, said that he had no choice.

“Our mountain is small and Israel has taken most of it. We need to go where there is food for the goats,” he said. “If they just look at me, it’s clear I’m not Hezbollah.”