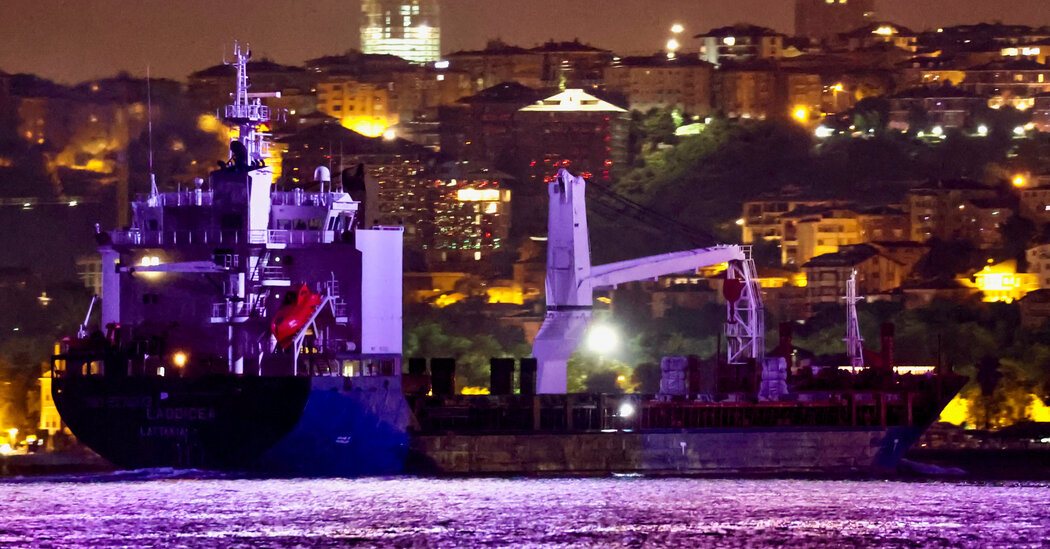 Lebanese authorities said Friday that they were investigating a Ukrainian claim that a Syrian ship under U.S. sanctions that docked in the northern Lebanese port of Tripoli was carrying Ukrainian grain stolen by Russia.

The Laodicea, a Syrian-flagged cargo ship owned by the state transport company, arrived in Lebanon on Wednesday carrying nearly 10 tons of wheat and barley. Soon after, the Ukrainian Embassy alerted Lebanese authorities that they believed the grain had been stolen by Russia. Russia is a close ally of President Bashar al-Assad of Syria, and intervened in that country’s civil war to prop him up.

Lebanon’s customs authority is inspecting the ship’s documents to assess whether the cargo is under sanctions or was stolen, according to Raymond El Khoury, director general of the authority. But he said that the Ukrainian Embassy had sent no evidence to back up its allegations, and that if no proof was found that the grain was stolen, it would be unloaded. It was not clear where the grain was ultimately bound.

“We are still conducting our investigation” Mr. El Khoury said. “I can’t play a pirate and stop ships without evidence.”

At a news conference on Friday afternoon, Ukraine’s ambassador to Lebanon, Ihor Ostash, said that the ship was on a list of 78 that Ukrainian law enforcement agencies had proven were involved in the illegal transport of stolen Ukrainian grain. A Ukrainian judge issued an order on Friday to seize the Laodicea along with the cargo carried on board, Mr. Ostash said.

The United States warned in May that Russia was trying to profit from its plunder of Ukrainian grain, which accounts for one-tenth of global wheat exports. Much of the stolen grain has been trucked to ports in Crimea, which Russia controls, and then loaded onto Russian cargo vessels, including some under Western sanctions, according to Ukrainian officials. Ukraine has accused Russia of stealing up to 500,000 tons of wheat, worth $100 million, since its invasion in February.

The Russian Embassy in Lebanon told a local TV channel that the Ukrainian accusations were false and said the ship was not connected to the Russian government.

The Laodicea has been under U.S. sanctions since 2015, as part of a broad effort to exert pressure and isolate the Syrian government for its brutal actions during the civil war. The vessel left the Turkish port of Izmir on July 7 and made its way toward the Black Sea, with stops at more Turkish ports, according to detailed navigation data collected by the maritime website MarineTraffic.

The ship apparently turned off its satellite transmitter and after a brief disappearance from the map, the Laodicea re-emerged on July 21, halfway through the Black Sea on its way south toward the Turkish straits of the Bosporus.

Ukrainian authorities say the ship went to a Crimean port and was loaded with stolen Ukrainian grain while its transmitter was offline, and traveled close to the Turkish coast past Cyprus before reaching Tripoli, Lebanon.

Ships transporting Ukrainian grain have used a number of tactics for masking their activities, including turning off their transponders, according to a former U.S. undersecretary of state, James K. Glassman, a spokesman for the Initiative for the Study of Russian Piracy, which recently published a report investigating Russia’s theft of Ukrainian grain and steel.

He said that the Russians also mix their own grain with Ukrainian grain to avoid sanctions. Russia and Ukraine grow different types of grain due to their climates, and when they are mixed it is harder to distinguish them.

Mr. El Khoury said that since the Laodicea had stopped in Turkish ports before arriving in Lebanon, Turkish authorities would have seized the ship if there were any issues with the grain. The Turkish government did not immediately respond to a request for comment.

Turkey helped broker the deal that Ukraine and Russia signed last week to allow for the resumption of Ukrainian grain exports.

Joe Biden did not regret referring to Vladimir Putin as a ‘killer’: White House