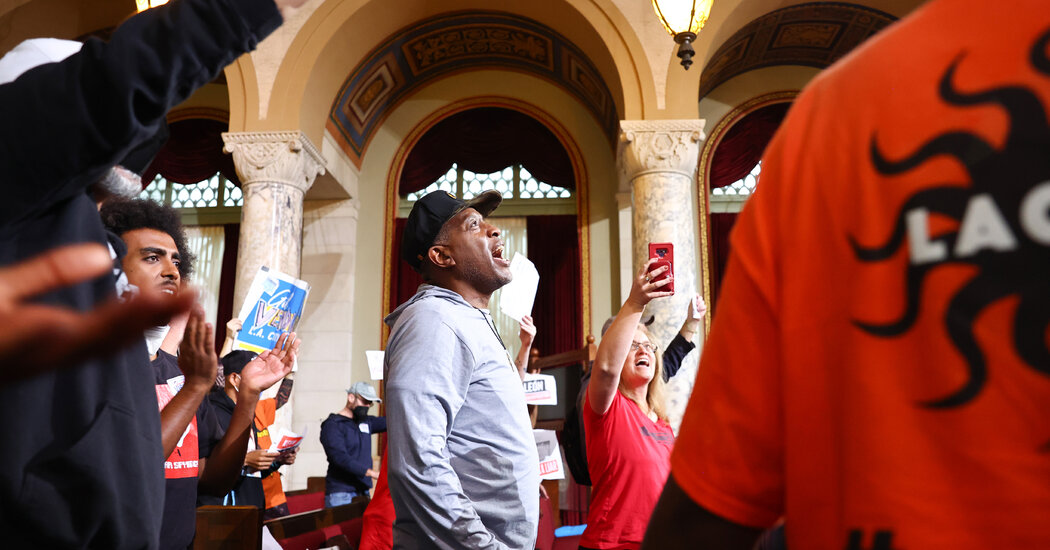 Residents are frustrated over homelessness, crime and rising costs. Two candidates for mayor, Karen Bass and Rick Caruso, say they can turn the tide.

LOS ANGELES — It was Saturday and sunny in the nation’s second most populous city, but the Rev. James McKnight’s mood was grim.

To the west of downtown, in Brentwood, Craig and Dena McFadyen, who work in television, echoed his assessment. How, they asked, were two incomes not going farther? And when was the city going to finally feel safe again? Not long ago, the couple, who are in their late 40s and the parents of a young child, said they watched from their window as a knife fight broke out between a bicycle thief and bystanders who had chased him into their carport.

To the east, in the neighborhood of Eagle Rock, Orhan Ayyuce, an architect, said that Los Angeles had become so fractured and expensive that he was pondering a move to Albuquerque. To the north, the San Fernando Valley residents Fred and Dora Cortez said the metropolis in which they had been born and raised seemed unrecognizable to them.

As Los Angeles prepares to elect its first new mayor in nearly a decade, problems that have festered since the pandemic began are taking a psychic toll. In polls and surveys, as well as in dozens of recent interviews across the sprawling city, Angelenos say they are exhausted. It is a refrain that has echoed across the country as Americans express rising anxiety about a quality of life they fear is deteriorating beyond their control.

For most of this year, the two candidates, Rick Caruso, a billionaire developer, and Karen Bass, who has long represented southwest Los Angeles in Congress, have portrayed themselves as the antidote to the city’s woes. Ms. Bass, 69, was once a heavy favorite, drawing on support from an army of Democratic political backers, but Mr. Caruso, 63, has used nearly $100 million in campaign spending on a law-and-order message to make the race nearly a dead heat heading into Tuesday.

Whoever wins will have an unenviable task.

Tent camps, while fewer than last year, still block sidewalks in neighborhoods from the beach to the La Brea Tar Pits. Armed guards patrol the Grove, an upscale shopping district developed by Mr. Caruso. Last month, three Latino City Council members were caught on tape making disparaging and racist remarks about other ethnic groups and colleagues, a blow to the city’s self-image as a model for an increasingly diverse nation. More recently, a banner that read “Kanye is right about the Jews” appeared over the 405 freeway after antisemitic rants by the rapper now known as Ye.

Though violent crime in the city is still well below what it was in the 1990s, it has ticked up more than 11 percent since late 2020, according to the Los Angeles Police Department. Yet based on media coverage and public sentiment, “you’d think it had doubled,” Eric Garcetti, the outgoing mayor, said.

A citywide poll done early this year by the Center for the Study of Los Angeles at Loyola Marymount University found that for the first time since 2012, a majority of Angelenos felt the city was going in the wrong direction. In September, 82 percent of likely voters in Los Angeles County told the Public Policy Institute of California that homelessness was not only a problem, but a big one.

“Even before three members of the City Council self-immolated, people in Los Angeles were legitimately unhappy,” Darry A. Sragow, a Democratic political consultant, said, citing a series of focus groups he did late last year that revealed an “almost clinical depression” among nearly every demographic category of voters.

Most, he said, had lost faith that government could fix the city’s problems, a red flag for elected officials hoping to build consensus.

“The next mayor of Los Angeles is going to inherit an incredible mess,” he said.

Sprawled over more than 450 square miles, Los Angeles has a government structure that was designed to resist the concentration of power. Compared with other big-city systems, its mayor’s office is relatively weak.

The mayor has to share authority over budget making and appointments with the City Council, and state and county governments control many of the resources needed to effectively address local problems — resources to deal with Covid-19, for example, or social services to treat mentally ill people in tent camps.

The mayor also has no power over the city’s school district, the nation’s second largest, unlike in New York, Chicago and Washington. And the vast majority of residents in greater Los Angeles live outside the city limits, so major initiatives often require cooperation from nearly 90 surrounding municipalities in Los Angeles County alone, many of which are happy to lure away residents and businesses that generate tax dollars.

Mr. Garcetti, who is ineligible to run for re-election because of the city’s two-term limit, said his successor would have the advantage of being a fresh face for voters with an assortment of incoming projects, including preparations for the 2028 Olympics. He said the job still comes with a powerful bully pulpit and outsize influence among municipalities in the vast region.

By some measures, Los Angeles has shown visible progress. Pandemic deaths and hospitalizations have ebbed, the unemployment rate is a mere 4.5 percent, and a long-sought rail line to Los Angeles International Airport is nearly finished.

But Mr. Garcetti agreed that “people feel like the California dream is slipping away.”

Since his election, he said in an interview last week, the city has added thousands of housing units that come with support services and has built more than two dozen new homeless shelters. But thousands of residents still sleep on sidewalks, under overpasses and in alleys, in part, he said, because the city’s fragmented institutions cannot keep up with the need for housing.

How we call winners on election night. We rely on The Associated Press, which employs a team of analysts, researchers and race callers who have a deep understanding of the states where they declare winners. In some tightly contested races, we independently evaluate A.P. race calls before declaring a winner.

Here’s more about how it works.

“Pessimism at the national level has dribbled to the local level,” the mayor noted. “And I think people are just tired.”

Just over two years ago, Ms. Bass was on the short list to be the running mate for the Democratic presidential nominee, Joseph R. Biden Jr. She has long been known to Angelenos, going back three decades to her days leading a coalition of Black and Latino community members through her election to the State Legislature and Congress.

If residents are familiar with Mr. Caruso, it is for a different reason: their years of shopping at his glittering malls. While he has not served in elective office, he has deep civic ties, having served on panels overseeing the Los Angeles Police Department, the city’s Department of Water and Power and the University of Southern California.

The candidates’ policy differences are slim. Both have emphasized a need for public safety and have vowed to put more officers on the street. Both have expressed “heartbreak” at the bigoted remarks on the released audio and called for all involved to resign from office.

Their positions on homelessness are more pronounced: Both have said they will treat the issue as an emergency, closing homeless encampments and moving people into temporary and permanent housing that comes with support services. Mr. Caruso has made an aggressive pledge to house 30,000 people in 300 days; Ms. Bass has said that is unrealistic, and has promised to house 17,000 or so in 365 days.

The candidates have been in attack mode, as often happens in close races. In a $50 million-plus ad blitz that has inundated the city’s airwaves, Mr. Caruso has sought for months to portray Ms. Bass in multiple languages as a Democratic insider with few new solutions. Her campaign has lashed back, reminding the heavily Democratic electorate that Mr. Caruso was a Republican who registered as a Democrat only recently — and that despite the seat being nonpartisan, party loyalty matters.

“If you lie about who you are, if you lie about who other people are, how could you possibly bring the city together to meet the needs that we have in Los Angeles right now?” Ms. Bass asked at a recent news conference after being endorsed by former President Barack Obama.

Mr. Caruso — who has changed his party preference several times since 2011, mostly between Republican and independent until he registered as a Democrat this year — has countered that he left the G.O.P. because he disagreed with former President Donald J. Trump and that his party affiliation is a red herring.

“And the residents of Los Angeles that I’ve talked to could care less. The crime issues, the homeless issues, they’re not red issues, blue issues or white issues. They’re issues that are affecting their lives every day.”

But in interviews around the city, voters almost without exception said that the city’s challenges were beyond the next mayor’s scope.

“It feels like no one is working for the people, that everyone just has their own political game,” said Jocelyn Callot, a nurse on the city’s Eastside, who is undecided. “And the city has never been like this. No one can afford to live here. And I’m not confident in how politicians can make a change.”