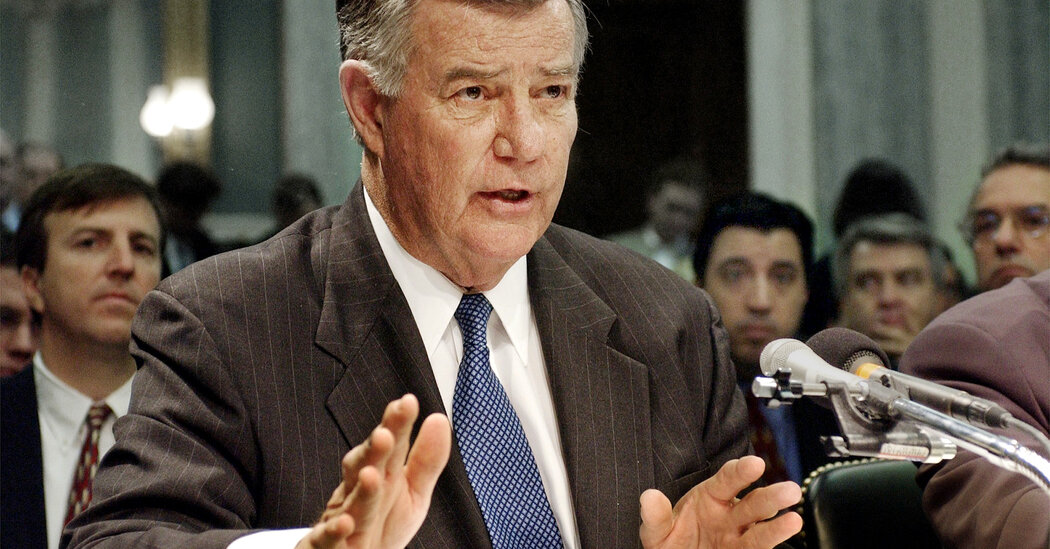 He built his company, Clear Channel, from a single struggling station into one of the world’s biggest media empires.

Lowry Mays, a businessman who inadvertently acquired a local radio station in the early 1970s, then built it into a media empire called Clear Channel that revolutionized the entire industry, died on Sept. 12 at his home in San Antonio. He was 87.

A representative from the Mays Family Foundation, a nonprofit that Mr. Mays founded with his wife, Peggy, confirmed the death but did not provide a cause.

Mr. Mays was a petroleum engineer turned investment banker when he agreed in 1972 to co-sign a loan to purchase KEEZ, an FM station struggling to survive at a time when most people still listened to AM. When the original buyers backed out, Mr. Mays and his business partner, Billy Joe McCombs, were left owning a property they had no interest, let alone experience, in operating.

Mr. Mays did, however, have a master’s degree in business administration from Harvard, as well as a gift for fixing failing balance sheets. He bought more stations over the next 25 years and branched into television in the late 1980s. He ran a tight operation, keeping costs low, cash flow high and Wall Street eager to finance his every move.

When Congress loosened regulations on the radio industry in 1996, Clear Channel was ready. Over the next five years, Mr. Mays went on a spending spree, growing the business from 40 stations to some 1,200 by 2001, more than triple the number of its closest competitor, Cumulus. At that point, Clear Channel controlled an estimated 10 percent of all radio stations, an astounding achievement in an industry that, until then, had been run by mostly mom-and-pop operations.

Thanks to Mr. Mays’s obsession with cash flow, Clear Channel proved one of the best-performing companies of the 1990s, with sales rising from $74 million in 1992 to $8 billion in 1999.

His success, though, invited backlash. Artists claimed that Clear Channel was engaged in pay-to-play arrangements. Activists accused the business of favoring conservative voices and issues, particularly during the run-up to the Iraq War. And critics said that its market dominance was squeezing out smaller companies — and with them, musical diversity.

“Everybody gets the same McDonald’s hamburger,” the musician Don Henley testified before Congress during hearings in which several senators excoriated Mr. Mays and his company.

Mr. Mays was nonplused. He was, after all, just a businessman, and he was neither sentimental about the products he sold nor particularly interested in their aesthetic details.

That lack of sentimentality continued to serve him well when, a few years later, he decided to get out of the business completely. He had surgery in 2005 following a minor stroke, and though he remained engaged with the company, he handed over most day-to-day operations to his sons and longtime lieutenants, Mark and Randall Mays.

For all the changes that he had brought to the music industry, he could also see that even more disruption was coming, thanks to the internet. In 2006, he agreed to sell the company to the private equity firms Thomas H. Lee Partners and Bain Capital for $17.9 billion.

Clear Channel’s fortunes changed almost immediately. It was shackled by debt, hampered by the Great Recession, challenged by changes in consumer taste and, critics said, undermined by listeners’ aversion to a radio monoculture that Mr. Mays had helped usher in. The company struggled for years, even after rebranding itself as iHeartMedia in 2014.

Mr. Mays kept a low profile and was famously press shy, particularly for a Texas billionaire. But he did grant the occasional interview, including a brief conversation with Texas Monthly in 2018.

When asked why he had sold Clear Channel when he did, he replied simply, “It was best for the family to sell and take the chips off the table.”

Lester Lowry Mays was born on July 24, 1935, in Houston and was raised in the Dallas suburbs. His father, a steel executive named Lester T. Mays, died in a car accident when Lowry was 10, leaving his mother, Virginia (Lowry) Mays, to keep the family afloat by selling real estate.

Lowry Mays studied petroleum engineering at Texas A&M University, working summers on oil rigs. He graduated in 1957 and joined the Air Force, where he oversaw the construction of an oil pipeline in Taiwan — an experience that involved managing 10,000 people, giving him his first taste of running a big organization.

Mr. Mays married Peggy Pitman in 1959. His wife died in 2020. Along with his sons, he is survived by his daughters, Kathryn Mays Johnson and Linda Mays McCaul; 16 grandchildren; and three great-grandchildren.

After receiving his M.B.A. from Harvard in 1962, Mr. Mays returned to Texas, where he worked for an investment firm for eight years before starting his own in 1970.

He proved to be an adept businessman: In order to drum up investors for a San Antonio photo developing company, he hired one boy to write down the license plates of all the cars in the developer’s parking lot, and another to get the addresses for all of the plates at the Department of Motor Vehicles. Mr. Mays then sent a solicitation letter to each address.

He founded the San Antonio Broadcasting Company in 1972, soon after acquiring KEEZ, and changed its name to Clear Channel in 1975. Though he had never shown an interest in media, he immersed himself in the business. He understood the great potential for talk radio better than most, and switched several of his early acquisitions to that format; many observers have credited Clear Channel with driving the boom in conservative talk shows in the 1990s.

Even as the company grew rapidly, he insisted that his goal was not market dominance, or even growth itself. In an industry full of outsize personalities both onstage and in the boardroom, he succeeded by being quiet, even boring.

After a Pandemic Hiatus, the Bulls Are Running Again in Pamplona