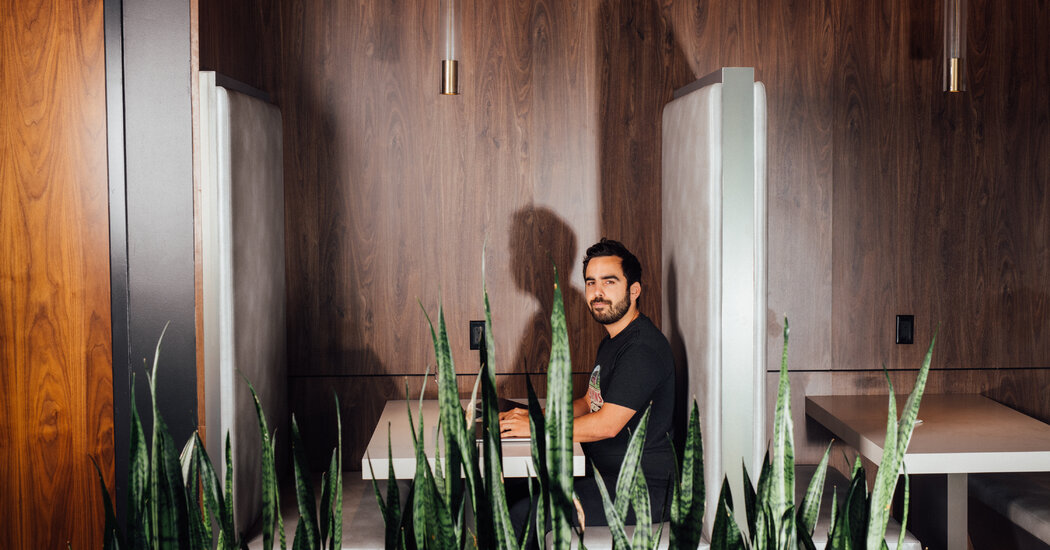 Developers are adding professional office spaces to the list of amenities in their mostly new buildings in cities around the country.

When Christopher Dossman and his wife, Yao Li, were looking for an apartment in New York last year, they compiled the usual list of preferences: washer/dryer, proximity to a grocery store, subway access. But a top priority for them was a work-from-home space.

In April, the couple moved into the Willoughby, a 34-story tower in Downtown Brooklyn, paying $4,300 a month for a one-bedroom. The building is unfinished, but they chose it because it provided a crucial amenity: a co-working space on the 22nd floor that includes semiprivate banquettes and a conference room with a view of Fort Greene Park.

“Every day I am up there,” said Mr. Dossman, an entrepreneur who has founded several tech start-ups. “There are some days I don’t leave the building at all.”

As corporate America adapts to employee requests for flex schedules, Mr. Dossman is part of a growing number of workers who want to work remotely, but not necessarily from their living room couches or kitchen tables.

The pandemic forced an exodus of workers from offices in 2020. Even as workplaces reopen, 59 percent of employees are still working remotely, according to a survey released earlier this year by the Pew Research Center. Among those remote workers, 78 percent say they want to continue to do so after the pandemic, up from 64 percent two years earlier.

“It’s something you have to do today; it’s an amenity, like a pool,” said Ric Campo, the chief executive and chairman of Camden Property Trust, which included a work space called the Hub in the common area at Camden Harbor View, a residential development in Long Beach, Calif.

At most buildings, the cost of the work spaces is included in the rent, but some landlords charge a fee to reserve a room for a large meeting or an extended period. Co-working firms like Industrious and WeWork are beginning to take notice, hoping not to get edged out of what could become a lucrative market.

Developers have been adding space to apartments for years as architects design bedrooms and alcoves that can accommodate desks and other work equipment, a trend that has only accelerated in the pandemic. The size of the average new apartment has increased 9.6 percent since the start of the pandemic compared with those delivered in the 10 years before the pandemic, said Matt Vance, a senior economist for the real estate services firm CBRE. The increase is equal to an extra 90 square feet, or the size of a bedroom or work space.

He added that the demand for work spaces has extended to common areas, too. “Over the last decade, we have had cybercafes with booths and coffee machines, shared spaces in apartment buildings,” he said.

But as Americans settle into a hybrid work model, they are seeking more professional spaces where they can hold a private Zoom call or gather clients for a presentation without heading into the office.

“People have high expectations,” said John G. Weigel, a senior development executive at DivcoWest, a real estate services firm. “We are incentivized to make sure this is as robust as it can be.”

DivcoWest’s portfolio includes Park 151, a 20-story multifamily complex in Cambridge, Mass., set to open this fall with 468 apartments and a common area that will include five dedicated work-from-home spaces and conference rooms.

“It is a significant portion of our amenity package, and it has gotten larger,” Mr. Weigel said. “Now that the viability of working from home has been proven, we will see more of this.”

Other developers are switching gears midway through construction. At Brooklyn Crossing in Prospect Heights, Thomas Brodsky, a partner at the family-run development firm Brodsky Organization, scrapped plans for an open lounge and added semiprivate cubicles and “phones booths” instead to the building’s co-working space, scheduled to open in August.

And the developer Macklowe Properties beefed up the technology at One Wall Street, a condominium in downtown Manhattan, adding microphones and cameras for virtual meetings and booths for podcasting to its co-working space, now branded One Works by One Wall Street, said Richard Dubrow, the firm’s director of marketing.

The increased interest in work-from-home spaces comes as companies grapple with their shrinking office footprint. Metropolitan areas with a higher percentage of employees working from home had higher office vacancy rates from the end of 2019 to the end of 2021, according a report released in May by Moody’s Analytics.

Real estate watchers say the concept has legs and, if managed properly, could be successful in the long run.

“There is such strong demand from multifamily residences for this space that we think it’s going to be a sticky trend,” Mr. Vance of CBRE said.

The model could be expanded in higher density areas to include the surrounding community, said Thomas LaSalvia, a senior economist at Moody’s Analytics. “It doesn’t have to be the residents of that apartment building using that space; it could be neighbors,” he said.

That larger vision has drawn interest from Industrious, a workplace provider that has 150 locations in 65 cities worldwide. “There are starting to be developers that want to create a complex that services the tenants and the outside world,” said Jamie Hodari, the chief executive and a co-founder of the company.

He pointed to Monrovia, Calif., where AvalonBay Communities, a real estate investment trust that owns a stake in 296 apartment communities, is renting private work spaces on the ground floor of its apartment complex to residents and the general public under a brand called Second Space Work Suites.

Mr. Hodari added that a number of large apartment owners had reached out to his firm about a partnership. “We are pretty close to an announcement with one of them,” he said.

Tenants have a variety of reasons to look for a “third space,” a communal area distinct from home and the office. Their home office may be too small or have too many distractions or not look professional enough for an important virtual call with clients.

And some, like Mr. Dossman, may have a spouse who also wants to work from home.

“Most of my work is talking to other people,” he said. “It wouldn’t work if we had calls at the same time.”

The added benefit of a work-from-home space has forced some tenants to re-evaluate how much room they need in their own apartments.

Amina AlTai, a career and business coach, was drawn to One South First, a luxury building in Brooklyn’s Williamsburg neighborhood, because of its work-from-home space, which includes two private conference rooms and a larger boardroom. She reluctantly took a studio apartment in the building because nothing else was available, but when a one-bedroom opened up, she realized she did not need it.

“That amenity space is amazing,” she said. “I use it at least twice a month.”

For Ms. AlTai, the space allowed her to resume in-person meetings, a crucial part of her business that was cut off in the pandemic. She had tried typical co-working spaces, but said the quality was inconsistent. At One South First, she pays $100 for a four-hour rental of a private room where she can place her client in a chair looking out over Domino Park and the East River.

“Sometimes there are some experiences that cannot be translated through the screen,” she said.

These spaces can help tenants cut other monthly costs, too, including transportation and dining out. “If I’m not commuting, I’m saving $100 a month,” Mr. LaSalvia of Moody’s said.

But one of the most overlooked benefits is something an apartment alone cannot provide, one that many workers are seeking after two years of remote work: a social experience. “It creates a more communal vibe,” Mr. Vance said.

At the Willoughby, Mr. Dossman and Ms. Li have gotten to know their neighbors through social events like happy-hour mixers and wine-tastings in the work-from-home space. The experience inspired him and a friend to set up a meeting with other start-up founders in New York, saying it would cost $250 an hour to host an event in the building.

“We looked at a couple different places for events, and it’s way cheaper than a bar,” he said. “This is a good place to be and it’s getting better.”

Woman given two doses of Covid vaccine by UP nurse as she was busy...