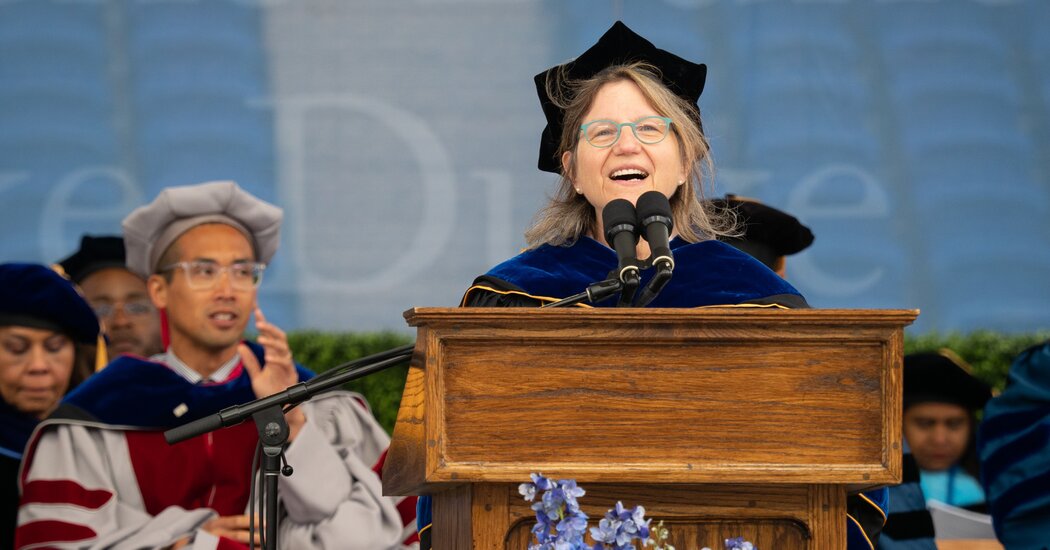 Sally Kornbluth, a cell biologist, is the second woman to lead the university. The provost, chancellor, dean of science and chair of corporation are also all women.

M.I.T. announced the selection of a new president, Sally Kornbluth, a cell biologist and provost at Duke University. She will be the second female president of the university, and will join a long list of women in its top leadership ranks. The provost, chancellor, dean of science and chair of the M.I.T. Corporation, the school’s governing body, are all women.

The corporation elected Dr. Kornbluth, 61, to the post on Thursday morning, and she will take over the presidency on Jan. 1, 2023, succeeding L. Rafael Reif, who announced in February that he would be stepping down after 10 years at the helm of the university.

It is high season for change at universities. The Massachusetts Institute of Technology, in Cambridge, Mass., is among the first to fill a vacancy, but presidential searches are also underway at Harvard, Howard, New York University and Columbia, among the more prominent schools. Dartmouth announced in July that Sian Leah Beilock, the president of Barnard College, will be its next leader. These searches are being conducted at a time when universities are emerging from the crisis of the pandemic and dealing with heightened concerns over diversity and affirmative action.

Lee Bollinger, president of Columbia for the past 21 years, will depart at the end of the next academic year. Dr. Wayne A.I. Frederick, a surgeon trained at Howard who began as interim president in 2013, will leave in 2024. The president of New York University, Andrew Hamilton, will step down next year in his eighth year on the job.

At a news conference announcing her appointment, Dr. Kornbluth talked about how she had been a political science major at Williams College when she took a biology class that changed her life.

“Suddenly, I found myself fascinated by how cells function,” Dr. Kornbluth said.

She went on to get her Ph.D. in molecular oncology at Rockefeller University. She joined Duke as a faculty member in 1994 and two decades later was appointed provost, serving as the chief academic officer.

During the news conference, she also touched on how to build up M.I.T.’s cohort of Black, Hispanic and female students. At Duke, she said, she “took steps to improve the environment for our faculty of color,” and to expand hiring. She said that while she was there, Duke had raised money for projects like a Black writing group and a Black think tank.

Her appointment, and the search for other university presidents, comes as the Supreme Court is about to hear oral arguments on affirmative action policies at Harvard and the University of North Carolina. The court, now more conservative, is expected to restrict if not overturn those policies, which would force universities to find other ways to foster a diverse student body.

“M.I.T. will always follow the law, but it’s going to be critical to think about ways, regardless of what comes out of the court decision, to maintain a diverse and vibrant environment,” Dr. Kornbluth said. She added that M.I.T. does not give preferences to children of alumni and that one in five students is a first generation college student. “Those are things that we have to lean into going forward,” she said.

She also felt a responsibility as a role model, who believes, she said, that it is “the responsibility of women who have had successful careers to help the next generation coming up.”

M.I.T.’s undergraduate population, a total of 4,638 students, is 51.9 percent male and 48.1 percent female for the 2022 academic year. An internal study of gender diversity at the university in 2017 found that while the share of women had grown over the past decade in departments like electrical engineering and computer science, women were still overrepresented in introductory classes, perhaps because they lacked the confidence to skip them. M.I.T. officials said that its “general institute requirements” mean that no one — male or female — can escape taking certain science classes like organic chemistry, fluid dynamics, high-level mathematics, physics and other core courses regardless of major.

M.I.T. was not without controversy during Dr. Reif’s 10-year-long tenure, and Dr. Kornbluth could be facing issues similar to ones that have created waves of protest at other institutions.

Dr. Reif was on the defensive over the university’s commitment to free speech in 2021 after the cancellation of a lecture on climate change by Dorian Abbot, an associate professor of geophysics at the University of Chicago. Dr. Abbot had angered some students and alumni by writing that diversity, equity and inclusion programs treated people as a group rather than individuals, and that those programs led to a form of self-censorship among those who disagreed with them. He said the situation was reminiscent of the “ideological regime obsessed with race” that drove scholars out of German universities during the Nazi era.

Dr. Abbot gave his speech at Princeton instead. In the wake of criticism, Dr. Reif authorized a free speech working group to come up with a statement of principles, and last month asked the faculty to consider the proposed statement.

The university was one of the first to adopt a more lenient grading system temporarily during the chaos of the pandemic. It also suspended the use of standardized test scores in admission. But in March, M.I.T. reinstated its requirement that students submit ACT or SAT scores for admission. It said that the admissions office found that these scores were important to assessing the academic preparation of applicants from all backgrounds, but even more so as a tool for identifying well-prepared socioeconomically disadvantaged students.

Dr. Reif clashed with the Trump administration over immigration policy, and defended Chinese scholars against allegations of espionage, saying that as a group they were being stigmatized.

M.I.T. was embarrassed by revelations of fund-raising ties between the school’s Media Lab and Jeffrey Epstein, the financier and convicted sex offender who died in his jail cell in 2019 after being arrested on sex trafficking charges. An investigation found that Dr. Reif was not involved in deciding to accept Mr. Epstein’s funding but had signed what he called a pro forma thank you letter.

Uvalde Fires Its School Police Chief in Response to Shooting