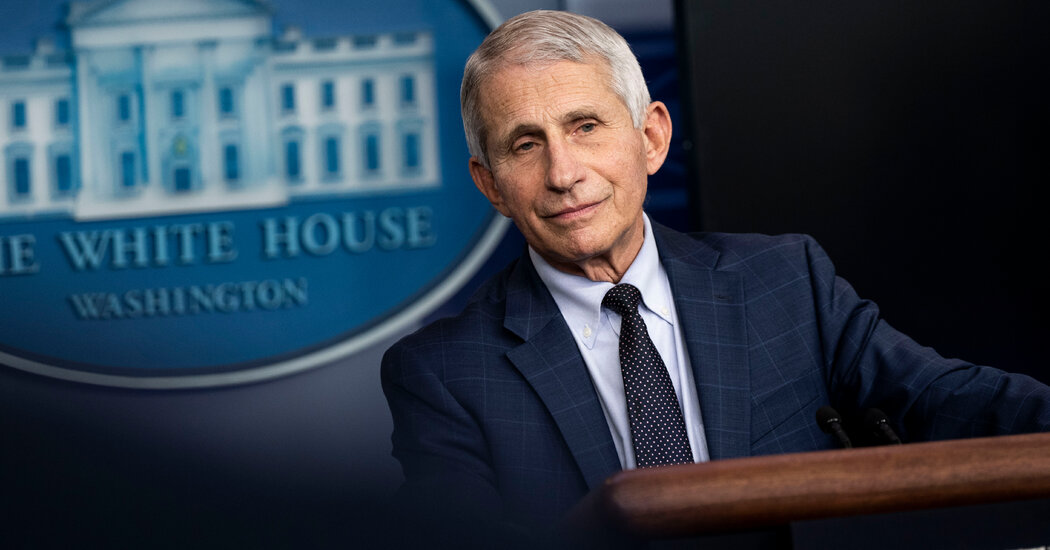 Thomas Patrick Connally Jr., 56, pleaded guilty in May to making threats against a federal official and also admitted to sending threatening messages to other health officials, federal prosecutors said.

A federal judge on Thursday sentenced a West Virginia man to more than three years in prison for sending threatening emails to Anthony Fauci, including one in which he said the immunologist and his family would be beaten to death and set on fire, prosecutors said.

The man, Thomas Patrick Connally Jr., 56, had pleaded guilty in May to making threats against a federal official and also admitted to sending threatening messages to other health officials, including Francis Collins, the former director of the National Institutes of Health, according to the U.S. Attorney’s Office in Maryland.

Judge Paula Xinis of U.S. District Court in Maryland sentenced Mr. Connally to 37 months in prison followed by three years of supervised release. Mr. Connally admitted in a plea agreement that he had sent the messages to Dr. Fauci, the director of the National Institute of Allergy and Infectious Diseases, between Dec. 28, 2020, and July 25, 2021, using an anonymous and encrypted email account, federal prosecutors said in a statement.

According to court documents, in one email, dated July 21, 2021, Mr. Connally wrote to Dr. Fauci: “I will slaughter your entire family. You will pay with your children’s blood for your crimes.”

A lawyer for Mr. Connally could not immediately be reached late Thursday.

In sentencing documents dated Wednesday, Ellie Marranzini, a federal public defender, said that the isolation of Mr. Connally’s mother in a nursing home during the pandemic had caused Mr. Connally stress. Ms. Marranzini said the impact of social isolation on nursing home residents was “a topic he was acutely concerned about at the time.”

Mr. Connally’s threats to Dr. Fauci and others came amid an intense period of vitriol against health officials who had advocated for measures like masking and social distancing to stop the spread of Covid-19.

Dr. Fauci, a government scientist for more than half a century, stood out among health officials in drawing the rage of critics. While his commitment to science endeared him to many, he became a villain to many others.

Supporters of Donald Trump often chanted “Fire Fauci,” and as president, Mr. Trump himself openly mused about doing so. Dr. Fauci was accused of having invented the virus and of profiting from vaccines.

“Everyone has the right to disagree,” Erek L. Barron, the U.S. attorney for Maryland, said in a statement on Thursday. “But you do not have the right to threaten a federal official’s life.”

In addition to threatening Dr. Fauci and Dr. Collins, federal prosecutors said, Mr. Connally also sent similar messages to Rachel Levine, a pediatrician and assistant secretary for health at the Department of Health and Human Services; a Massachusetts public health official; and a religious leader.

On April 24, 2021, Mr. Connally, most recently of Snowshoe, W.Va., sent Dr. Collins four emails starting at 9:34 p.m., threatening him and his family with physical assault and death if the scientist “did not stop speaking about the need for ‘mandatory’ Covid-19 vaccinations,” prosecutors said in the statement.

Investigators said that the anonymous email account was associated with Mr. Connally. In July 2021, the authorities arrested Mr. Connally in Snowshoe, searched his home and vehicle and seized five laptops and two cellphones, according to the statement.

In a sentencing memorandum filed on Monday, prosecutors called the series of emails sent by Mr. Connally a “campaign of terror.”

“Smart and technologically sophisticated, the defendant intended to heighten the terror he sought to instill by using a foreign encrypted email provider,” they wrote. “Using this provider also allowed the defendant to hide his identity and continue to send his threatening emails unabated.”