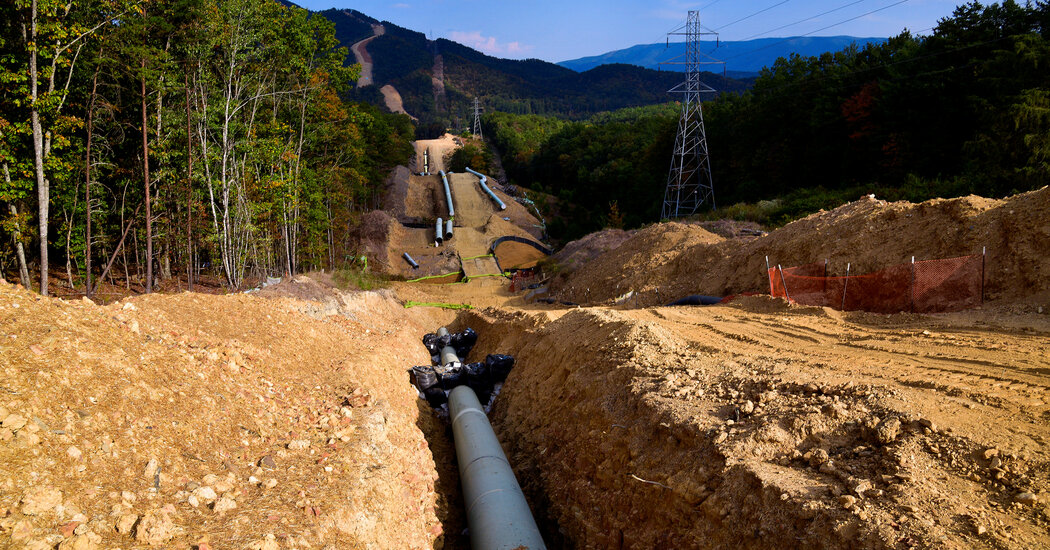 To secure the senator’s support for a climate and tax package, party leaders promised to pass a law to complete the line and to prioritize some other fossil fuel projects.

WASHINGTON — Senator Joe Manchin III of West Virginia has secured a promise from Democratic leaders and the White House to complete a highly contested 304-mile gas pipeline in his state, his office said, a major concession won as part of negotiations over a climate and tax bill.

Mr. Manchin, who clinched a surprise agreement last week among Democrats to pass landmark climate legislation, made easing permits for energy projects a requirement of the deal. On Tuesday, his office made public details of the side agreement he struck with Senator Chuck Schumer of New York, the Democratic majority leader, House Speaker Nancy Pelosi and President Biden.

It would ensure that federal agencies “take all necessary actions to permit the construction and operation” of the gas line, known as the Mountain Valley Pipeline. The project — which has been opposed for years by environmentalists, civil rights activists and many Democratic state lawmakers in Virginia — would carry natural gas from the Marcellus shale fields in West Virginia across nearly 1,000 streams and wetlands before ending in Virginia.

The pipeline was originally supposed to be completed by 2018 but environmental groups have successfully challenged a series of federal permits for the project in the United States Court of Appeals for the Fourth District in Richmond, Va.

The court has overturned permits issued by the Fish and Wildlife Service, the Bureau of Land Management and the Forest Service, saying that their analyses about adverse impacts on wildlife, sedimentation and erosion were flawed.

The delays have been so extensive that the project’s certification from the Federal Energy Regulatory Commission will expire in October. The developers are seeking an extension for a second time.

Jared Margolis, a senior attorney for the Center for Biological Diversity, one of the groups fighting the pipeline, acknowledge that Congress does have the ability to override the courts and move the project forward. But, he said, “That’s not going to prevent a challenge” from opponents.

The side deal cut by Mr. Manchin and Democratic leaders would give the United States Court of Appeals for the District of Columbia Circuit jurisdiction over all future legal challenges, taking the case away from the Fourth District, where environmentalists had found success.

Other parts of the agreement would make it harder for opponents to hold up energy projects under the National Environmental Policy Act, a bedrock environmental law, by setting a two-year time limit for challenges. It would also require the president to establish 25 “priority” projects on federal lands that must include fossil fuels and nuclear energy. And it would revise a section of the Clean Water Act in a way that would make it more difficult to block or delay pipeline projects.

Neither Mr. Schumer nor Ms. Pelosi responded to requests for comment. A White House spokesman also did not respond.

Some Democrats like Raúl Grijalva, the chairman of the House Committee on Natural Resources, have said they will not support any measures that fast-track pipelines or other energy projects.

But three people familiar with Mr. Manchin’s agreement said Democratic leaders were likely to insert the Mountain Valley Pipeline and permitting provisions into a must-pass piece of legislation, such as the bill that funds the federal government, to maximize its chances.

Mr. Manchin on Monday said he believed the United States needed to reform the rules around permits to increase energy production.

“Why are we going around the world asking people to do what we want to do for ourselves?” Mr. Manchin said. “How do we get a permitting process to meet the challenges that we have today and the urgency that we can’t do because of our permitting.”

Environmental activists denounced the Mountain Valley Pipeline and permitting deal, and called on Democrats to rethink that agreement with Mr. Manchin.

“The implications of this side deal are very significant especially as Congress is poised to accelerate the development of energy projects,” said Abigail Dillen, president of Earthjustice, an environmental group. She said she was particularly concerned that limiting the time to review and challenge projects could allow developers to “run roughshod over communities.”

Opponents of the Mountain Valley Pipeline called Mr. Manchin’s deal dangerous for water quality and the climate, noting that the creation of a new pipeline would guarantee additional greenhouse gas emissions into the future. The pipeline is expected to deliver more than two billion cubic feet of natural gas per day.

Notably, none of the environmental groups called for lawmakers to vote against the climate and tax package, which currently includes $369 billion over ten years to pivot the nation away from fossil fuels. Energy experts have calculated the overall package will reduce emissions as much as 40 percent below 2005 levels by the end of this decade, even with eased permitting and other measures that Mr. Manchin secured for fossil fuel development.

Some called the permitting deal a win for all energy development.

“This strikes me as a balanced approach,” said Neil Chatterjee, the former chairman of the Federal Energy Regulatory Commission.

Mr. Schumer has indicated he hopes to hold a vote on the broader climate and tax bill as early as this week.