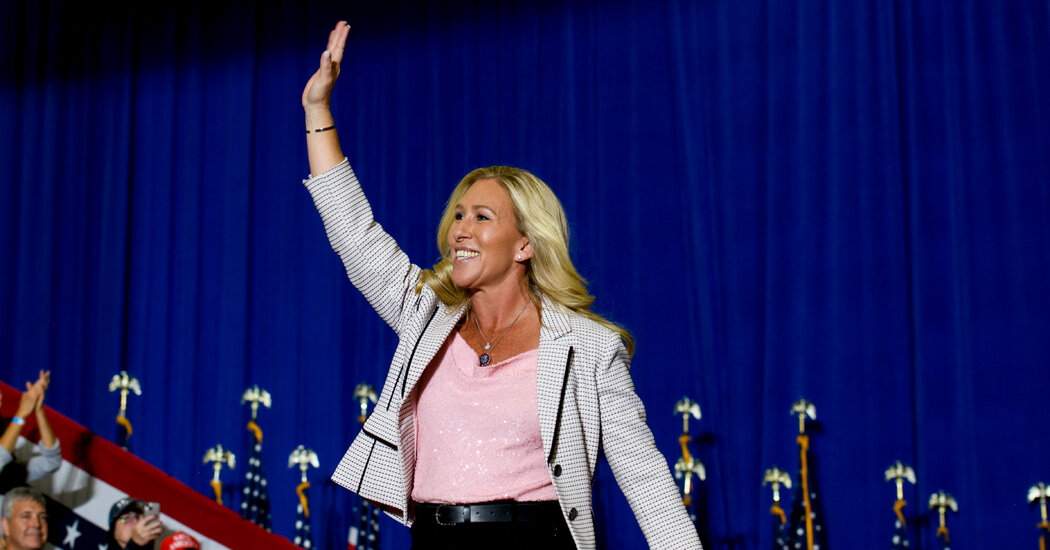 In February 2021, Representative Marjorie Taylor Greene of Georgia was dealt what would typically be considered a knockout blow in Washington politics: She lost her seats on House committees, where Congress does much of its work, because she had supported the QAnon conspiracy theory and spread other dangerous misinformation on social media.

But instead of being consigned to political oblivion, Greene has gained clout over the past two years, as my colleague Robert Draper explained in a New York Times Magazine profile of her that published online this morning.

Last month, Greene sat directly behind the House minority leader, Kevin McCarthy, as he unveiled his agenda for the midterm elections. Republican candidates often ask Greene to campaign for them. She has become a major fund-raiser within the party. And Greene told Robert she had talked with Donald Trump about being his running mate if he were to run for president in 2024.

“This is not at all what I expected when I began reporting on Greene,” Robert told me.

So how did Greene, who was a political pariah a few years ago, place herself at the center of Republican politics today?

Greene’s rise did not come about because she apologized and abandoned her extreme views. Instead, her core supporters rallied around her because they agreed with at least some of her beliefs and liked that she stood her ground — a narrative that echoes Trump’s ascent.

Greene herself is a big supporter of Trump and his policies and falsely claims that the 2020 presidential election was rigged against him. “She’s a perfect reminder that Trumpism will not go away even if he does,” Robert said.

One telling moment: Early last year, House Republicans met to discuss whether to remove Representative Liz Cheney of Wyoming from a leadership position after she voted to impeach Trump over the Jan. 6 attack. (They eventually did.) In that meeting, Greene justified her support for QAnon and other conspiracy theories — and about a third of the conference stood up and applauded her.

“The headline tonight is that we tried to kick out Liz Cheney, and we gave a standing ovation to Marjorie Taylor Greene,” Representative Nancy Mace of South Carolina warned at the time.

Since then, McCarthy, who would likely be speaker should Republicans regain control of the House in the midterms, has reportedly offered Greene prized committee assignments if she supports his run for the post — giving her back what she once lost, and then some.

Not every Republican is on board. Some worry that Greene’s style could hurt them in next month’s elections. And she often criticizes members of her party; last month, she said that “21 Republican senators just voted with the woke climate agenda” after they voted for an international climate agreement.

“She’s far more willing to offend than to accommodate,” Robert said. That could ultimately limit her rise.

Neoliberalism has failed to deliver the economy we need, Rana Foroohar writes.

World Through a Lens: Is this the most picturesque high dive?

Metropolitan Diary: When a stranger’s flip-flops save the day.

Quiz time: Take our latest news quiz and share your score (the average was 8.5).

Lives Lived: Mary Adelia Rosamond McLeod was the first female bishop to lead an Episcopal diocese. She died at 84.

Yankees survive: The Bronx will be buzzing tonight for a deciding Game 5 of the A.L. Divisional Series after New York edged Cleveland on the road last night. Gerrit Cole was excellent.

Eagles stay steady: Philadelphia remains undefeated after a 26-17 win yesterday over its division rival Dallas. It was impressive considering the surprises Week 6 had in store for the rest of the N.F.L.

Jordan Poole’s strange two weeks: The Warriors guard inked a four-year contract extension yesterday that guarantees him $123 million, days after a video was leaked of teammate Draymond Green punching Poole in the face at practice. Poole says the pair will be “professional.”

The man who bet on Neymar: The Brazilian supermarket magnate Delcir Sonda saw promise in the soccer star before he became a household name. Now, Sonda is going to court for the payday that he said never arrived, The Times’s Tariq Panja writes.

Cormac McCarthy, the Pulitzer Prize-winning writer of “The Road” and “No Country for Old Men,” is publishing his first novel since 2006 — and his second: “The Passenger,” is out Oct. 25, and “Stella Maris,” will be released Dec. 6.

The books have intertwined narratives. They focus on a tortured young mathematical prodigy and her brother. It’s a stylistic and thematic break from McCarthy’s earlier blood-soaked morality tales set in the American Southwest, The Times’s Alexandra Alter writes.

“But the novels are also recognizably McCarthy’s,” she adds, “laced with transcendent language and profound insights into human nature.”

For more: Read an excerpt from “The Passenger.”

Soy-braised tofu with garlic and ginger takes only 20 minutes.

Paul Newman shares self-doubt in his posthumous memoir, “The Extraordinary Life of an Ordinary Man.”

In “Till,” Chinonye Chukwu tells the story of Emmett Till’s life.

The pangrams from yesterday’s Spelling Bee were analogizing and gazillion. Here is today’s puzzle.

P.S. The veteran health journalist Jancee Dunn is joining The Times as a columnist.

“The Daily” is about Herschel Walker.