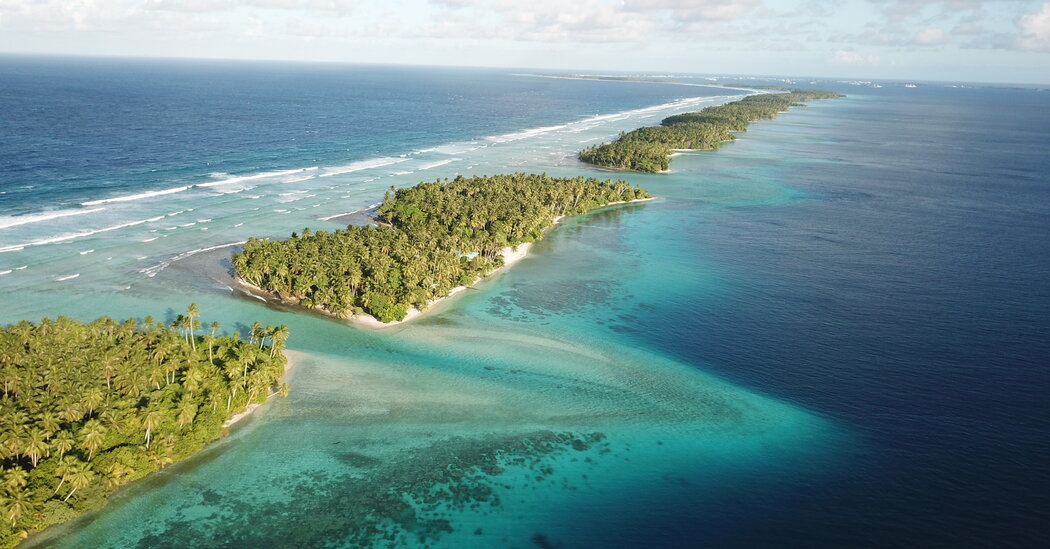 It was one of the last places on the planet to see its first Covid-19 cases. Now the virus is spreading rapidly.

As a remote nation in the Pacific, the Marshall Islands had been almost completely spared from Covid-19, registering just a handful of cases throughout the pandemic, with no community transmission detected.

But in just over a week, more than 4,000 people have tested positive in a population of about 60,000, including the country’s secretary of health and human services, Jack Niedenthal. He has been providing updates on Facebook and said 75 percent of those tested in Majuro, the capital, had Covid, “an incredibly high positivity rate.”

In an interview on Tuesday, Mr. Niedenthal said there was some panic and concern, given that the islands, about halfway between Hawaii and the Philippines, had not recorded a single Covid case last year.

“So people were thinking, ‘Hey, these guys really know what they’re doing,’” he said. “The problem is people started wanting to travel, they missed their loved ones, some leaders traveled.”

As life began to return to normal, keeping the virus out was impossible, he said. Mr. Niedenthal expected the case count to continue rising, given the dense population. “The next three to four days are going to be pretty rough,” he said.

Hundreds of health care workers have been among the infected. At the hospital in Majuro, immunizations were halted because almost the entire team was out, most of the medical record keepers were out, and the housecleaning staff was reduced to one person, he said.

On Aug. 10, Mr. Niedenthal called health care workers back to work even if they tested positive, saying they would be screened and would not interact with patients. He said it was a drastic measure that “has been taken throughout the world and the Pacific as Covid numbers rise quickly and we are left with no other choice.”

Hospitalizations and deaths tend to lag behind case numbers, but as of this week there had been few severe cases, including six deaths.

The population is highly vaccinated: 72 percent are fully vaccinated in Majuro, and 61 percent have boosters, according to government data. The Marshall Islands closed its borders in early March 2020, taking more drastic measures than its neighbors at the time. It was one of the last places on the planet to get its first cases, when two travelers were quarantined in October 2020.

Mr. Niedenthal said the first known cases of the current outbreak were among a group of teenagers who had no travel history or known contact with anyone who had been in quarantine. “So we knew we were in trouble, because they came from a crowded community,” he said.

He said that over the past few days, people have been worried, but that there was a strong sense of community on the islands. “It’s not like panic in the U.S. where everybody is buying toilet paper,” he said.

And unlike early in the pandemic, the islands now have access to Covid treatments, like Paxlovid, an antiviral medication shown to prevent serious Covid cases, sent by the U.S. government. Representatives from the U.S. Centers for Disease Control and Prevention arrived on the island in recent days to assist with the response.

Other governments have pitched in: Taiwan donated thousands of masks, protective gowns and other hygiene products, while American Samoa sent shipments of Paxlovid. The Australian government has provided protective equipment, testing kits, masks and face shields.

Angeline Heine Reimers, a government worker in Majuro, said catching the virus had become almost “unavoidable.” Many people live in multifamily homes, she said, adding that 15 of the 16 people who live in her house had contracted the virus.

“The good thing is that all of us had been vaccinated,” said Ms. Heine Reimers, 46, adding that each of their cases had been mild. Many Marshallese live with comorbidities that place them at higher risk if they are sickened, and the Marshall Islands has one of the highest rates of diabetes in the world, according to data compiled by the World Bank. “Everybody is just really scared,” Ms. Heine Reimers said.

Marie Davis Milne, the mayor of Ebon Atoll, about 240 miles southwest of Majuro, said that the authorities were trying to prevent the spread of the virus by stopping most planes and ships that travel between neighboring islands.

She said that in the past few days, she had volunteered at testing sites on Majuro, where some people had waited under the hot sun for hours. “Even if it rains they don’t move,” Ms. Davis Milne said. “They don’t want to lose their place in line.”

Precious metal meant for Sanjeet, Shiva Thapa puts up with close up beats within...

Every female needs to have Disha app, insists Jagan