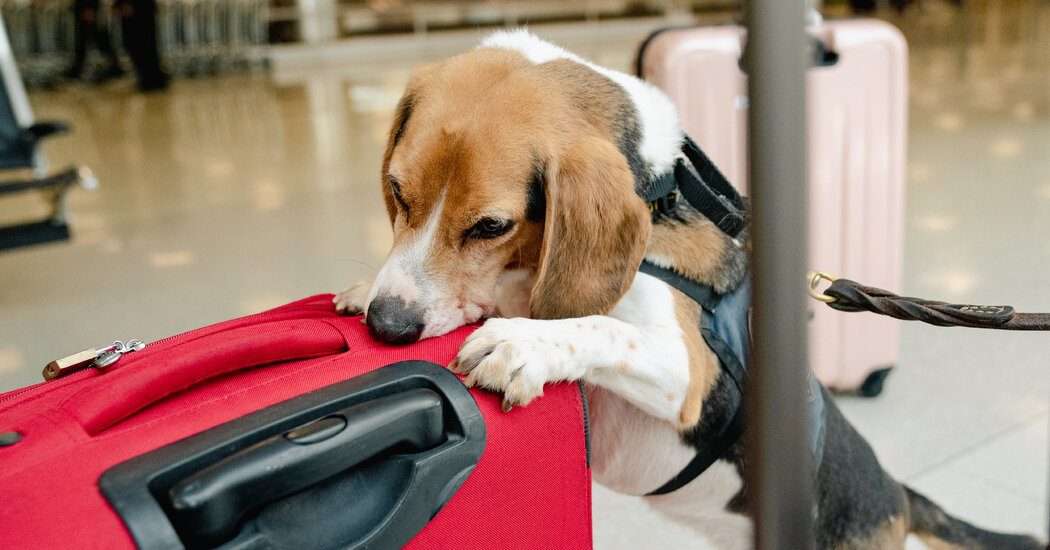 With international travel returning to prepandemic levels, these floppy-eared hounds are sniffing out deadly diseases and pests at border crossings one mango or sausage at a time.

DULLES, Va. — As a throng of travelers at Dulles International Airport elbowed their way to the baggage carousel on a recent sweltering afternoon, a federal officer zeroed in on a tired woman, sniffed her suitcases and sat down.

Hair-E, a six-year veteran at Dulles and a honey-colored beagle, glanced knowingly at his human handler, Don Polliard.

“Do you have any meat or fresh vegetables or fruit in that bag?” Mr. Polliard, an agriculture specialist for Customs and Border Protection, asked the passenger.

Yes, she reluctantly conceded. Contraband, just as Hair-E suspected. As Mr. Polliard instructed the traveler and her husband to take their many bags and go through a secondary round of inspections, Hair-E lurched toward a red plastic bag a carousel away, already following the lure of the next scent.

As a member of the government’s Beagle Brigade, Hair-E is one of 180 hounds deployed at airports, border crossings and postal depots across the country. Clad in blue vests emblazoned with government logos, they roam airport corridors to detect and intercept prohibited foods or plants that could carry diseases and wreak economic and ecological havoc on American agriculture. And with international travel returning to prepandemic levels, Hair-E and his colleagues are seizing an increasing number of goods outlawed from entering American soil.

Typical recruits are young rescues that complete up to 13 weeks of training at a center in Atlanta, where they learn to discern five basic odors: apple, citrus, mango, pork and beef. Their time in the field naturally expands their olfactory repertoire. About three-quarters of the dogs graduate from the program and are then placed at ports of entry. After a few years of service, members of the brigade retire at about 9 or 10 years old, when they are often adopted by their handlers.

Unassuming in size, friendly in nature and renowned for their sense of smell, beagles are preferred to patrol baggage carousels while larger breeds like labradors sniff out docks and cargo facilities.

“Beagles are generally not intimidating at all, and people are usually pretty happy to see them,” said Sara Milbrandt, a regional agricultural canine adviser for Customs and Border Protection who worked as a handler for 15 years.

Of course, few travelers are thrilled when their carefully hidden delicacies are unearthed, even if the detection comes with a wagging tail. But neither the dogs nor their handlers are swiping the confiscated food. Instead, the beagles receive a treat — a pepperoni stick or tiny milk bone, for example — for the discovery, while their handlers are bound by the Agriculture Department’s regulations.

“When you’re taking their $900 prosciutto ham that they bought and were sure that they can bring in, I get why we’re not their favorite person, but I promise we’re not taking it to the back room to eat,” said Christopher Brewer, the Customs and Border Protection agriculture branch chief for airports in the Washington area.

“The dog is one of the layers of defense to prevent the introduction of something harmful to agriculture,” he added.

The Science and Wonders of Smell

Learn more about our often disregarded, and at times startling, superpower.

That harm could be catastrophic.

Currently, the Agriculture Department is prioritizing the detection of African swine fever, a highly contagious and deadly disease not yet present in the United States that risks being transmitted through pork sausages and cured meats smuggled in from abroad.

Another threat is the Medfly, a species of fruit fly considered one of the most dangerous pests in the world and often found in tropical vegetables and fruits like mangos, contraband frequently nestled in the carry-ons of travelers from South Asia in May and June.

On a recent Friday, Hair-E and Phillip, a two-year member of the brigade with golden eyes, patrolled an arrivals bay bustling with European backpackers, reuniting families and passengers returning from the hajj retrieving canisters of holy water from the oversize baggage claim.

Ever the motivated employees, the beagles prefer it this way: every carousel crammed with luggage to sniff.

“They really, really enjoy working,” Ms. Milbrandt said. “You can probably see that just by watching them.”

The Beagle Brigade confiscated more than 96,000 items in the first nine months of the 2022 fiscal year and is on track to surpass the number of seizures made in the previous two years of the pandemic — about 102,000 annually.

At Dulles, outside Washington, Hair-E is the fastest and one of the most industrious dogs at the airport, intercepting 12 to 18 prohibited items a day like bush meat, fresh mangos and homemade goods, according to Josue Ledezma, an agriculture canine supervisor.

When international flights all but halted during the height of the pandemic, keeping the dogs motivated was a challenge, their handlers said. Without a steady stream of suitcases to sniff and contraband to spot, the five beagles stationed at Dulles were assigned to uncover food hidden in vehicles to keep the memory of mangos and pork fresh in their noses.

Certain scents are more enticing than others. Hair-E drools when he has identified meat. Phillip loves the smell of bananas.

Some are the phantom smells of a sandwich or apple eaten long before landing, as the dogs can detect residual odors from food no longer present in a traveler’s bag.

And others still are so strong that even the handlers can smell it, like Phillip’s most recent jackpot: a suitcase stuffed with 22 pounds of raw beef and 33 pounds of raw, smoked goat meat. But Valerie Woo, his handler, is sympathetic to the temptation, even if it is her job to guard against it.

“Some of the passengers come from food-insecure countries or it’s their first international trip and they want to bring everything,” she said. “For others, it’s a piece of home.”

“We were sure they had drugs — clearly, that is not coffee,” he said. “Turned out to be homemade sausages. Grandma made them.”

Asked to rank the canine officers he had worked with, Mr. Polliard demurred. “They’re all good dogs,” he replied.

As the officers recounted their experiences, Phillip rolled around on the floor, mugging for the camera, his colleagues and a reporter gathered around him — “a total drama queen,” as Ms. Woo put it — before coming to an abrupt alert.

His nose wriggled, as he again smelled something in the air.

A ‘Virtual Rapper’ Was Fired. Questions About Art and Tech Remain.

BCCI begins clearing dues of impacted gamers after domestic season was curtailed due to...

Russia’s Unfounded Claims of Secret U.S. Bioweapons Linger On and On