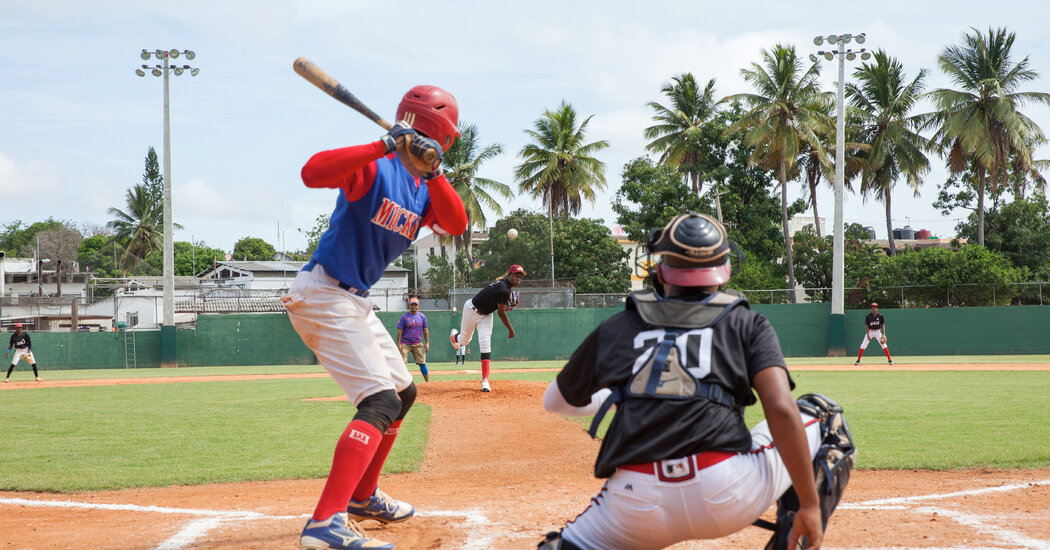 No country would be more affected by an international draft than the Dominican Republic. The players, coaches and trainers there remain divided as the issue comes to a head.

SANTO DOMINGO, Dominican Republic — Like so many children on this baseball-mad island, Fraidel Liriano wanted to sign with a Major League Baseball team and eventually play at the highest level. It could earn him and his family life-changing money.

So at 12, he said he left school and his home in Sabana Grande de Palenque, a municipality southwest of Santo Domingo, to live and train at a private academy east of the country’s capital that produced Rafael Devers, Boston’s star third baseman.

“It was hard,” he said in Spanish, adding later: “You have to take the risk. I liked studying but I also liked baseball and I wanted to follow my dream.”

The bet seemed to pay off when Liriano, a shortstop known for his stout throwing arm and power at the plate, and his trainer, Javier Rodríguez, said they reached a verbal preliminary agreement — a preacuerdo, as it is called here in Spanish — with the Texas Rangers for $1.5 million.

Liriano was 15 at the time, younger than the lowest allowable age (16) in the rules governing the international amateur market. But in the long-running race to find the next great talent, M.L.B. clubs have increasingly — and alarmingly to many critics — been striking these preacuerdos, sometimes with children as young as 12.

Liriano said he understood that there was a risk with an unwritten and unenforceable pact, but he never expected what came next: When it came time to officially sign Liriano, the Rangers did not. Rodríguez said he later learned it was because the Rangers didn’t have any more room in their international signing bonus pool of $5.3 million.

“To promise fulfilling a dream for a kid that has spent his whole life fighting and working to achieve it and at the end to tell them, ‘No, there’s nothing,’ that’s something very frustrating,” Liriano said.

Liriano, who has sued the Rangers, claiming discrimination and breach of contract, said the Rangers never explained why. Citing the pending case, the Rangers declined to comment through a spokesman. But this practice is one of the things that M.L.B. and its players’ union — and many others not formally in either group — hope may be prevented as they debate how to remake how international players enter affiliated baseball.

Monday is the deadline to agree — or not — to creating a first ever international amateur draft. When M.L.B. and the union had their contentious negotiations for a new labor agreement this past off-season, the international draft had to be deferred until now to avoid delaying the regular season. A draft would end international amateur free agency.

“The draft is the best that can happen to the Dominican right now,” Rodríguez said. “The first kid from the 2024 class that reached an agreement is one of mine. But I have a business in this. And if I don’t do it, someone else will.”

M.L.B. effectively offered the union a trade: the introduction of an international draft in 2024, which M.L.B. has long wanted but the union has long resisted, in return for the elimination of the qualifying offer system, which ties draft picks to top free agents, something the union believes has hurt the market value for those players.

The league and the union differ on details and dollar amounts, like, as of Sunday night, $191 million vs. $260 million total for draft-eligible players, according to a person familiar with the negotiations not publicly authorized to discuss them, but they appear set on what would be a draft of 20 rounds. If no deal is struck, the status quo will remain and the collective bargaining agreement will be finalized with no stoppage in play.

While an international draft would affect all countries outside Canada and the United States, the Dominican Republic, as a hub of baseball talent that has produced more players than any country outside the U.S., has been a driving force in the discussion.

“We’ve talked with both sides,” said Junior Noboa, the Dominican Republic’s national baseball commissioner, referring to M.L.B. and the union, the two groups that have spent considerable time on the island talking to players, government officials, trainers, agents and others involved.

“In the end, it’s a decision they’re going to take for the baseball industry,” said Noboa, a former M.L.B. player who serves as an Arizona Diamondbacks executive and owns a private baseball academy. “And with us, we hope that the industry keeps growing and that it’s a business that is clean and is good for the young kids that sign and for the teams that are involved and that are making big investments in all of Latin America, but in a special way in our country.”

The rate of the preacuerdos accelerated, several trainers said, after the 2017 labor agreement that placed hard caps on the international signing bonus pools, which gave teams the ability to know how much they would have to spend in future years.

Jaime Ramos, a trainer who helped catcher Gary Sánchez earn a $3 million signing bonus with the Yankees in 2009, said the rule changes were like lighting a match “and it burned everything.”

A byproduct, several trainers said, was that preacuerdos drove the market younger, making it harder for unsigned players 16 or older to get scouts’ attention or a contract. “If you’re not selling 13- or 14-year-olds, it’s a problem,” Rodríguez said.

Asked for their thoughts on an international draft over the past few months, several M.L.B. players said they wanted to learn more or declined to answer. Several others are against the draft.

“The problem isn’t just the draft; it’s the people,” said Mets shortstop Francisco Lindor, a top union official and a Puerto Rico native, who preferred players choose their teams. “Those are the ones taking advantage. Because with a draft, there will still be people taking large percentages of the bonuses. How do we fix that system?”

Wander Franco, a Dominican shortstop who signed with the Tampa Bay Rays for $3.85 million at 16 — and signed a $182 million extension last year — was against a draft and said one might made it harder for young players to get money sooner to help their families. Still, he added, “The system needs to change because the scouts are looking at 14-year-old kids.”

The preacuerdos are not the only reason players and officials want reform. Despite efforts by M.L.B. to improve the identity verification process or start a trainer program that includes steroid testing, this world is largely unregulated and often informal. Anyone can become a trainer and double as an agent. They do not have to be certified by the union, which oversees agents in the U.S. and caps fees at 5 percent.

M.L.B. has said a draft could help end concerns of malfeasance (such as trainers taking large cuts of players’ bonuses — as much as 50 percent — or striking side deals) and performance-enhancing drugs being given to teenagers in order to land contracts.

Ramon Peña, a former Cleveland Guardians and Mets executive and scout who has signed many M.L.B. standouts from the D.R., said he has come around on a draft after initially opposing it.

“There’s a lot of corruption in scouting,” he said. “It’s among the scouts and the trainers. I think a draft can eliminate that, or part of it.”

Several trainers echoed the comments of Tony Clark, the head of the union, who said in March that the challenges of the current system were “largely associated with those that are cutting the checks.”

The education of Dominican children was also a commonly mentioned concern. It is rare for them to finish secondary school before signing with a M.L.B. club, while domestic amateur players are selected after they finish high school.

“Definitely we need more education,” said Juan Soto, a star outfielder for the Washington Nationals. Added Adrian Beltre, a former star for several teams: “Draft or no draft, the exploitation of young kids, that they’re selling 11- or 12-year-olds, I don’t like that. It’s not correct that you’re taking kids out of school.”

Many people in the D.R. also find ways to take pieces of the players’ bonuses. Some lend money — with interest — to the families of players who have verbal agreements, and thus expect a future payday. Liriano’s family took out loans, Rodríguez said, but the bonus never came. At 18, Liriano remains at Rodríguez’s academy and unsigned.

Although Noboa said the Dominican Republic’s government had no official position, he made a few references in a recent interview to the ways a draft could improve the existing system “a lot” because “you don’t know which organization you’re going to sign with.”

The tenor at La Marina, a public baseball facility in Santo Domingo, on a recent morning was decidedly against the draft. Rafael Báez, whose baseball league has 300 children ranging from 5 to 12, and Franklin Guerrero, one of his trainers, feared that American officials wanted more control over the process, that under-the-table deals would continue, that there is no formal structure like high school baseball. Dominican players, they said, would have fewer opportunities.

“For us, it’s a headache if they put a draft in this country,” Báez said. “First, this country doesn’t have the conditions for a draft. Second, we see what’s happened in Puerto Rico. After they put the draft in Puerto Rico, unfortunately the production of players professionally and in terms of the big leagues fell to the floor.”

Whether a draft is approved or not by Monday, several trainers and officials noted a slowly growing sentiment of support for it one day.

“I’m surprised when I hear many of the principal private academies that sign big players that are in favor of a draft,” Noboa said. “They might have a few questions, which is normal, but I feel like the support is more than existed before.”

Rajkummar Rao on being called ‘star’: Call me Raj, it’s a nice name