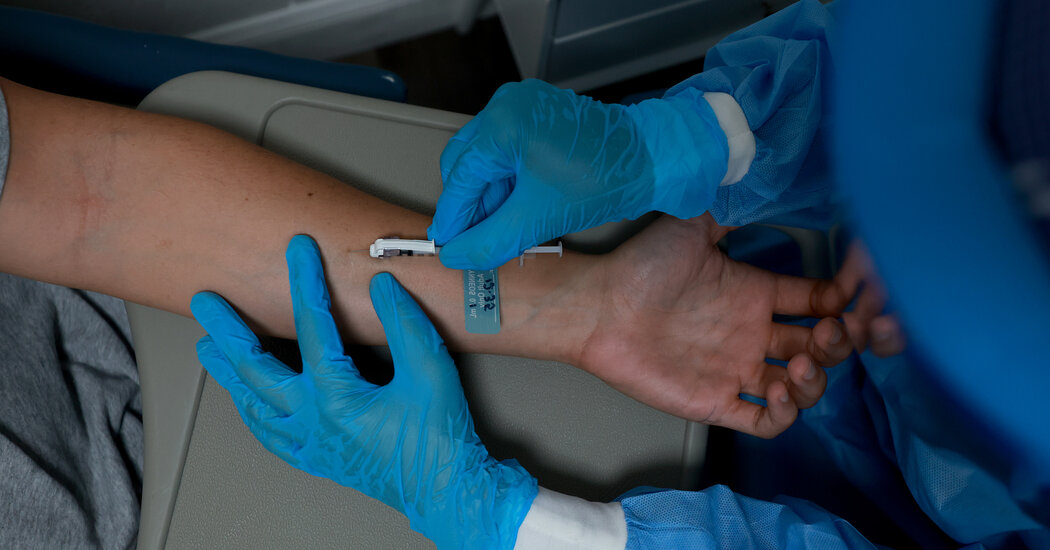 WASHINGTON — The White House, under pressure to contain a growing monkeypox outbreak, announced on Thursday that it was sending 1.8 million vaccine doses to jurisdictions that agree to use a new vaccination protocol, as public health officials prepare for Gay Pride events and the return to college campuses, which they fear could hasten spread of the virus.

The Biden administration has not acquired additional doses of the monkeypox vaccine. Instead, it is trying to stretch the existing stockpile by promoting a different method of administration that uses one-fifth as much per shot. Federal health officials say that is just as effective when injected into the skin instead of a full dose into underlying fat.

The White House plan is an effort to encourage cities and states to switch to the so-called intradermal method. Those that have done so, and used 90 percent of their current supplies of vaccine, will be able to order additional doses beginning on Monday, officials said.

“More shots in arms is how we get the outbreak under control,” Robert J. Fenton Jr., the White House monkeypox response coordinator, told reporters on Thursday.

But not all jurisdictions have switched to intradermal dosing — New York City, the epicenter of the U.S. outbreak, has yet to begin such a change. And the protocol has raised concerns from some scientists, activists and the vaccine’s manufacturer, Bavarian Nordic.

In a letter last week to President Biden’s health secretary, Xavier Becerra, the company expressed “some reservations” about the system, citing “very limited safety data” and concerns that patients might not receive a required second dose. On Thursday, the company said it had reached an agreement with a U.S.-based contract manufacturer to bottle doses of the vaccine, known as Jynneos, which will ease the current shortage.

The administration’s vaccine distribution plan drew criticism from activists, who said that the better response would be to work with cities and states on a more flexible plan for mixed dosing. In that proposed regimen, some shots would be given into the skin — most likely by major health centers that were equipped to do so — and some would be given in the more traditional way, by providers who were not trained or equipped to switch.

“What they are doing now, first and foremost, is unscientific,” said Joseph Osmundson, a virologist at New York University. “To pretend that 100 percent of doses will be given intradermally is incorrect.”

James Krellenstein, a founder of PrEP4All, an advocacy group for H.I.V. patient care, called Thursday’s announcement about the distribution of vaccine doses “a complete accounting trick.” Activists also say the new protocol could exacerbate existing racial disparities and signal to people of color that they might be getting a lesser dose, despite health officials’ approval.

“Once it starts becoming equitable, now it’s not, ‘We’ll give you the dosage that everyone was getting prior,’ it’s, ‘We’ll give you the shorter doses,’” said Jennifer Barnes-Balenciaga, a Black transgender woman who is helping to lead RESPND-MI, an epidemiological study on monkeypox.

What is monkeypox? Monkeypox is a virus similar to smallpox, but symptoms are less severe. It was discovered in 1958, after outbreaks occurred in monkeys kept for research. The virus was primarily found in parts of Central and West Africa, but recently it has spread to dozens of countries and infected tens of thousands of people, overwhelmingly men who have sex with men.

Who can get the vaccine? Jynneos vaccine is most commonly used to prevent monkeypox infections, and consists of two doses given four weeks apart. It has mostly been offered to health care workers and people who have had a confirmed or suspected exposure due to limited supplies, though new doses should become available in the coming months. A few states, including New York, have also made vaccines available among higher-risk populations.

Officials also said they would distribute 50,000 doses of Tpoxx, an antiviral medication used to treat monkeypox, to cities and states so that providers would have the treatments readily available. Doctors and patients have complained that Tpoxx has been difficult to access — and that many patients were not getting it until more than a week after the onset of symptoms.

Last week, after an article in The New York Times detailed the difficulties doctors and patients faced in acquiring the drug, Rep. Carolyn B. Maloney, chair of the Committee on Oversight and Reform, urged Mr. Becerra to make the drug more easily accessible.

Thursday’s announcements came as the nation has recorded more than 13,000 cases of monkeypox, an infectious disease that can be extremely painful, though only rarely fatal, and has been spread primarily among men who have sex with men.

There are concerns that upcoming events could further fuel outbreaks.

Universities and colleges are preparing to deal with monkeypox as students return, amid concern that the virus could spread in dorms or at parties. Two big Pride events — Black Pride in Atlanta and Southern Decadence in New Orleans — are scheduled for Labor Day weekend.

On Wednesday, the organizers of Southern Decadence in New Orleans, one of the country’s biggest Pride celebrations, announced they were canceling Bourbon Street Extravaganza, a free concert, over concerns about monkeypox.

Dr. Rochelle Walensky, director of the Centers for Disease Control and Prevention, said the administration would provide messaging guidance to colleges and universities, and would work with local officials to administer vaccine shots at major events. She made clear the government is not trying to discourage attendance from celebrations of gay life.

“These events are important opportunities for people to connect with their community and to enjoy themselves,” Dr. Walensky said. “And they’re also a chance to provide public health messages and resources to otherwise hard to reach populations.”

The New York Times reported earlier this month that the shortage of the Jynneos vaccine was in part because the Department of Health and Human Services failed early on to ask that bulk stocks of the vaccine be bottled for distribution. Bavarian Nordic said the agreement it announced Thursday, with Grand River Aseptic Manufacturing, would “expedite delivery of vials to the U.S. while also freeing up capacity for other countries.”

Gay rights activists have been extremely critical of the administration’s response, particularly when it involves vaccination, as have state and local health officials, who say the vaccine rollout has been confusing and inefficient.

In New York City, Dr. Ashwin Vasan, the health commissioner, said in an interview on Thursday that more time was needed to train people in the method and to speak with community partners about the switch. He also cited equity concerns, saying that providers at community health organizations might be less likely to be trained in the method, and some people might be less willing to get the one-fifth dose.

“I think everyone’s under pressure,” Dr. Vasan said. “I think every jurisdiction is feeling like this is a fast switch. It’s been done quickly. And I hope that our partners will understand that especially in the biggest, most complex city in the country, with the one of the most complex delivery systems in the country, we’re going to take our time and get this right.”

There is limited data on whether Jynneos is safe and effective. The vaccine was approved at its current dose based on small studies showing that it appears to produce an immune response comparable to that of an older smallpox vaccine. Even less evidence supports the use of one-fifth intradermal doses of Jynneos to prevent monkeypox.

Only one study has been conducted directly on intradermal dosing of Jynneos, and while it did not note a decrease in efficacy, it noted more localized side effects like swelling and redness. Dr. Peter Hotez, a vaccine expert at the Baylor School of Medicine in Houston, said he would have preferred the government to do an additional pilot study on intradermal dosing before switching vaccination strategies midstream.

“Collect more data on a few thousand individuals, not only for the immunological parameters, but safety, to confirm the safety effects are not worse than we thought,” he said. But overall, he felt intradermal dosing was an “innovative approach” to address the problem of supply.

The approach has been used to stretch vaccine supply for other diseases, according to Dr. Bruce Weniger, an expert on the intradermal technique and a former C.D.C. scientist. In a public health emergency, he said, officials must make recommendations based on what seems plausible from prior evidence and experience, limited as they might be.

“Avoiding recommendations because there’s no perfectly apposite data is a cop-out,” he added. “On the other hand, easily and quickly performed clinical trials could indicate” how well a one-fifth dose would match up against the full dose.

Federal scientists had been poised to start just such a trial in the fall, but the shortfall of vaccine doses pushed the administration to move ahead without those results.