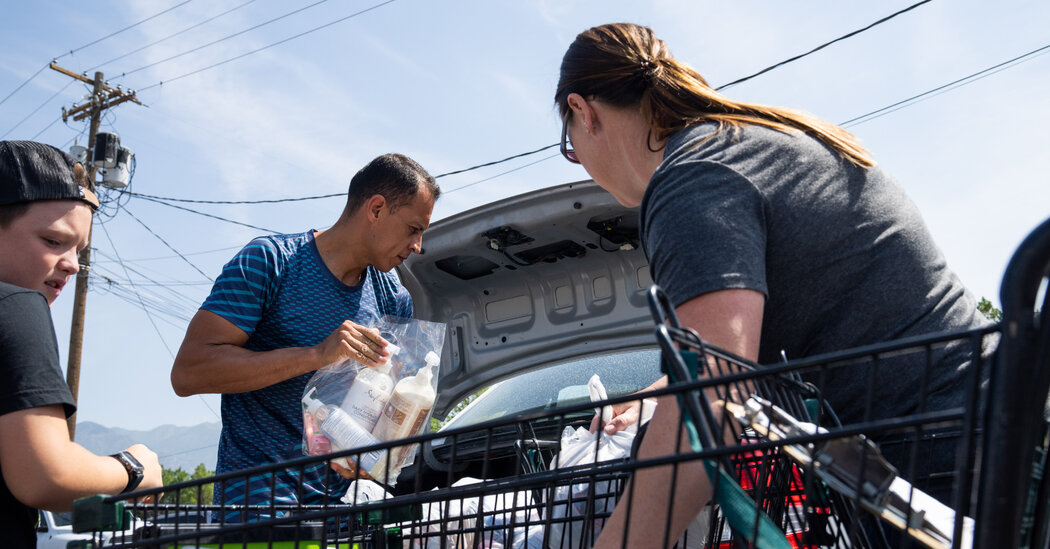 The director of the nation’s largest network of food banks is seeing support dwindle as need rises: “You’re in the middle of a battle, and people are leaving the field.”

The first time Kelly Wilcox drove her 2017 Dodge Grand Caravan to the food pantry near her home in Payson, Utah, she noticed one thing right away that surprised her: newer models of Toyota and Honda sedans and minivans. “I saw a bunch of other people with cars like mine, who had kids in cars,” she said.

The mother of four young sons hadn’t known what to expect when she made that initial trip to Tabitha’s Way Local Food Pantry this spring. She did know she needed help. Her husband had lost his job. He soon found a new job as an account manager, but with inflation it hasn’t been enough. “We still cannot keep up with the bills,” said Ms. Wilcox, 35. To keep her children fed this summer, she has visited the pantry regularly and said that barring a change, like a drop in food prices or a raise for her husband, it will be necessary for the foreseeable future.

Tabitha’s Way’s location in Spanish Fork, Utah, a town of about 44,000 outside Provo, used to serve roughly 130 families each week, offering essentials like fresh produce and baby formula. This year — serving people like Ms. Wilcox and her family, whose paychecks are not going far enough — that number has climbed above 200.

The increase in food insecurity is not about a sudden wave of joblessness as it was when the economy ground to a halt in 2020 in the first wave of the pandemic. It is about inflation — higher prices for housing, gas and especially food. According to the last report on consumer prices, the cost of food increased 10.4 percent from a year earlier, the largest 12-month increase since 1981.

Food banks are trying to meet these needs while coping with decreasing donations and, in some cases, increased awareness among people who need help that food banks are an option.

Data from the Census Bureau showed that last month, 25 million adults sometimes had not had enough to eat in the previous seven days. That was the greatest number since just before Christmas in 2020, when the pandemic continued to take a high economic toll and the unemployment rate was nearly twice what it is today.

A survey conducted by the Urban Institute found that food insecurity, after falling sharply in 2021, rose to roughly the same level this June and July as it reached in March and April 2020: Around one in five adults reported experiencing food insecurity in the previous 30 days. Among adults with jobs, 17.3 percent said they had experienced food insecurity, compared with 16.3 percent in 2020. (The most recent survey had 9,494 respondents and a margin of error of 1.2 percentage points.)

On a local level, those trends are reflected in what Wendy Osborne, the director of Tabitha’s Way, sees in Utah. “There are more people who have jobs, they’re working, they’re just not making enough,” she said.

Ms. Osborne said the majority of families that picked up food from Tabitha’s Way were employed with one or more jobs. “I repeatedly hear: ‘I’ve never had to use a food pantry. I’m the one who’s helped people, not the one who needed help,’” she said.

Lines of thousands of cars outside food banks and food pantries were among the iconic images of the first phase of the pandemic, when the economy contracted after nationwide shutdowns. The federal government helped with extra funds and extra food. Individual donors gave money.

“There was a big charitable response at the beginning. There was a very robust government response as well,” said Elaine Waxman, an expert on food insecurity and federal nutrition programs at the Urban Institute in Washington. But the end of enhanced unemployment, stimulus checks and monthly child tax credit payments, combined with inflation, means that problems are starting to crop up again. This time donations are down just as the need is rising again.

“We’re good in a crisis. We rise to the occasion,” Ms. Waxman said. “But we don’t know what to do if the crisis persists.”

Feeding America, the largest network of food banks in the country, which helps supply the smaller frontline pantries where customers pick up food, said 65 percent of member organizations surveyed had reported an increase from May to June in the number of people served. Just 5 percent reported a decline.

At the same time, cash donations, a huge help at the start of the pandemic, are down. In the first quarter of the year, revenue for the national office fell nearly a third from a year earlier, to $107 million from $151 million.

“You’re in the middle of a battle, and people are leaving the field,” Claire Babineaux-Fontenot, the chief executive of Feeding America, said in an interview. On visits to food banks, she said, “I walk into freezers that don’t have very much food in them.”

Feeding America’s network includes 200 food banks and 60,000 food pantries and meal programs. Over the four months for which data is most recently available, February to May, 73 percent of Feeding America’s food banks surveyed said food donations were down, with 94 percent saying the cost of food purchases had increased and 89 percent saying they were paying more for transportation to acquire or deliver food.

Through the first three quarters of the 2022 fiscal year, Feeding America said, it received 1.14 billion pounds of food from federal commodities programs, compared with 2.46 billion pounds a year earlier.

The manifold pressures on the emergency food systems are evident at Tabitha’s Way. In the first half of 2022, food drive donations fell nearly two-thirds compared with the same period last year. Donations of food from grocery stores and restaurants were less than a quarter of what they were the year before. Cash donations dropped to less than $700,000 from nearly $1.1 million.

Just like consumers, the pantry is spending more on the food it buys. Fuel to pick up donated food is costing more, even if down slightly from recent highs. And with unemployment at 2 percent in Utah, the labor costs for drivers and skilled staff have gone up, too. Ms. Osborne said the average wage for her staff was $20 or more per hour, up from $16 a year ago. “We don’t want our employees being food insecure, too,” she said.

“There was a lot of attention nationally during Covid, rightly so, but sadly things haven’t changed and unfortunately are trending worse right now, especially with all the inflation,” Ms. Osborne said.

Those long lines at food banks at the start of the pandemic, and the cataclysm for everyone all at once, may have also done something to shake off some of the persistent stigma around emergency food systems.

“I thought it would be a whole bunch of off-brand foods or prepared meals,” said Antazha Boysaw, 24, a certified nursing assistant at a retirement home in the Hartford, Conn., area. Instead, the mother of two young children found her local food pantries offering squash, shrimp and brown rice.

“​​You can eat luxury meals from the food pantry,” Ms. Boysaw said. “It’s not like you’re going to get the bare minimum of the leftover, expired things.”

She started going to a food pantry in 2021 after she learned that her income was too high to qualify for SNAP benefits, sometimes called food stamps, yet she still needed assistance to feed her children.

“I had my hat on, a big sweater — I didn’t want anyone to see me,” she said of the first time she went to a food pantry.

Now, as inflation continues to drive up prices, she has come to rely on food assistance for healthy meals — and is encouraging others in need to seek help, too.

Ms. Boysaw began posting TikTok videos about her positive experience. She would tell a friend: “Do not be afraid, girl — get your food! Make sure you go with your ID.”

Other first-time pantry-goers made it through the height of pandemic shutdowns without needing this kind of assistance, but are finding inflation harder to navigate. Iliana Lebron-Cruz, 44, a health coach who also works for a dog retreat, lives an hour west of Seattle with her husband, a supervisor at Costco, and their three children. They have a combined household income of around $120,000. “We live pretty much paycheck to paycheck,” she said.

Recently, Ms. Lebron-Cruz found herself looking up options for free food in her area after she unexpectedly spent hundreds of dollars traveling to Oregon after a family emergency.

When she got back home after that trip, she looked at her empty fridge. “I get paid Thursday. It’s Tuesday. I don’t have it,” she said she had realized. She called a food pantry.

“If something pops up with the way inflation is, it’s kind of like a double whammy,” she said. “Six months ago, had the same thing occurred, it wouldn’t have been as bad,” she said.

As Ms. Lebron-Cruz put it on a TikTok video that has been viewed more than 390,000 times: “Break the stigma — no need to be embarrassed friends!!!!!” She said she had received some negative responses to the video, but had also heard from moms who were in need.

“I’m like, absolutely, go feed your babies,” she said.

The Biggest Drip on the rise

Arijit Singh turns composer with Pagglait: Honoured to serve music to the world