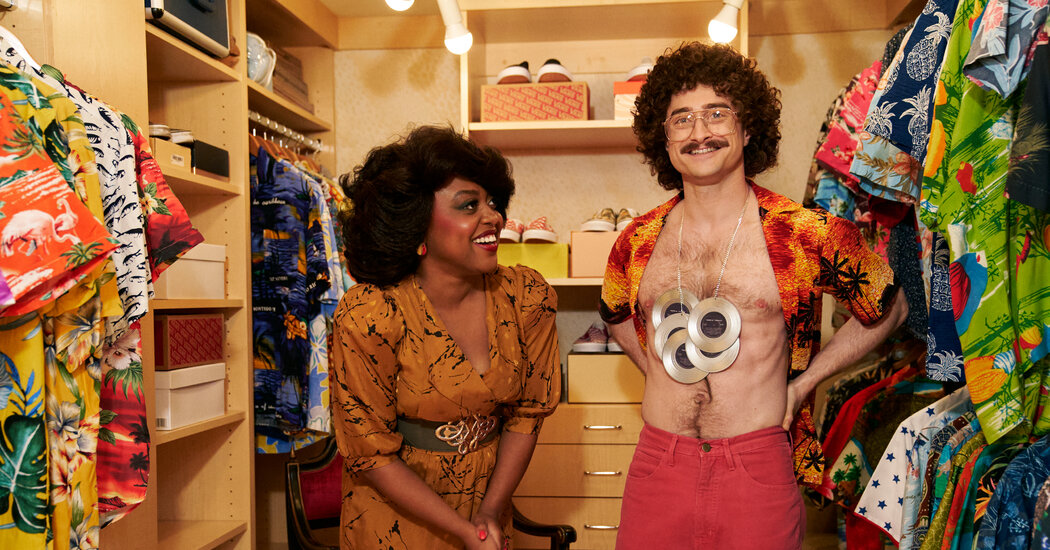 The streaming media device company wants to attract more viewers and advertisers to its channel. A coming biopic of “Weird Al” Yankovic is its most ambitious project to date.

The gray, rainy weather of an early March day was no match for the joy emanating from a rented bungalow on the campus of the California State Polytechnic University in Pomona.

Accordion music wafted over a production set that was tucked into a tree-lined street and teeming with crew members wearing Hawaiian shirts. Welcome to the set of “Weird: The Al Yankovic Story,” the unconventional biopic of the beloved parodist “Weird Al” Yankovic, featuring Daniel Radcliffe in the titular role.

It was Mr. Radcliffe’s last day shooting — and Julianne Nicholson stood in front of the camera portraying Mr. Yankovic’s mother, a woman much more interested in discussing her son’s dietary issues than his burgeoning career. In the scene, Al has called to tell her he just landed a 25-night residency at Madison Square Garden. (Mr. Yankovic never actually landed a 25-night engagement at the arena.) She wants to know if he’s eating enough bran.

“The script is kind of ridiculous,” said Mr. Yankovic, who is a co-writer on the film. He was reluctant to reveal plot details but appeared giddy about the whole experience. “It’s just fun having these top-notch actors doing this silly material,” he said. “I just can’t believe that we’re actually getting to do this.”

The reason the film exists is Roku, the streaming media device company with more than 63 million active accounts in the United States. In the past year, Roku has moved into original programming, acquiring the library of the short-lived Quibi app and paying $97.8 million in cash for This Old House Ventures, the company behind the long-running home improvement show.

Roku Originals has since made a two-hour movie adaptation of the canceled NBC show “Zoey’s Extraordinary Playlist,” greenlit second seasons of Quibi content, like Kevin Hart’s action-comedy show “Die Hart,” and the odd home renovation show “Murder House Flip,” where notorious crime scenes are turned into sparkly remodels. It has also signed deals with Martha Stewart, Emeril Lagasse and Jessica Alba for unscripted content and is planning a broadcast next month of a live-captured performance from London’s West End of “Heathers: The Musical.”

“Weird” is the company’s most ambitious programming move. The film, produced by the comedy studio Funny or Die, cost around $12 million to make. “Weird” will debut at the Toronto International Film Festival in September, before becoming free on Roku in November.

“I can’t say there was a bidding war,” Mr. Yankovic said with a laugh, before adding that other parties were interested. “Roku was the only company that whipped out their checkbook. Because of them, this movie is getting made.”

The film is part of Roku’s effort to persuade those who use the device to access paid apps like Netflix and Disney+ to spend more time perusing the free content offered on the Roku Channel, which now includes 40,000 movies and television shows and 150 linear channels. Keeping viewers on the platform longer is a way to bolster its advertising revenue for a business that has come to rely more heavily on ad spending and content distribution than device sales. Currently, device sales contribute just 12 percent to the company’s bottom line. Keeping users on the Roku Channel is imperative to its success.

David Eilenberg, Roku’s head of originals, said in an interview that the company’s strategy in this early phase of creating new content was to assure the creative community that when Roku takes on a new project, it will be willing to spend the money to support it properly.

“The spending strategy has always been surprise and delight rather than shock and awe,” he said. “‘Weird’ is a nice indicator of that, which is the sort of the thing nobody knew they wanted until it existed. That’s a very tricky thing to commission, but when you get one of those, you put both arms around it and support it to the best of your ability.”

Roku became a trending topic on Twitter at the end of July when it released the trailer for “Weird” as part of its upfront presentation, which the company says resulted in $1 billion in commitments from the seven major advertising agency holding companies for the upcoming television season.

Yet Roku’s expansion into originals comes at a difficult time for the company. During its second-quarter earnings call last month, the company pulled its full-year guidance because of the challenging advertising environment and lowered its third-quarter estimates to only 3 percent growth in total net revenues. (The analyst firm MoffettNathanson previously estimated growth for that quarter could reach 29 percent.)

The company has sought to assure investors that it won’t be laying off employees or changing its business strategy as it deals with the advertising slowdown. That hasn’t stopped some analysts from lowering their price targets for the stock, but most remain bullish on the company’s future as the connected television market continues to grow and consumers are increasingly interested in finding all their different streaming channels in one place (much like traditional cable).

MoffettNathanson detailed the challenges facing the company in a recent investor note, calling Roku’s hurdles a “three-sided war.” On the connected TV side, Roku is fighting against Amazon, Alphabet and others. For audience, it is up against “nearly every streaming platform under the sun.” And for advertising dollars, its competitors now include Netflix, Disney, Amazon, YouTube, Warner Bros. Discovery and Paramount Global.

“Obviously this is not an ideal market structure,” the firm said in the report.

For Rob Holmes, the head of the Roku Channel, the strategy has always been to rely primarily on licensing content with a smattering of new originals — the company has yet to find another project with “Weird”-level enthusiasm — to pique consumers’ interests. It recently announced the revival of ABC’s “The Great American Baking Show,” with Ellie Kemper (“Unbreakable Kimmy Schmidt”) and Zach Cherry (“Severance”) set to host. The show, which will bow in 2023, is intended as a companion to all 12 seasons of the long-running “The Great British Baking Show,” which will become available on the Roku Channel at the end of this year.

Reports suggest that the annual amount the company spends on content is $1 billion, far beneath Netflix’s $17 billion content budget or the $30 billion Disney will spend across all its divisions for 2022. (Roku declined to confirm its annual budget.)

“One of the things about ad-supported streaming versus SVOD is if I watch one thing on SVOD, that month I still sign up and pay,” said Mr. Holmes, referring to subscription video on demand services like Netflix and Disney+. “But from an AVOD standpoint” — that’s advertising video on demand — “you need that engagement to generate that volume that allows you to support that advertising business.”

Complicating matters is the fact that Roku’s competitors are also its partners. Mr. Eilenberg admitted that when he is pursuing new content his primary competitors are often other advertising VOD services like Amazon’s Freevee, Fox’s Tubi and Paramount’s Pluto. But there’s significant overlap: The Roku Channel is available on Amazon Fire devices, for example, while Tubi is a popular channel on Roku. Paramount+ will be joining the Roku Channel later this month.

But Roku can also find itself competing against Netflix. What’s the pitch when facing such a behemoth, albeit one that’s been knocked down a bit recently?

“The very fact that we’re actually not doing a zillion shows, allows us to sort of credibly say to creators, ‘Your show will have its day in the sun,’” Mr. Eilenberg said. “There’s only one Roku Originals slate. Creators are going to be attended to.”

“I think we’re sort of like — what’s the saying? — a big fish,” he said. “We’re not going to get lost in somebody’s lineup. They’re very invested in having this be successful, as we all are. It’s nice that we’re all on the same team.”

Albuquerque Welcomed Muslims. Then Four of Them Were Killed.

Roohi director Hardik Mehta says, ‘In our universe, the chudail is filmy’

He’s Baseball’s Only Mud Supplier. It’s a Job He May Soon Lose.