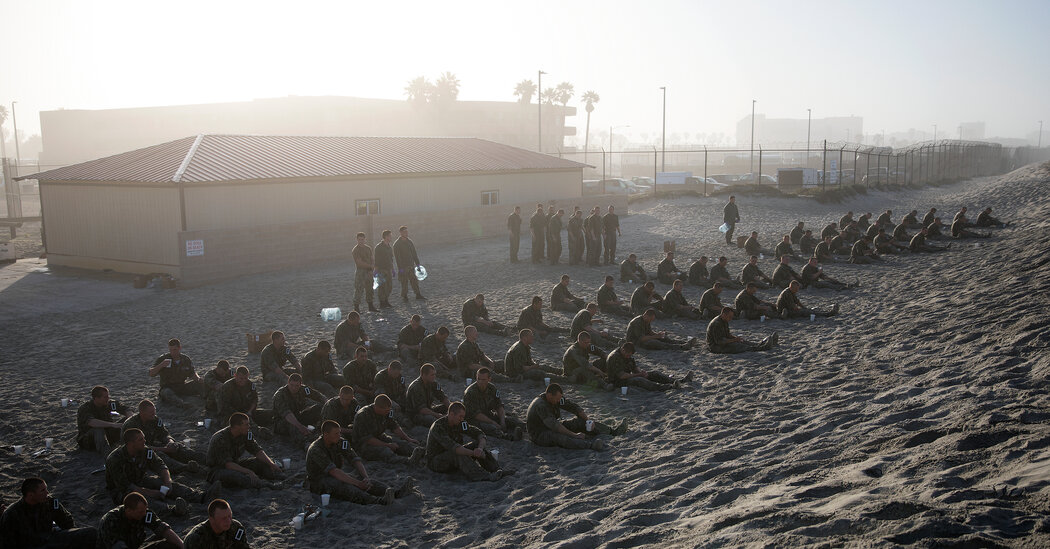 Seaman Kyle Mullen’s death a few hours after completing the brutal Hell Week portion of the SEALs’ selection course raised broad concerns about how the course is run.

Navy SEAL candidates tried multiple times during the elite force’s punishing Hell Week training to get help for a fellow candidate who was suffering from pneumonia and whose heart stopped a few hours after Hell Week was over, but they were repeatedly rebuffed by instructors and medical staff, according to a new Navy report on the sailor’s death.

The report, issued by Naval Special Warfare on Wednesday, more than eight months after Seaman Kyle Mullen died at the SEAL training base in Coronado, Calif., was ordered to determine whether he died while performing his duties as a sailor. It found that he had.

His death, after days of struggling with breathing problems, raised broad concerns about how the SEALs’ selection course, known as Basic Underwater Demolition/SEAL training, or BUD/S, was run, including reports of abusive instructors, drug use and substandard medical care. Hell Week is part of BUD/S.

A second investigation ordered by top Navy leaders to look more broadly at issues surrounding the selection course is expected later this fall.

The Navy has already begun to clean house. According to a Navy spokesman, Cmdr. Ben Tisdale, the Navy has taken administrative action against the two top officers at the SEAL training base at Coronado, as well as the doctor in charge of medical care there. Administrative actions can range from benign letters of instruction to punitive admonishments that can effectively end officers’ careers. Commander Tisdale said that regulations prohibited him from detailing what actions were taken.

Though the new report’s formal findings were limited to whether Seaman Mullen died performing his official duties, a determination that can have implications for the benefits provided to his family, the report included hundreds of pages of supporting documents, including interviews with medical staff members and SEAL candidates that, for the first time, detail what they saw. Those documents paint a picture of a medical staff that failed to help a sailor who had been struggling for days, even when other sailors repeatedly warned that his situation was growing dire.

At times, the accounts in the report from medical staff members and candidates read as if they describe two different events. Medical staff members told Navy criminal investigators that Seaman Mullen appeared to be fine in routine medical checks, and complained only of minor knee pain, during the five-day maelstrom of sleep deprivation, hypothermia and physical exhaustion known as Hell Week. They said he passed a brief medical exam with no issues at the end of the week, and then went to rest.

Five SEAL candidates, however, told investigators that Seaman Mullen was clearly suffering long before his death, and they became alarmed when he began wheezing and coughing up large amounts of brown fluid. One student with training as a paramedic told investigators that he tried to take Seaman Mullen to get medical help halfway through Hell Week, but was told by an instructor to turn around and go back to training.

By the last day of Hell Week, candidates told Navy investigators, Seaman Mullen was barely coherent and so swollen that one sailor said he looked “like the Michelin Man.” That day, the oxygen in Seaman Mullen’s blood reached dangerously low levels, and the medical staff gave him supplemental oxygen, according to the report.

A few hours later, at the end of Hell Week, medical staff said he was fine, but he left the medical exam in a wheelchair, too sick to walk.

The medical staff gave the sailors a written briefing a short time after that, instructing them in capital letters not to seek outside medical help, because it could jeopardize their training. After the briefing, the staff members went home, leaving the base medical clinic empty, the report said. Seaman Mullen died a few hours later.

The details of Seaman Mullen’s struggle echo what many sailors say they have experienced in recent years at BUD/S. In interviews with The New York Times, nearly two dozen sailors said the brutal training course left them with significant injuries and illnesses, including broken arms, broken legs, a broken back, serious concussions, debilitating pneumonia and a potentially fatal condition called rhabdomyolysis, but they were denied medical care and told they would have to quit the course before they could see a doctor.

The sailors asked not to be named because they are still in the Navy, and are not authorized to speak publicly.

The former SEAL candidates interviewed by The Times said that drugs were common in BUD/S, and that many sailors saw them as the only way to get through the grueling course. They see Seaman Mullen’s death and the proliferation of drug use as symptoms of larger problems with a course that became so savagely intense that it injured many sailors but often did not give them access to medical care.

Instructors routinely treated requests for medical care as a sign of weakness, the former candidates said. Asking to see a medic could mark a sailor for extra punishment and doom him to failure, they added. Six said they were told directly that they could not be seen by a medic for injuries; they soon quit the course. Two said they saw a SEAL instructor kick an injured sailor’s crutches away and tell him that he was not really injured. Unable to walk, the sailor quit, the two said.

Nearly all of the candidates interviewed said BUD/S medics, whose job was to step in when candidates were hurt, instead often embraced the mind-set of SEAL instructors, verbally abused candidates and refused to let them to go to the on-site medical clinic.

A Navy spokesman declined to comment on the record about the candidates’ accounts of abuses at BUD/S.

Earlier this month, the new commander of Naval Special Warfare, Rear Adm. Keith B. Davids, warned the SEAL community that abuses would not be tolerated, telling all personnel in an email, “If standards are broken due to negligence, willful incompetence, recklessness, or blatant disregard to safety and the well-being of our teammates, we must ensure appropriate corrective action is taken.”

BUD/S has always been one of the most physically punishing selection courses in the military, but starting in 2021, for reasons the Navy has not identified, it became much harder. Fewer than 8 percent of Seaman Mullen’s class passed the course, compared with about 30 percent historically.

The candidates interviewed by The Times said a key factor was injuries and sickness that went untreated or were overtly punished. They said it was not unusual for instructors to single out injured candidates and have the rest of the class harass them until they quit.

Around the time the graduation rate dropped, the percentage of injured candidates who were given a chance to heal and try again — a process known as a medical roll — decreased sharply according to Navy data, while the number of sailors who quit voluntarily doubled. Candidates said the change was driven by injured sailors who were forced to quit.

As Seaman Mullen’s lungs filled with fluid toward the end of Hell Week, he said little to the medical staff, fearing that speaking up would keep him from becoming a SEAL, candidates told Navy investigators. After Hell Week was over, other sailors became so concerned about him that they twice called the on-duty medical officer. According to interviews, the officer told them they were free to call 911 for civilian medical help if Seaman Mullen wanted it, but warned that being hospitalized could jeopardize his training. Twice, Seaman Mullen declined to let them call 911 for him.

One sailor told investigators that he thought Seaman Mullen, who had not slept in days, was in no condition to make the decision.

It was not the only call for help the medical staff deflected that day. According to the report, one candidate whose name was redacted by the Navy reported to the duty officer that he could not breathe, and was told “he was ‘fine’ and should go back to sleep.” When he replied, “I am not OK” and “I can’t breathe,” he was told to wait an hour and see if it became better, the report said. That candidate ended up hospitalized and on a ventilator.

Kajol looks back at ‘Devi’ as short film turns one