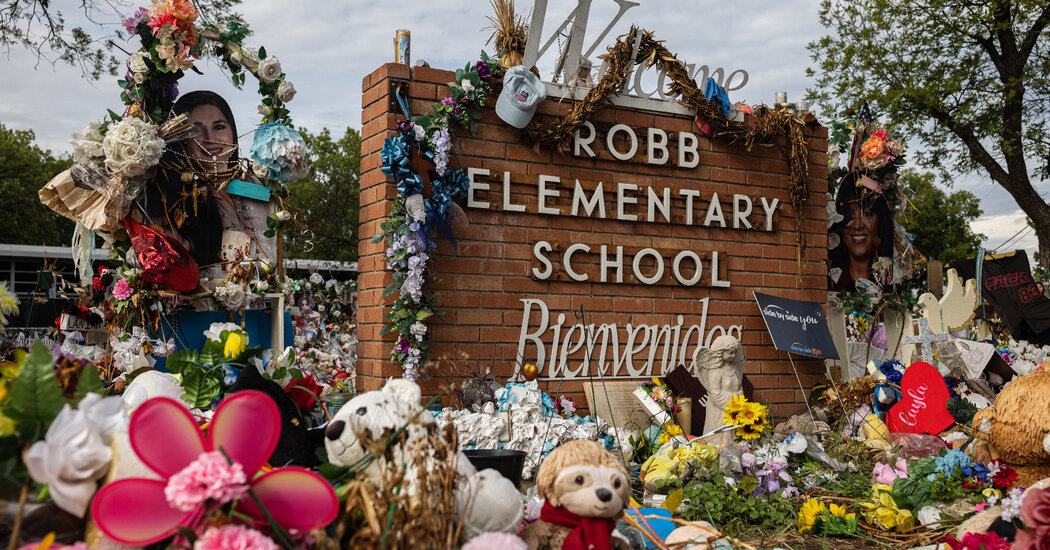 The Department of Public Safety moved to fire a sergeant, and a captain is under investigation for his role in the response at Robb Elementary.

HOUSTON — When gunfire erupted at Robb Elementary School, Capt. Joel Betancourt of the Texas state police rushed toward the scene in the city of Uvalde from the border town several miles away where he was working that spring day.

He quickly called the mayor and the chief of police, according to cellphone records obtained by The New York Times. The captain later told investigators he had been told that the gunman was barricaded inside the school, according to a person with knowledge of the investigation.

Acting on that information, the person said, Captain Betancourt told state police officers at the school to remain outside and establish a perimeter, rather than rushing inside, as police protocol for active shooters would have dictated.

It was not immediately clear when that message was conveyed during the more than hourlong response.

But Captain Betancourt’s actions are now the subject of an internal investigation by the Texas Department of Public Safety into its own officers’ handling of the May 24 school shooting, one that includes at least six other state police officers.

On Friday, the department issued termination papers to one of the officers, Sgt. Juan Maldonado, according to two people briefed on the decision. Sergeant Maldonado was one of the first officers to arrive at the school, but could be seen on body camera video staying in a doorway to the school instead of heading toward the gunfire inside.

Sergeant Maldonado, a public information officer, was being terminated as a result of his actions or inaction on May 24, according to one of the people who was briefed by a top-ranking department official. The sergeant did not respond to a request for comment.

The department is set to discuss the Uvalde response at a meeting of its state oversight board, the Public Safety Commission, this Thursday.

For months, scrutiny of the law enforcement response had centered on the local police, particularly the actions of Pete Arredondo, who during the shooting was the head of the small police force responsible for Uvalde’s schools and, on paper, was meant to be the incident commander during a school shooting.

Briefing state lawmakers at a hearing in June, the director of the state police, Steven McCraw, described Mr. Arredondo as “the only thing stopping the hallway of dedicated officers from entering” the classrooms where the gunman was holed up. Mr. Arredondo was fired over the summer. The rest of the campus Police Department was suspended this month.

But questions have also emerged over the role of the Department of Public Safety in the protracted police response to the May 24 shooting, in which 19 children and two teachers died.

A visual investigation by The Times found delays by officers from several different agencies, including the federal Border Patrol and the Texas Department of Public Safety.

The department had 91 officers respond to the school that day, and its Texas Rangers are leading the investigation into both the shooting and the police response, which Mr. McCraw has called an “abject failure.”

The department’s separate internal investigation, conducted by its inspector general, has appeared to focus mainly on the officers who were physically present at the school and not on decisions that may have been made by senior leaders in Austin.

“We’ve been saying all along that D.P.S. is lying to the community,” said State Senator Roland Gutierrez, citing Mr. McCraw’s comments, days after the shooting, that blamed Mr. Arredondo and laid out what was becoming a shifting narrative around other facts, such as the unlocked door through which the gunman entered the school.

The slow revelation of problems with the chaotic police response — which a State House committee described as a “systemic failure” — has repeatedly revived and added to the misery of Uvalde families still coping with their loss.

“It’s upsetting. It’s disheartening,” said Jesse Rizo, whose niece, Jackie Cazares, 9, was killed in the shooting. “Every time something like this comes out, it doesn’t shock us anymore, but you think to yourself, ‘What else went wrong?’”

Captain Betancourt was seen as a rising star within the Department of Public Safety, and a key part of Gov. Greg Abbott’s push to involve state police in law enforcement around the border with Mexico as part of his broader Operation Lone Star mission.

“To me, he’s an outstanding officer,” said Sheriff Tom Schmerber of Maverick County, along the border, who worked with Captain Betancourt. “He’s always helping the sheriffs.”

Captain Betancourt’s work on the border security operation, crisscrossing the region for meetings with landowners and local law enforcement, made him among the department’s highest paid members, earning more than $160,000 in overtime on top of his annual salary of $120,000, according to two people with knowledge of the operation.

He became a familiar face around Uvalde as well, meeting regularly in recent months with Sheriff Ruben Nolasco and the district attorney, including shortly before the shooting at Robb Elementary.

The gunman began firing inside the school at 11:33 a.m. with a legally purchased AR-15 rifle. Captain Betancourt did not arrive at the school until around 12:30 p.m. or later, Mr. McCraw said in an interview with The Times this month. He was among the most senior D.P.S. officers to arrive at the scene before a tactical team made up mostly of federal border agents killed the gunman at 12:50 p.m.

It is not clear what role his order to officers to hold back and establish a perimeter around the school had on the delayed response: Some D.P.S. officers entered the school, though none stormed the classroom.

Once he arrived at the school, however, Captain Betancourt issued another command, according to an audio recording from the scene published by CNN. This one was apparently directed to an ad hoc group of agents and a sheriff’s deputy who were finally entering the classrooms to confront the gunman. One of the officers — equipped with an earpiece and small microphone — heard over the radio a voice telling them not to breach the classroom doors.

“Hey, this is D.P.S. Captain Betancourt. The team that’s going to make breach, I need you to stand by,” a man can be heard saying in the audio. Two people with knowledge of the investigation said that the audio was authentic.

The breach proceeded, and the gunman was killed.

In the interview with The Times, Mr. McCraw said that Captain Betancourt’s directives to officers as he drove to the school and his actions once he arrived there were “under investigation.”

“He’s trying to get information is what he was doing,” Mr. McCraw said. “He wasn’t in a position to direct any D.P.S. resources.”

But according to documents obtained by CNN, at least some Department of Public Safety officers at the scene appeared to believe that the captain was issuing orders. “I heard someone shout out, Capt. Betancourt said all DPS personnel need to be on perimeter, do no enter building,” a state police lieutenant wrote shortly after the shooting, according to CNN.

Captain Betancourt told investigators that he did not tell any officers not to go inside the school until after he had arrived at the scene, according to CNN. The captain did not respond to requests for comment.

Similar messages about creating a perimeter were being conveyed at the scene almost from the start of the response, according to video reviewed by The Times.

Special Agent Luke Williams was one of the state police officers who disregarded a request to remain on the perimeter of the school and entered. “If there’s kids in there, we need to go in there,” he said, according to the report from the State House committee.

The ranger entered but moved to another part of the school to help students in other classrooms evacuate the school.

Sergeant Maldonado, who lives in Uvalde, arrived at the school with the first group of officers that included Mr. Arredondo.

In video footage reviewed by The Times, the sergeant could be seen holding a door open, armed with a rifle and wearing a tactical vest. Another officer, who stumbled outside after being shot at by the gunman, could be heard saying, “We’ve got to get in there.” Sergeant Maldonado responded, “D.P.S. is sending people,” and remained outside.

So did a D.P.S. trooper, Crimson Elizondo, who could be seen on body camera video lingering outside as others entered the school less than 10 minutes after the shooting began. Over the summer, she left the department for a job with the Uvalde school Police Department. After some parents objected, the school district fired her.

Another state police officer, Ranger Christopher Kindell, could be seen on video working on tactical plans. Later in the response, Ranger Kindell conferred extensively with Border Patrol agents inside the school who would later lead the breach team, and continued to confer even after additional gunfire prompted the team to advance to the classroom doors around 12:21 p.m. The team did not breach the doors for nearly 30 more minutes.

The actions of Ranger Kindell, Special Agent Williams and Trooper Elizondo are also under internal investigation, according to one of the people with knowledge of the inquiry.

Trooper Elizondo did not respond to a request for comment. Ranger Kindell, reached by phone, declined to comment. Special Agent Williams could not immediately be reached.

Reliance buys two-thirds of own gas from KG-D6; GAIL, Shell among other buyers

This Bakery Wants to Be Carbon-Neutral

J&K: 3 terrorists killed during encounter with security forces in Shopian