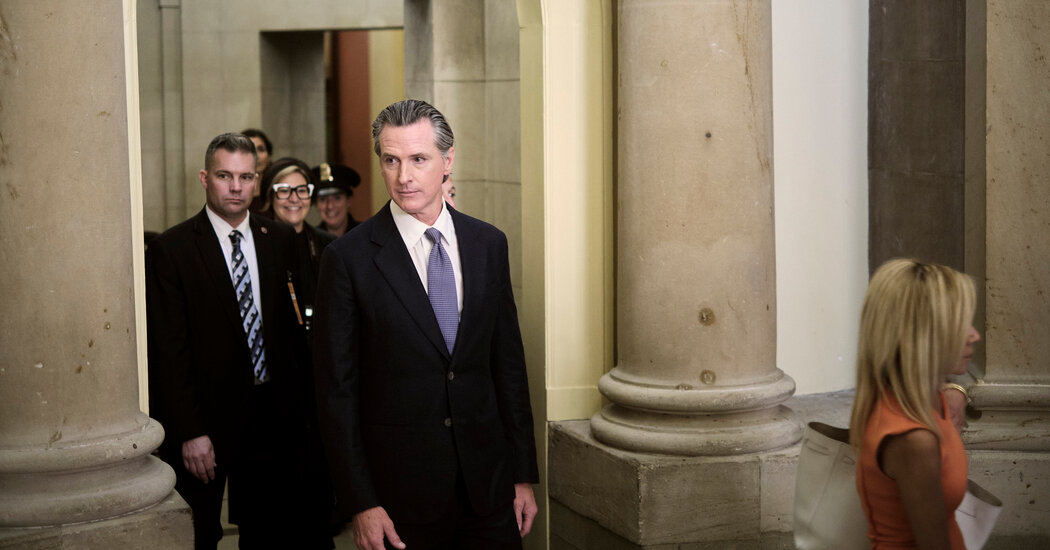 Gov. Gavin Newsom of California is poised to sign legislation that would provide a minimum $10,000 award to residents who successfully sue makers of illegal guns.

SACRAMENTO — On a Saturday night in December, Gov. Gavin Newsom of California was so frustrated by a Supreme Court decision allowing Texas residents to sue abortion providers that he went straight to social media to call for legislation allowing private citizens to enforce his own state’s gun laws.

It sounded so tit-for-tat that many Californians wondered if he was just trying to get a rise out of one of his favorite foils, Gov. Greg Abbott of Texas. Others doubted he was serious because it would have meant embracing a bounty system of enforcement that he considered legally dubious.

Seven months later, Mr. Newsom is not only poised to sign the bill on Friday, but he has leaned harder than ever into his rhetoric against Republicans. He ran an ad this month in Florida attacking the state’s Republican governor, Ron DeSantis, a possible 2024 presidential candidate. He has rebuked other states for banning abortion and ripped the Supreme Court for its recent decisions overturning Roe v. Wade and giving Americans a broad right to arm themselves in public.

While he has repeatedly insisted that he has no intention of running for the White House in 2024, Mr. Newsom’s actions sometimes seem to belie his statements. The Florida ad — a $105,000 spot worth more in free publicity — turned heads in national political circles. So did his visit to Washington this month and his declarations this spring that fellow Democrats were too meekly responding to Republican moves.

“I think he realizes that Democrats are hungry for a hero,” said Kim Nalder, a political science professor at California State University, Sacramento. “He’s building a profile as an alternative on the left to this aggressive policymaking we’ve seen by Republicans in recent years.”

It aims to bury those who deal in banned guns in litigation. Awards of at least $10,000 per weapon, and legal fees, will be offered to plaintiffs who successfully sue anyone who imports, distributes, manufactures or sells assault-style weapons, .50-caliber rifles, guns without serial numbers or parts that can be used to build firearms that are banned in California.

“No one is saying you can’t have a gun,” said State Senator Bob Hertzberg, a veteran San Fernando Valley Democrat who was tapped by the governor to craft and shepherd the complex legislation. “We’re just saying there’s no constitutional right to an AR-15, a .50-caliber machine gun or a ghost gun with the serial number filed off.”

On Friday, Mr. Newsom took out ads in three Texas newspapers rebuking Governor Abbott, spending $30,000, according to campaign spokesman Nathan Click. The full-page spread replaces the word “abortion” with “gun violence” in an Abbott quote about Texas’ abortion law. It also calls the gun enforcement legislation “California’s answer to Texas’ perverse bill that placed bounties on doctors and patients.” Mr. Abbott’s office did not immediately respond to a request for comment.

The bill is the capstone of a sweeping package of firearm restrictions that Mr. Newsom has signed this month. The new laws include fresh limits on firearm advertising to minors; intensified restrictions on unregistered “ghost guns”; and a 10-year ban on firearm possession for those convicted of child abuse or elder abuse.

“It’s time for us to stand up,” Mr. Newsom said in late June after the court struck down a New York law, similar to California’s, that strictly limited “public carry” permits. He said then that California had anticipated the ruling and that it was revising state law in ways that would offset “this radicalized and politicized Supreme Court.” He had 16 gun bills heading to his desk, he said, and he planned to sign them all.

The California laws come as mass shootings have intensified pressure for action on gun violence, as death tolls have mounted this year from Buffalo to Uvalde, Texas. Last month, President Biden signed the most significant gun violence legislation to clear Congress in nearly three decades, expanding the background check system for gun buyers under 21 and setting aside millions of dollars so states to enact “red flag” laws that allow the authorities to temporarily confiscate guns from people who are deemed dangerous.

But the congressional response, limited by a powerful gun lobby and deep partisan polarization, has been a far cry from the comprehensive solutions that many gun violence researchers feel are needed. And the conservative 6-3 majority on the Supreme Court has signaled an inclination to not only preserve, but also further expand gun rights.

That has left states led by Democrats to seek their own solutions. The search has extended beyond gun violence policies as the court’s rulings have upended reproductive rights and placed L.G.B.T.Q. protections and other civil liberties at risk. Increasingly, the charge from the left has been led by Mr. Newsom, who has had political capital to spare since last year, when he crushed a Republican-led recall.

Dan Schnur, a former Republican strategist who now teaches political science at the University of Southern California and the University of California, Berkeley, said that the governor’s motives were easy to deduce: Mr. Newsom believes his “California way” is a success, and using a national platform to call out Republicans helps rally constituents across the many media markets in his own immense state.

Also, Mr. Schnur said, “He is running for president.”

Mr. Newsom has said that he has “subzero interest” in the White House. “But just being seen as a player on the national stage serves him, even if he never runs,” Mr. Schnur said. “Mario Cuomo played that game for years.”

California’s gun laws are among America’s strictest, helping the state deliver one of the nation’s lowest rates of gun deaths. In 2020, the state’s rate of firearm mortality was about 40 percent lower than the national average, according to the Centers for Disease Control and Prevention, and the Public Policy Institute of California has determined that Californians are about 25 percent less likely to die in mass shootings, compared with residents of other states.

California’s gun policies, however, have been strained as conservative federal judges, many appointed by the Trump administration, have taken an increasingly hard line on Second Amendment rights.

The California gun bounty law is expected to face legal challenges that could ultimately land at the Supreme Court. The measure will not take effect until next year and includes a legal trigger that will automatically invalidate it if courts strike down its Texas underpinnings. The National Rifle Association and other gun advocates have argued that current state law already offers remedies for illegal activities by firearm manufacturers and dealers in California.

The same groups have argued from the start that the measure’s bounty scheme could — and would — restrict the Second Amendment, and the American Civil Liberties Union echoed their concerns.

“The problem with this bill is the same problem as the Texas anti-abortion law it mimics: It creates an end run around the essential function of the courts to ensure that constitutional rights are protected,” the A.C.L.U. said in a letter opposing California’s legislation. The group also charged that the legislation would “escalate an ‘arms race’” in creative legal attacks on politically sensitive issues including contraception, gender-affirming care and voting rights.

A recent N.R.A. legislative update said that on this and several other gun bills, they were “looking at all available options including litigation.”

In the meantime, Mr. Hertzberg said, Democrats will use all available tools.

“I don’t agree with the Supreme Court,” he said, “but if Texas is going to use this legal framework to harm women, then California is going to use it to save lives by taking illegal guns off the streets.”