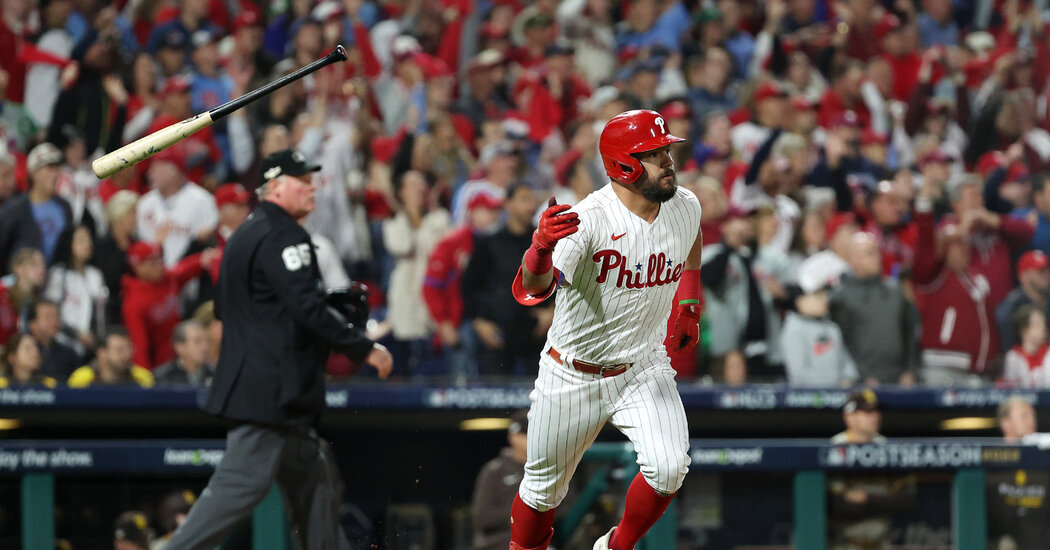 Despite a recommendation to stay the night in San Diego on Wednesday, Philadelphia’s road-weary players elected to get home as quickly as possible. So far, so good.

That’s not a guaranteed prescription for success, but it appears to be one route Philadelphia can take to earn its eighth National League pennant.

When Manager Rob Thomson said before the team left San Diego last week that “the science tells you you should stay over” but the road-weary Phillies players decided they would prefer to fly home following Wednesday afternoon’s Game 2 rather than sleeping another night in Southern California, it was not a casual reference.

The Phillies are one of five big-league clubs who consult with Dr. Chris Winter, a neurologist and sleep expert who has worked with Major League Baseball since 2006. The San Francisco Giants used his advice to tweak their October travel while winning three World Series rings during a five-year span from 2010-2014.

Current clubs that use Winter’s expertise include both teams in this National League Championship Series, the Phillies and the Padres. The others are the Los Angeles Dodgers, the Cleveland Guardians and the Boston Red Sox.

The “sleep science” to which Thomson was referring advised the Phillies that, based on travel direction and game timing, the smartest play was to stay put following Wednesday’s game.

But because the team had been on the road for 22 of 24 days, once the players learned they were playing Wednesday afternoon instead of that night, the veterans talked and Bryce Harper reached out to Dave Dombrowski, the club’s president of baseball operations, and lobbied to get home earlier.

“That’s what studies tell you, and I understand it,” Dombrowski said of the sleep science. “But I think sometimes you just have to go with what you think is best with your ball club in that regard.”

He noted that the Padres were also traveling after Wednesday’s game so there would be no advantage either way.

“Our guys have been away so long that I think the drive to get home and be there” is understandable, said Dombrowski, who noted that he also spoke with player representative Rhys Hoskins.

Kyle Schwarber punctuated the homecoming Friday night by smashing a leadoff home run in the bottom of the first inning. His second homer in three games energized both his team and the sellout crowd of 45,279 at Citizens Bank Park.

It came after the team landed in Philadelphia around 4 a.m. Thursday and Schwarber grabbed some sleep, went to the park for treatment and then enjoyed a nice, restful dinner.

Building itineraries, especially in October, is about far more than comfortable charter flights and top-shelf food. Especially when so many things remain unknown until the last minute and players and staff must adjust as circumstances change.

The Phillies this autumn have had their share of fluidity. They had planned to fly home following an afternoon division series game at Atlanta on Oct. 12. But during a three-hour rain delay, Dombrowski met with the players and they decided to reverse course, stay in Atlanta that evening and fly the next day instead.

The difference between that night and last week in San Diego, outfielder Nick Castellanos said, was geography and the length of the flight.

“The positions we’re in during that six hours from San Diego, it’s much more restricted and confined” physically, Castellanos said. “Usually, after six hours of being in high altitude like that, there’s an adjustment period your body needs to take to loosen up again. I feel like, for me, from a performance standpoint, I like being able to get in and have a day to at least stretch and get acclimated and basically wash off that cross country flight on a regular charter airplane.”

In a telephone interview during Game 3, Winter said that whatever his expert advice, he certainly understands a team being on the road as frequently in recent weeks as the Phillies wanting to get home. And despite the science, he said, that can be beneficial, too.

“This is where players have taught me over the years about not sleeping in your own bed,” said Winter, who is based in Charlottesville, Va., and hosts a podcast called “Sleep Unplugged.” “Some 5-foot-8 sleep doctor can say one thing, but a player’s belief plays into it a lot. To me, the science is one of the metrics an organization can use, like ‘do we go with a guy who is a left-hander or right-hander?’”

“It’s one piece of information that smart managers and G.M.s are able to manage with lots of data, and then they make the call.”

A complicating — but welcome — factor in October is that the traveling party also includes the players’ families. The Phillies are using two charter planes, one for the team, and one for front office personnel and families.

Asked what the most difficult part of packing has been, pitcher Kyle Gibson said, “That’s probably a better question for the wives and moms with kids. We were on an 18-day trip and I barely had more than one suitcase. But for the moms, they have to pack air mattresses, warm clothes, cold clothes. I would say the change of weather is probably the biggest thing. For me, I’m pretty basic. Give me some jeans a couple of shirts to wear to the field and I’m good.”

In Philadelphia on Friday, Gibson said it felt as if the team hadn’t seen its home in forever.

“Shoot, the house smelled a little like it had been closed up for three weeks,” he said. “Being there, it’s a welcoming sight for sure. We know that the fans are going to be fired up, we know we’ve been playing real good baseball and they recognize that. And we know it’s going to be an exciting atmosphere.”

Time together traveling, of course, can act as a bonding agent.

“Twenty straight days on the road and just home for what felt like a blink and right back on the road,” Hoskins said. “Yeah, we’re around each other for 14 hours a day — 12, 14 hours a day for seven months straight. And then you couple that and kind of take a lot of the families out when we go on the road, we have to spend time with each other.

Clearly, planes, buses and hotels have not slowed the Phillies down. And who knows, the extra round of wild-card playoffs might make extended trips a thing. When Tampa Bay opened at Cleveland two weeks ago, the Rays had finished their season on a nine-game trip before visiting the Guardians.

When someone asked Terry Francona whether he thought that would give his team an advantage, he didn’t hesitate.

“That and socks,” Schwarber said.

‘Bhuj’ debutante Pranitha Subhash: Bollywood has space for everyone