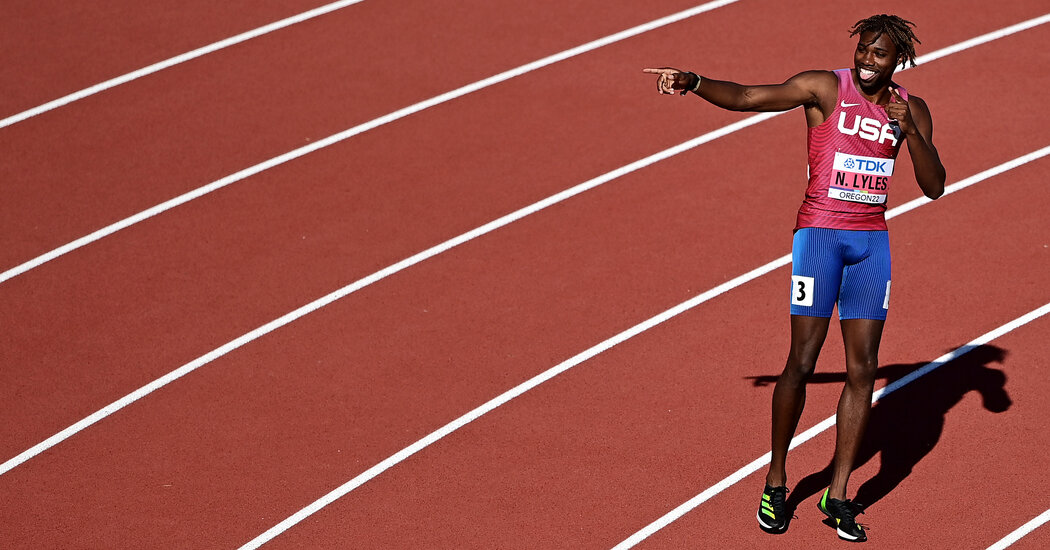 Noah Lyles danced across the red track at Hayward Field. He slapped hands and mugged for selfies with the fans and smiled as though he had won another world championship.

He had not. He had won a preliminary heat Monday in the 200-meter dash, his signature event. He was still another race and three nights away from a showdown with his budding rival, Erriyon Knighton, the teenage wunderkind of track and field that Lyles, who turned 25 Monday, had been not so long ago.

Most important though, Lyles appeared light years away from that heavy and hot night in Tokyo last year, when he broke down after winning the bronze medal in the 200, an event that most had expected him to win.

Lyles was not dancing that night, and there were no fans in the stadium for him to even wave to, much less share a photo with. On that night, he was another in a string of high-profile athletes at the Games to speak to the world about a battle with mental health, of going on and off anti-depressants, and of trying not to let winning or losing define him.

“A lot of work, a lot of therapy,” Lyles said Monday night of how he arrived at such a different place, despite the enduring pressure to re-establish his supremacy.

That evolution would have been hard to foresee a year ago, perhaps even as hard as it might have been to envision just how much more acceptable it would be for elite athletes to share their struggles with mental health in almost the same way they speak about knee pain and muscle soreness. But that is what has happened both for Lyles and for sports more broadly.

During the last year, Lane Johnson of the Philadelphia Eagles; Simone Biles, the world’s top gymnast; and Naomi Osaka, one of the best tennis players, have all opened up about their mental health battles and taken leave from their pursuits.

On Monday, Lyles described a series of epiphanies, as well as the end of a not-great relationship, that combined to have dramatic and positive effects on his mental state, giving him a better understanding of why he has dedicated so much of his life to trying to run halfway around a track faster than anyone else.

One of those realizations came to him last winter at the Millrose Games, a winter indoor meet in New York City. Lyles had signed on to race in the 60, but he wasn’t sure why. He doesn’t excel in the event and was surrounded by champions who do.

“How did I even get in this race?” he recalled.

Then he saw a post on social media about running as a kind of theater with Lyles as one of its stars from Michael Johnson, the four-time Olympic gold medalist who famously raced in golden spikes.

“It said that people don’t go to races to watch people run, they go because they enjoy watching you run,” Lyles said. “That spoke to me.”

The second epiphany came during a therapy session, when he was talking about how frustrated he had become over his performances last year, especially at the Olympics. They had been, for him at least, average, though it’s worth noting that his version of average is running 200 in 19.7 seconds. Usain Bolt’s world record is 19.19.

His therapist explained to him that he is, at heart, a performer, and performers need an audience. For nearly two years, the pandemic deprived him of that, culminating with the Olympics, where the track meet unfolded in a largely empty stadium that should have been teeming with 70,000 screaming fans.

“If the crowd isn’t there you are going to run average,” Lyles said his therapist told him.

And suddenly, a part of his sadness of last year made more sense to him. There were other forces at work, too, forces that Lyles laid bare on that tearful night in Tokyo.

He felt guilty that he had made it to the Olympics while his younger brother, Josephus, had not. For years, countless people had been telling him he was supposed to become the next Usain Bolt, but he was just trying to figure out his own identity. He’d battled depression and had decided to be open about his mental health, including his years of therapy as a child after his mother, who also struggled with mental illness, saw that her son shared some of her emotional traits.

“I am not defined by being an Olympic bronze medalist, or a gold medal world champion, or the high schooler who went pro,” he had said that night. “That’s not who I am. I’m Noah Lyles. I’m not Usain Bolt’s successor. I’m not Andre de Grasse’s successor. I’m nobody’s successor. I am me, and that’s who I will always be.”

On Thursday night, Lyles will take on Knighton, the 18-year-old phenom seen in track circles as both his and Bolt’s successor. Knighton finished fourth in the 200 in Tokyo and has broken Bolt’s junior record at the distance.

So far in Oregon, Knighton has been calm, composed and fast. He won his semifinal heat in 19.77 seconds, compared with 19.62 for Lyles.

Knighton described Lyles on Tuesday as a “good friend.”

“We try to push each other on the track as much as we can,” he said of Lyles.

The comparisons with Bolt and the expectations that his performances have wrought have not changed him, Knighton said. He’s the same person he was last year, with one difference.

For Lyles, the differences are hard to overstate.