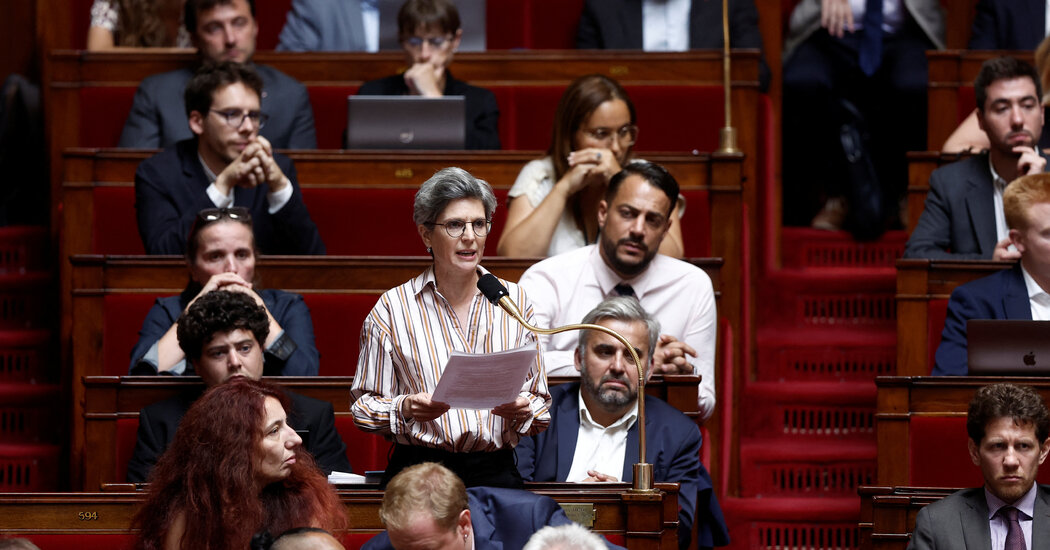 A Green politician told men to get over meat and masculinity for the sake of the planet, setting off a sizzling argument.

PARIS — It’s “la rentrée” in France, the back-to-school, return-to-normal month after the vacations that is often marked by renewed social conflict. But nobody expected France to be up in arms over barbecues.

Barbecue has become the word on every front page, the subject of heated TV debates and the source of a crisis in national identity ever since Sandrine Rousseau, a member of Parliament from the Green Party, declared on Aug. 27 that “we have to change our mentality so that eating a barbecued entrecôte is no longer a symbol of virility.”

Politicians across the political spectrum — from the far-right to the Communist Party — erupted. They accused Ms. Rousseau of impugning the deep Gallic attachment to the marbled beef prepared by the delicate incisions of French butchers, insulting and “deconstructing” men, projecting gender wars onto pleasant summer gatherings and generally spreading gloom.

“Stop this madness!” Eric Ciotti, a lawmaker from the Gaullist Republicans party wrote on Twitter. Another party member, Nadine Morano, said, “That’s enough of accusing our boys of everything!”

Fabien Roussel, the secretary general of the Communist Party, took a different tack: “Meat consumption is a function of what you have in your wallet, not in your panties or your underpants.”

Ms. Rousseau, a senior member of the Europe Écologie-Les Verts party, said in an interview that she was surprised by the sizzling brouhaha. Her point was that “if you want to resolve the climate crisis, you have to reduce meat consumption, and that’s not going to happen so long as masculinity is constructed around meat.”

She offered no conclusive evidence of the virility involved in, or symbolized by, heating charcoal, laying sausages and slabs of red meat on a rack and standing there bare-chested in the billowing smoke to cook them.

But a study known as INCA conducted every seven years by the French ministries of agriculture and health suggests French men eat 59 percent more meat than women.

French society, Ms. Rousseau suggested, has its overwhelmingly male head in the sand when it comes to combating climate change, despite a summer of severe drought and wildfires.

“These men react as if I am tearing out their hearts and lungs!” she said. “Yet, after a summer like this, we clearly need to think about how to replace conviviality around raw meat on a barbecue. We can grill bell peppers. We can have a picnic. We can reimagine what has value.”

That would be a tough adjustment in France where attachment to “terroir” — the land, the special characteristics of a particular parcel of it, the nature of its soil, the characteristics of the livestock that graze there — is passionate. The annual Paris Agricultural Fair, where farmers show off their hefty prize cattle, is a major national event, to the point that many politicians have lost any hope of high office by not looking comfortable patting the hindquarters of a cow.

And this country, the land of steak frites, will content itself with barbecued bell peppers?

It seems implausible, but times are changing. The planet is heating up. France just went through its second-hottest summer in more than a century. The United Nations estimates that livestock emissions make up some 14 percent of all man-made greenhouse gases, including methane.

Already, in the French presidential election campaign this year, it was clear that the politicization of food had gone a long way. The country split between the red-meat crowd, mainly on the right, and the quinoa and tofu brigade preaching the virtues of nuts and vegetables, concentrated among the Greens.

The land of gastronomy has become the land of heated debate over the cultural and political symbolism of food. Traditionalists detect signs of American-imported “cancel culture” in the attempt to put steak and lamb off-limits to save the planet. There’s even a new word — the “mangeosphère,” or roughly the eating sphere — coined by the French daily Le Monde for these discussions on the semiology of a ham sandwich or an apple.

Mr. Roussel, then the Communist Party presidential candidate, was fiercely criticized in January for saying all French people should have the right to traditional fare. “A good wine, good meat, good cheese, that is French gastronomy,” he said.

The comment was immediately attacked as xenophobic, with Ms. Rousseau in the vanguard of his critics. What about couscous and sushi? And the millions of French Muslims, who do not drink wine? And the vegans who are not much interested in “good meat?”

Nonetheless, Mr. Roussel’s popularity briefly surged, and thunderous applause at rallies greeted his cry of: “What are we going to eat? Tofu and soy beans? Come on!”

The French left is split. Mr. Roussel represents the wing that rejects the wholesale remaking of the French diet — he has promised lots of red meat at the annual music festival organized by the communist newspaper L’Humanité later this month — while the Greens and France Unbowed party insist change is needed.

“There’s a difference between the sexes in the way we consume meat, and people who decide to become vegetarians are mostly women,” Clémentine Autain, a lawmaker with the Unbowed party, told BFMTV in a strong defense of Ms. Rousseau. “So if we want to go toward equality we have to attack virilism.”

She did not say how she would go about that.

Julien Odoul, a member of Marine Le Pen’s extreme right National Rally, was not impressed. He declared that men had always eaten more meat than women and that “it’s not virilism, it’s nature.” He vowed to pursue a “Cro-Magnon diet,” an allusion to cave-dwelling early humans in the French southwest.

Ms. Morano, the representative from the center-right Republicans, called for an immediate halt to the “deconstruction” of French men. Jacques Derrida, the French philosopher who died in 2004, coined that term but generally applied it to texts rather than French males.

As for Ms. Rousseau, she said: “I am not against men. I am against a patriarchal system that is taking the planet into a wall.”

Planning for a Dark Christmas in Kyiv

'Enough will do, ensure conformity of SC order': Delhi HC to Centre over oxygen...