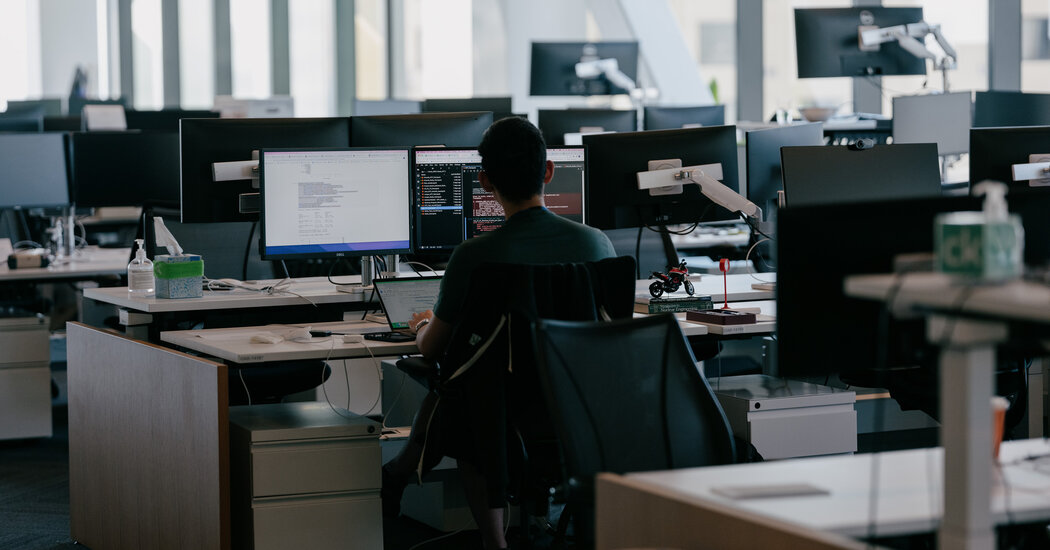 Labor Day has become a flash point for big companies who want workers to return to the office.

The pandemic upended American offices like nothing in memory. But now many big companies are again starting to require employees to work in person. To understand how that’s going, I called my colleague Emma Goldberg, who covers workplace issues.

This subject is close to home for us: The Times expects employees to resume in-person work this month. Have you been in the office?

I’ve been going in about once a week. I love the energy of the newsroom, I love seeing people, and I miss my work friends. My beat feels like this intersection between the conversations I’m having with co-workers and the conversations I’m having with people in different states and industries. I get to follow the reporting threads that come from what my co-workers are experiencing. But I do get a lot done at home. And there are aspects of returning to the office that I’m apprehensive about, like having to commute instead of going on a morning run.

Some companies have tried to bring workers back, but Covid variants derailed those plans. Are those efforts ramping up again?

Many companies that planned to call people back into the office have done so, at least for a few days a week. After the Omicron wave, companies started saying, “OK, we pushed it back, but we really want you to come back now.” Labor Day 2022 has become a flash point for companies that have been in a hazy middle ground, with workers in the office one or two days a week.

Others have embraced permanent remote work. Airbnb, for example, said its employees never need to come back to the office. Some have leaned into the idea that the office is going to be less of a space for work. Salesforce opened a kind of retreat center for nature walks, cooking classes and different activities that let workers spend time together. Zillow, which says it’s “headquartered in the cloud,” has redesigned some of its office spaces to look more like social spaces.

We’re talking about a minority of the work force that isn’t back in person, right?

At the peak of lockdowns, in May 2020, just over a third of U.S. workers worked remotely at some point during the month, according to the Labor Department. Most blue-collar jobs never went remote, and many offices in small and midsize cities have since returned. But in the 10 largest U.S. cities, workers were still working from home around 38 percent of the time earlier this summer, according to researchers at Stanford and elsewhere.

Why do those workers continue to prefer remote work?

Covid still weighs on many, especially immunocompromised people or those with immunocompromised family members. For caretakers, remote work has meant more flexibility; previously, they might have felt pressure to wait until their boss left the office before scrambling to pick up their kids. Women and workers of color have been more likely to say they prefer to keep working remotely, sometimes attributing that to microaggressions they’ve experienced in the office. And some workers feel they’re judged more on the quality of their work and not their capacity to office politick.

Why do companies want workers back?

That’s the million-dollar question coming from workers right now, because it hasn’t always been articulated. Some employers use squishy terms like “company culture,” or they talk about the serendipity of the water-cooler chat, the billion-dollar idea that comes from a run-in in the hallway. Other companies make the case that in-person interactions improve productivity. For many, it most likely comes down to leases. Commercial real estate leases are often very long, seven or even 10 years, especially for bigger companies. Some just have large spaces that they can’t justify not using.

How are workers reacting to companies’ return plans?

Many want at least some flexibility. They feel that remote work was proof that they can be productive even when they’re not in the office. On the other hand, there’s a real sense of missing work friendships: the person who sits next to you, whom you gossip with or vent to. And offices have really leaned into perks to get people back — Ping-Pong, rock climbing, bands. Google even had Lizzo perform for its employees.

If anything is going to derail return-to-office plans, it will be workers feeling empowered to assert their needs, through unions or other groups. A lot of workers have developed a sense during the pandemic that work doesn’t have to run their lives or come before their families or their health. Apple, for example, has said it wants employees back in the office at least part time after Labor Day. But a group of workers called Apple Together has put out several strongly worded open letters demanding to work remotely. And I’ve spoken to workers who have left companies and applied only for opportunities that let them be fully remote.

What will you be looking for as workers return?

The big questions are “Will workers actually come back?” and “How far are managers willing to go to enforce their own rules?” I’m also interested in the quirks of what returning will look like, from wardrobe malfunctions to commuting woes as people readjust to blazers and stilettos and subway rides.

More about Emma: She joined The Times in 2019 and last year published “Life on the Line,” a book about doctors during the pandemic. Among her first introductions to office life was getting hit in the face during softball league as an intern at a Washington think tank. The person who broke her nose became one of her closest friends.

The Sunday question: What legacy does Mikhail Gorbachev leave?

A peaceful end to the Cold War, freedom for former Soviet states and more liberty for Russians, says The Financial Times’s editorial board. The Atlantic’s Anne Applebaum thinks Gorbachev’s failures to promote democracy, revitalize the economy and fully reckon with the Soviet Union’s past wrongs helped birth today’s autocratic and corrupt Russia.

Fanny Brice: Lea Michele landed her dream role in “Funny Girl.” The pressure is on.

Sunday routine: How the editor in chief of Elle Decor spends his day.

By the Book: Mo Willems thinks you should reread the “Peanuts” collections.

Our editors’ picks: “Diary of a Misfit,” a memoir that looks into a family mystery, and eight other books.

Times best sellers: R.F. Kuang’s “Babel” is a No. 1 debut on our hardcover fiction list. See all our lists here.

On the cover: A Marvel role could make Jonathan Majors a superstar. He’s so much more than that.

The Ethicist: What to do when an older acquaintance turns out to be a bigot.

It’s good: Justin Tucker is the best kicker the N.F.L. has ever seen.

Talk: A conversation with Father Mike, the priest behind one of the biggest religion podcasts.

At this time of year, Krysten Chambrot is looking for recipes that suit the temperatures (high) and her energy level (low). For weeknight dinners she recommends low-cook dishes including cheesy kimchi noodles, chicken and cabbage salad and sheet-pan feta with chickpeas and tomatoes.

Matthew Cullen, Tom Wright-Piersanti and Ashley Wu contributed to The Morning. You can reach the team at [email protected].