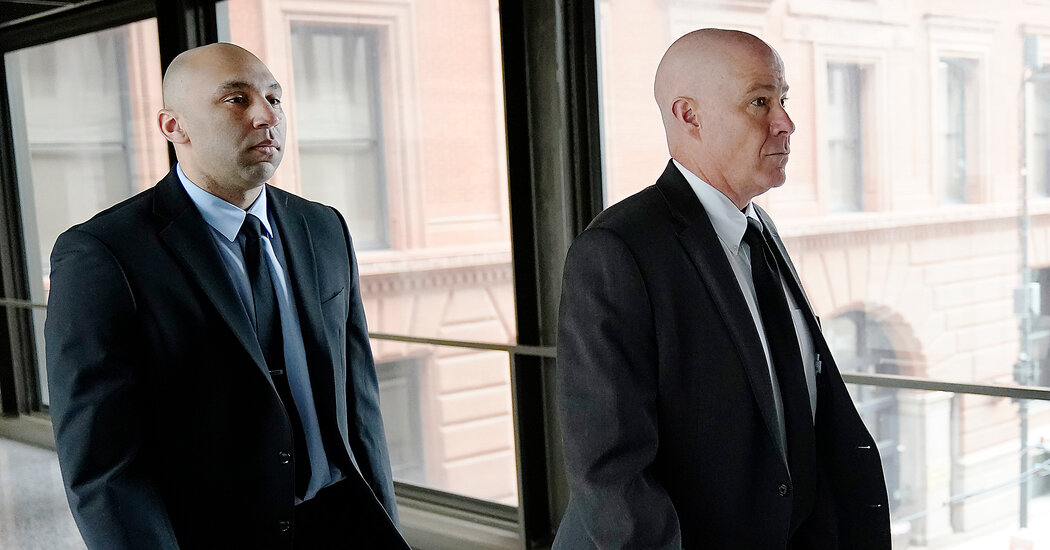 J. Alexander Kueng was a rookie Minneapolis police officer when he held Mr. Floyd down while a fellow officer fatally knelt on his neck.

A former Minneapolis police officer who helped to pin George Floyd down as he gasped for air under the knee of another officer pleaded guilty to manslaughter on Monday, forgoing a trial in exchange for an agreement to drop a more serious murder charge.

J. Alexander Kueng, a rookie officer who had joined the Minneapolis Police Department with what he said were hopes of improving it from within, placed his knee on Mr. Floyd for several minutes in May 2020 while Mr. Floyd protested that he could not breathe and eventually lost consciousness. The death of Mr. Floyd, who was Black, set off protests around the world over racism and police abuse. and led to federal civil rights charges against the officers who were at the scene when he died.

Mr. Kueng, who also is Black, is already serving a three-year prison sentence in the federal case, after a jury convicted him of failing to provide aid or to intervene as another officer, Derek Chauvin, knelt on Mr. Floyd’s neck for more than nine minutes. Mr. Kueng had knelt on Mr. Floyd’s torso.

As part of Mr. Kueng’s plea agreement, the Minnesota attorney general’s office and Mr. Kueng’s lawyers agreed that they would recommend a sentence of three and a half years in federal prison, time that would be served concurrently with his state sentence.

The guilty plea came on what was scheduled to be the first day of jury selection for the murder trial of Mr. Kueng and another of the officers, Tou Thao, who kept back bystanders who were shouting that Mr. Floyd needed medical help. Mr. Thao, who is Asian American, is now the last of the four officers with unresolved criminal charges in the case.

Civil rights trial. In February, Mr. Kueng, Mr. Lane and Mr. Thao were found guilty of willfully violating Mr. Floyd’s constitutional rights in federal court. Mr. Lane was sentenced to two and a half years, Mr. Kueng to three and Mr. Thao to three years and half years in prison. Mr. Chauvin, who had also been charged with violating Mr. Floyd’s rights, reached a plea agreement in December 2021 and was later sentenced to 21 years in federal prison. His federal and state sentences are to be served concurrently.

On Monday, Mr. Thao agreed to forgo a jury trial in favor of an unusual process in which the defense and the prosecution jointly present an agreed-to set of facts to the trial judge, who will then decide Mr. Thao’s guilt or innocence. There will not be any witness testimony, and the judge, Peter A. Cahill, will issue a memorandum explaining his verdict. As part of the deal between prosecutors and Mr. Thao, prosecutors will ask for a verdict only on the manslaughter charge, though they could theoretically reinstate the murder charge.

Mr. Chauvin, who is white, was convicted of second-degree murder by a state jury last year in a highly watched televised trial and later pleaded guilty to a federal charge of violating Mr. Floyd’s rights. He is expected to spend more than two decades in prison.

The fourth officer, Thomas Lane, who held down Mr. Floyd’s legs, was convicted in federal court of violating Mr. Floyd’s rights by not providing medical care; he also pleaded guilty to a state charge of aiding and abetting second-degree manslaughter. Mr. Lane, who is white, was the only officer to suggest at the scene that the officers should roll Mr. Floyd onto his side to help him breathe. Mr. Lane is expected to serve just over two years in prison, after taking into account credit for good behavior.

All four officers were fired the day after Mr. Floyd died, as protests engulfed Minneapolis and spread to other cities, turning destructive at times.

Keith Ellison, the Minnesota attorney general whose office has led the state’s prosecutions of all four officers, said he hoped Mr. Kueng’s guilty plea would bring comfort to Mr. Floyd’s family, who he said had “turned a personal tragedy of immense proportions into a movement for justice for all.”

On May 25, 2020, the officers drove to an intersection outside a South Minneapolis convenience store after a clerk at the store called 911 to report that Mr. Floyd had used a counterfeit $20 bill to buy cigarettes.

Mr. Floyd, 46, who had worked as a security guard before losing his job during the coronavirus pandemic, resisted the officers’ attempts to get him into the back of a police car, ultimately pushing his way out of the back seat with his legs while handcuffed.

As Mr. Floyd lay handcuffed and face down on the street, Mr. Chauvin continued to hold his knee on the back of Mr. Floyd’s neck for several minutes after Mr. Floyd passed out. Mr. Floyd never regained consciousness.

Mr. Kueng’s mother told The New York Times shortly after Mr. Floyd’s death that her son had defended his decision to join the police force and argued with friends over whether public protests led to improvements in policing.

“He said, ‘Don’t you think that that needs to be done from the inside?’” his mother, Joni Kueng, recalled him saying several years before Mr. Floyd’s death, when he watched protesters block a highway.

He had attended Monroe College in New Rochelle, N.Y., where he played soccer until needing surgery on both knees. He returned to Minneapolis and worked at a job catching shoplifters at a Macy’s store, and then signed up as a police cadet in February 2019, graduating from the police academy in December of that year.

Mr. Kueng was in a training period for the next few months after that, with Mr. Chauvin often serving as his field training officer. He became a full officer on May 22, 2020, and on his third full day on the job, he and Mr. Lane were the first officers to respond to the call from the convenience store clerk about Mr. Floyd.