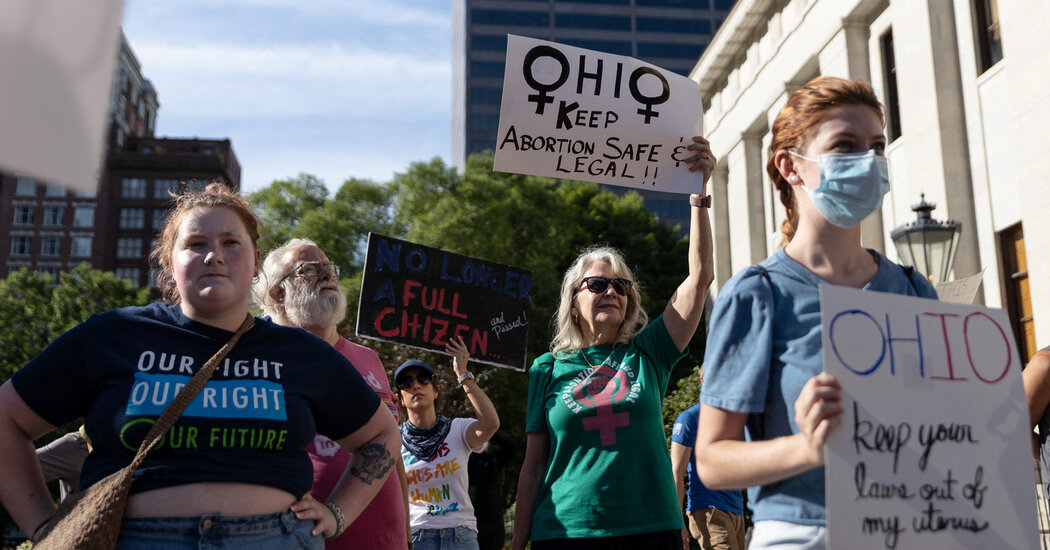 Abortion was illegal after six weeks of pregnancy, but a judge put the law on hold after abortion rights advocates sued the state.

An Ohio judge on Wednesday temporarily blocked the state’s ban on abortions after six weeks of pregnancy, saying that the right to abortion is protected under the state’s Constitution.

The decision restores broad abortion access — at least for the next 14 days — in Ohio and widens access in a block of states where abortion has been banned or unavailable since the U.S. Supreme Court’s June decision ended the constitutional right to abortion.

Across the region, the bans have required women who sought or needed abortions to travel great distances. In one widely publicized case, a 10-year-old Ohio girl who had become pregnant through rape was denied an abortion in Ohio and traveled instead to Indiana. As of Thursday, abortion becomes largely illegal in Indiana, which passed a ban after the Supreme Court ruling, though that state’s law is also the subject of a lawsuit.

More than a dozen states ban or severely restrict abortions, and more state legislatures are considering restrictions while others strengthen abortion rights in a shifting legal patchwork across the country. This week, West Virginia passed a near-total ban and Senator Lindsey Graham proposed a national ban on abortion after 15 weeks.

In Ohio, a judge in the Hamilton County Court of Common Pleas wrote that the plaintiffs, a group of Ohio abortion providers, were likely to prevail on the merits of their lawsuit at trial.

Judge Christian A. Jenkins agreed with the providers’ argument that there was a “fundamental right to abortion” under the Ohio Constitution because it granted equal protection and benefit to women. He noted that a previous federal court decision on abortion had recognized that the State Constitution allowed greater rights than the federal one. He also recognized that voters had approved a “health care freedom amendment” to the Constitution in 2011, preventing the state from prohibiting or penalizing the purchase of health care. That law had been passed as a rejection of the Obamacare expansion of health insurance.

“No great stretch is required to find that Ohio law recognizes a fundamental right to privacy, procreation, bodily integrity and freedom of choice in health care decision making,” wrote Judge Jenkins, a Democrat.

It was a rare win for abortion rights supporters, who have filed suits against more than a dozen states that had banned abortion in anticipation of the Supreme Court’s decision to overrule Roe v. Wade, which for nearly five decades supported a constitutional right to abortion. Those suits argued state constitutions contained a right to abortion, but in most cases, judges declined to block the bans while the legal cases proceeded. In only three states — North Dakota, Utah and Wyoming — did abortion rights groups succeed in temporarily blocking so-called trigger bans on abortion.

Ohio, which became a laboratory for increasingly strict abortion restrictions over the past decade, passed its six-week ban in 2019. The law restricts abortion after fetal cardiac activity can be detected, which is generally six weeks after the start of a pregnant woman’s last period, and before many women realize they are pregnant.

In his decision, Judge Jenkins cited affidavits from abortion providers that described the harms to women who had been unable to get abortions, including the 10-year-old girl, who was six weeks and three days pregnant when she sought the procedure. High school girls had threatened to drink bleach, or ended up on suicide watch, when they were told they could not get an abortion. One woman needed chemotherapy for recurrent cancer but was eight weeks pregnant so could not get an abortion or treatment for her cancer in Ohio.

The law, the judge wrote, “clearly discriminates against pregnant women and places an enormous burden on them to secure safe and effective health care.”

Mike Gonidakis, the president of Ohio Right to Life, said that the judge was making “a political statement, not a statement based in law or fact,” and predicted that the Ohio Supreme Court would ultimately uphold the 2019 law. “Nowhere in the Ohio Constitution can an average person even glean that there’s a state constitutional right to abortion,” he said.

The judge’s order means that women in Ohio can once again get abortions until 22 weeks of pregnancy. While the restraining order was granted for 14 days, lawyers for the abortion providers said the judge could extend it after another hearing.