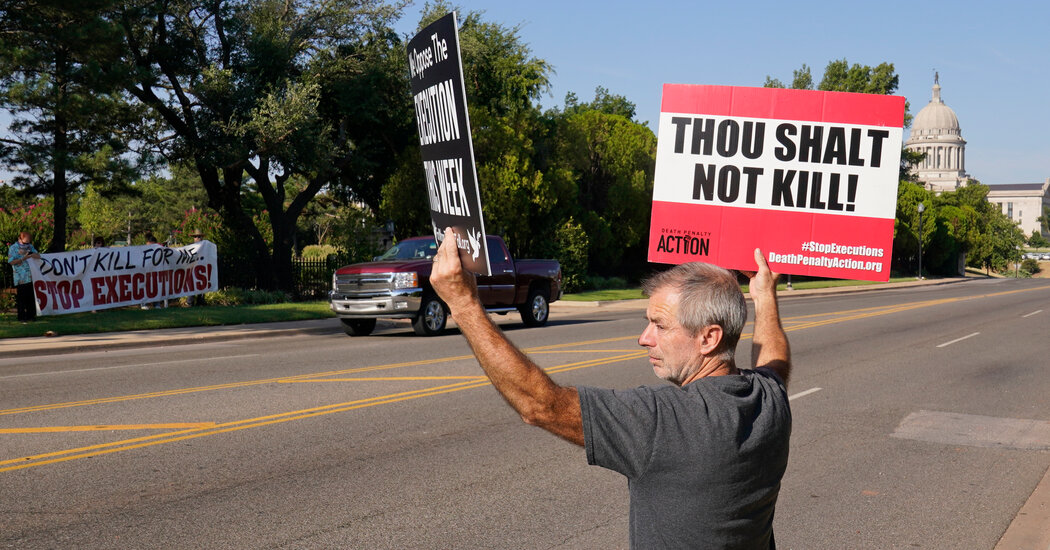 James Coddington, who was convicted of murdering a co-worker with a hammer, is the first of 25 men the state is aiming to execute over the next 28 months.

Oklahoma executed a man on Thursday for killing a co-worker in 1997, rejecting the recommendation of a state pardon board as it carried out the first in a series of 25 executions scheduled over the next 28 months.

James Coddington, 50, who admitted killing 73-year-old Albert Hale with a hammer, was executed by lethal injection at a state prison in McAlester, Okla.

Oklahoma resumed carrying out some executions in October 2021 after a pause of nearly seven years that followed a series of botched executions. But most of the state’s capital sentences remained on hold while a lawsuit over the use of a sedative in executions went to trial. When a judge upheld the use of the drug, Oklahoma scheduled 25 executions through December 2024, beginning with the one on Thursday.

Plans for Mr. Coddington’s execution were thrown into doubt for a time when the state’s Pardon and Parole Board recommended on Aug. 3 that his life be spared. An unusual coalition had formed over the past several weeks to oppose the execution, including a former director of the Oklahoma prison system and a Republican who once served as the speaker of the state’s House of Representatives. Both said that Mr. Coddington had rehabilitated himself and was far different from who he was when he committed the crime.

“It would not be in the best interests of the state of Oklahoma to execute someone who manifests such redemption,” the former director of the state’s prisons, Justin Jones, wrote in The Oklahoman newspaper this week.

But Gov. Kevin Stitt, a Republican, who appointed most of the board’s members, rejected their recommendation, and the execution was allowed to proceed.

Instead, as Mr. Coddington lay on a gurney in the execution chamber, he thanked his relatives, friends and lawyers, according to reporters who witnessed the execution, and said, “Governor Stitt, I don’t blame you, and I forgive you.”

The witnesses said Mr. Coddington’s breathing became labored and his chest heaved after receiving the first drug, a sedative called midazolam, but he otherwise showed no signs of discomfort. Midazolam had been the subject of court challenges in Oklahoma and other states from death row prisoners who said that it might be ineffective, creating the possibility of intense pain when the next two drugs are administered to paralyze them and stop their hearts.

Mr. Coddington said he was high on cocaine when he killed Mr. Hale, with whom he had worked at a car parts store for several years.

Mr. Coddington testified at his trial that he had gone to Mr. Hale’s home to ask for $50 to buy drugs, but that Mr. Hale had refused and had told him to seek help, sending Mr. Coddington into a rage. He said he grabbed a hammer and struck Mr. Hale in the back of the head, and then took money from the victim’s pants pocket.

Mitch Hale said after the execution that he had found no joy in watching it, but was glad it happened, because it would allow him and his family to move on after years of legal proceedings.

“This is finally over, and that’s the only thing we wanted, was just everything to stop,” Mr. Hale said at a news conference. “Unless you’ve been inside this system on the victim’s side, you don’t understand how you just get kicked around like a football. No one cares about us; it’s always the criminal’s side.”

Among the men scheduled to be killed is Richard Glossip, who was convicted of arranging the murder of a hotel owner but who has long claimed to be innocent. Another man, Justin Sneed, admitted to carrying out the killing, but he testified that Mr. Glossip had directed him to do so and promised to pay him thousands of dollars. A law firm commissioned by a bipartisan group of state lawmakers recently examined the case and said that there was credible new evidence that Mr. Sneed had acted alone and that Mr. Glossip should not have been convicted.

Mr. Glossip’s lawyers have asked a state criminal court for a hearing to review the new evidence, which the state has opposed. Last week, Governor Stitt delayed Mr. Glossip’s execution until December so the court could consider whether to hold the hearing.

So far this year, Oklahoma has executed three people, more than any other state. Five states have carried out a total of 10 executions in 2022, according to the nonprofit Death Penalty Information Center.