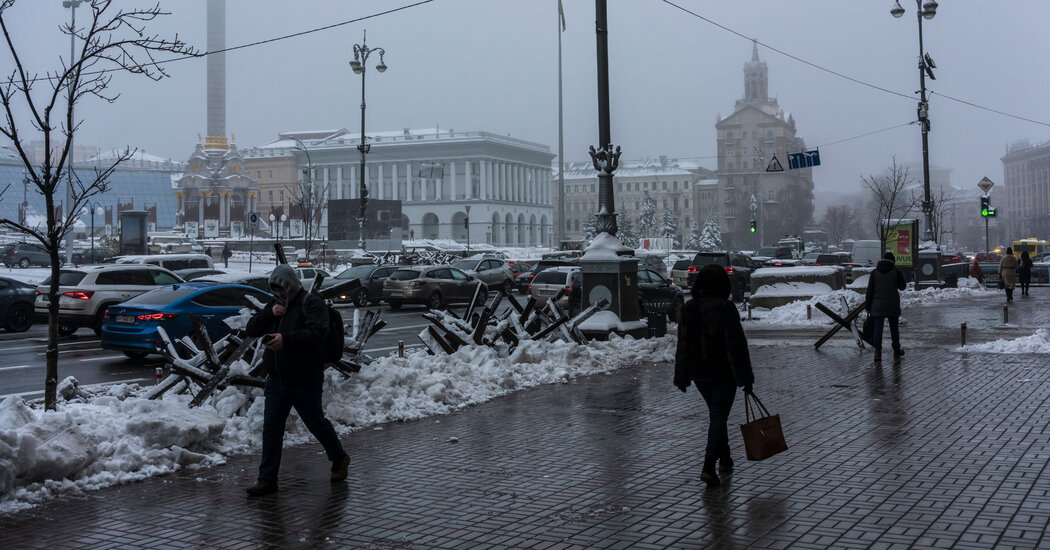 Beyond the enormous cost of rebuilding the country are difficult and delicate choices about how to best connect the nation to European markets and commerce.

With Russian missiles pounding apartment buildings, power plants, schools and roads, a glimmering vision of a reconstructed postwar Ukraine seems impossibly far off. But an urgent battle of ideas has already begun over how to manage what would be the most extensive rebuilding project in Europe since the end of World War II.

The sparring has engaged heads of state and the leaders of humanitarian groups, universities and banks from around the world — representing the governments, organizations and companies ready to donate or lend the hundreds of billions of dollars that could be needed, as well as those who stand to profit from it.

Attention to salvaging Ukraine’s damaged cities and infrastructure has focused largely on its cost. The tussle over the framework that will in large part be expected to carry out that restructuring has taken place below the surface, gaining far less public notice.

Any shift for Ukraine from a wartime to a peacetime economy promises to be fraught, pitting ideas for a strong central government that would target spending with a tighter hand against one with lighter-touch regulation in which free markets dominate. There are other tricky, though perhaps less prominent, transitions that would need to be simultaneously navigated.

Three decades have passed since Ukraine gained its independence, but the Soviet legacy lingers. It can be seen in the supply lines and transportation networks that were created when Kyiv and Moscow were part of a single nation. Ukraine was engineered and equipped with Soviet-era design, machinery and infrastructure that in many ways remain disconnected to Europe. For example, Ukraine’s railroad gauges are a different size from Europe’s, meaning trains can’t cross borders easily.

The lack of integration exists in sector after sector. Parts for everything from nuclear reactors to refrigerators previously supplied by Russia will need to come from elsewhere.

More challenging is the legacy of Ukraine’s flawed and incomplete transition to a modern, democratic market economy after the breakup of the Soviet Union. Parts of its commercial world have been plagued by corruption and cronyism. And Ukraine has yet to create the kind of resilient political institutions that undergird the standards of governance set by the European Union, which is likely to be its largest trading partner if the war is won.

This lack of an accountable, transparent and reliable public sector is at the core of much of the debate over what Ukraine should look like and who gets to make those decisions.

“There is this idealistic view that the government can direct resources and people will listen,” said Yuriy Gorodnichenko, an economist at the University of California, Berkeley. “As somebody who grew up in Ukraine,” he added, “that’s not how it works.”

Mr. Gorodnichenko contributed to reports on Ukraine’s reconstruction for the Center for Economic Policy Research in London, an independent network of economists. The group’s recommendations are wide-ranging, but among them is a call for a “radical deregulation of economic activity” that includes more reliance on the market to distribute resources and guide the economy, a loosening of labor laws, and a shift of political and economic control away from the central government to localities.

Such calls have set off alarms.

“I find it just gobsmacking,” said Joseph Stiglitz, an economist at Columbia University and a Nobel laureate. He worries that the kind of hands-off, neoliberal approach that he argues has brought inequality, environmental degradation, and insufficient housing and medical care in the United States and other countries is being promoted as a model for Ukraine.

Ukraine is clearly in crisis mode, struggling to feed, house and warm the population through the winter while fighting a war. Survival is the priority. Postwar reconstruction is expected to take at least a decade. Still, Mr. Stiglitz said the decisions made today could shape what happened during that time.

Recent changes to labor laws approved by the Ukrainian Parliament have become a focal point of the differences. Mr. Stiglitz and other critics warn that worker protections are being dismantled, noting that employers are being given more leeway to set hours, change working conditions and lay off workers while weakening unions’ bargaining power.

Ukraine is undermining labor protections when the European Union is strengthening legal obligations to promote collective bargaining, said Luke Cooper, an economist at the London School of Economics. Military and economic success depend on buy-in from citizens, and that effort will be hampered if workers feel their protections are being weakened and wages lowered.

To supporters, though, the modifications were a much-needed overhaul of sclerotic and outdated Soviet-era rules. The old labor regulations, Mr. Gorodnichenko said, required employers to keep people on the payroll even if the entire factory had been destroyed or workers had left the country months earlier.

“What we said in the report is not controversial in Ukraine at all,” he said. “The situation is so dire, something has to change.”

Tymofiy Mylovanov, a professor at the Kyiv School of Economics and a former government minister who also contributed to the center’s policy papers, said the push for deregulation was not caused by blind faith in a market economy, but rather worries that public institutions were not developed enough to handle the task.

He said that he agreed with Mr. Stiglitz’s general critique but that many of the on-the-ground problems facing Ukraine were far removed from the theoretical discussions about government control and market deregulation. Ukraine is a “transition economy” and “teenage democracy,” he said. Severance pay or a two-month advance notice for layoffs isn’t relevant when businesses have been destroyed and need to rebuild, Mr. Mylovanov said.

Incompetence and corruption plague both the private and the public sectors, Mr. Mylovanov acknowledged, and a balance must be struck to root it out. The National Anti-Corruption Bureau of Ukraine recently accused a property developer and former lawmaker of offering the mayor of Dnipro a 22 million-euro bribe to get the contract to build the city’s subway system.

“The resilience of Ukraine’s economy will come from cooperation,” Mr. Mylovanov said, “from market institutions and state institutions working together.”

The scope of the task is mind-boggling. Ukraine has recently driven back Russian forces, but the pace and destructiveness of Russian attacks on civilians and infrastructure has picked up, with Moscow targeting power facilities, fuel depots and waterworks. Some cities have been nearly obliterated, and the path of devastation is wide and deep across the country, affecting factories, homes, offices, phone lines, hospitals, churches, warehouses, ports, railways and farmland. The country’s gross domestic product is expected to plunge 45 percent this year, according to the World Bank.

Nearly eight million people have sought temporary refuge outside the country, while seven million inside have been displaced. Education, social and health services will need to be restored along with the physical infrastructure.

Estimates of the total cost have varied widely and are still being updated. Over the summer, Ukraine’s prime minister put the price of reconstruction at $750 billion. Every day that the war continues, that figure increases. Even if much of that cost is borne by other nations and global organizations, Ukraine is expected to rack up big debts and will need a healthy economy when the fighting ends for a sustained recovery.

“You don’t achieve that with much heavier involvement of the private sector,” said Matteo Patrone, the managing director of Eastern Europe and the Caucasus at the European Bank for Reconstruction and Development in Kyiv.

The development bank, which has been providing Ukraine with hundreds of million of dollars in emergency loans, guarantees and donor grants, has a mandate to “foster the transition toward open market-oriented economies to promoted private and entrepreneurial initiative.”

Even so, Mr. Matteo remains optimistic. There is a broad consensus about overall aims: Ukraine must be transformed into a modern democratic state and market economy with a strong judiciary and strict safeguards.

The industrial base has been destroyed, but Ukraine is oriented toward Europe and is appealing to Western investment. It has an educated population and a competitive advantage when it comes to agribusiness. And, Mr. Matteo added, “Ukraine has strong and vibrant civil society.”

Biden, Battered at Home, Basks in Unvarnished Praise in Israel